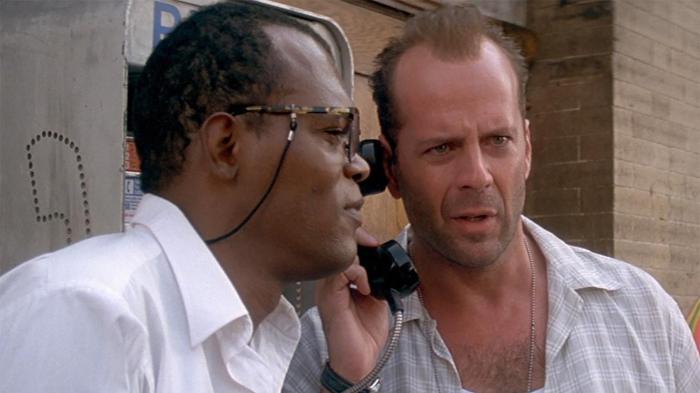 Somewhere back in the mists of time, in—*checks notes*—five years ago?!—I wrote a little thing about how much I love the masterpiece that is Die Hard With A Vengeance. If I remember correctly, the thing that finally got me write the piece was my remembering—again, for the thousandth time—how much I adore the little moment that Bruce Willis’ John McClane confronts the surly, mega-NY kid riding his bike after shoplifting some sweets. It’s the moment that the penny drops for McClane as to what might actually be going on while he and Samuel L. Jackson’s Zeus are being led on their merry little goose chase around the city. It’s a truly beautiful little moment, played and directed perfectly, and it remains one of my favourite ever examples of one my favourite ever plot cliches. There’s something about penny drop moments—particularly when they involve a character realising something that the audience already knows—that just gets me every single damn time. Quite often here I gently take the piss out of plot contrivances and lame tropes, but the flip side of that is that tropes and cliches are not always a bad thing. If done well, they can be immensely satisfying storytelling tools and a source of great enjoyment. Twitter pondered this the other day when its users thought about their favourite plot cliches. You can follow the rabbit hole down here:

Personally, I will always stand up and cheer for a character who's been fueled by anger or pain and learns they can be even more powerful when they run on love or joy. Deeper magic from before the dawn of time. Oldie but a bestie. Cheesecake. Gimme that shit.

I will always root for redemption, that’s my bread and butter, I love seeing people return to the light

1. The detective gathers everyone in the accusatorium to recap the movie

The moment in the detective story where the entire plot is spelled out and the murderer is IN THIS VERY ROOM!

Super rich and successful lonely lady who finds meaning of life through poor nice guy who is chill and maybe widowed with a kid sometimes too.

I call this “Pulling a Pixar”

When it looks like the heist or con has gone spectacularly wrong but, no, actually the protagonists planned for every eventuality and everything fires like clockwork.

Slightly different but my favorite cliche is running through the airport (or city) after your lover. I love it. Never mad about it ever

I adore a good villain triple bluff.
You thought the evil guy was Bob, but actually it’s Hannah… but no, twist, it ACTUALLY was Bob!!!!

look, any time a camera dollies in on Kate Winslet's face while her eyes glisten, or holds on Julianne Moore's while she stifles a sob and a single tear runs down her cheek, I am REKT

When the detective is conversing with another character, who says something unrelated to the murder, but the detective has a flash of realisation, inspired by the unrelated thing, & all becomes clear to them. Then they say something like “I’ve been so blind / stupid/ foolish” pic.twitter.com/vKn7Q4o3es

Oh, that's the villains favorite song because it reminds him of someone he lost huh? I'm sure it'll never be used against him!

i will always be emotionally touched when it turns out that love is more powerful than time, distance, magic, evil, the laws of physics, etc. this is why “interstellar” works for me lol. 🥹

Also transformation sequences. Even little ones like this classic oldie:https://t.co/jDxidxgXFv

Assemblage montages, showing something being built or created (e.g., the barn building scene in “Witness”).

I think it stems from my 1960s childhood. We used to be shown brief films in school on stuff like how pencils were made.

The "Han Solo Moment", where the guy who's "just in it for the money" cuts and runs right before the final battle, only to come charging in when things look the bleakest for the remaining heroes.

It was all a dream.

Naive group of youths upends an evil plan thousands of years in the making using pluck, luck, and something insane like a sword of pure light or a magical explosive or a mimic that looks like a comfy throne.

The Dramatic Last Minute Rescue Accompanied By The Appearance Of The Main Themehttps://t.co/Fp954DrzJL

I like a fake safe haven ending. The hero has battled all the enemies and gone home only to find the big bad boss threatening his child or loved ones. (Ant Man, Aliens)

This dynamic, most often found in fanfic: pic.twitter.com/W2Aq1S3IX8

That thing in whodunnits where they make it really obvious that THIS CHARACTER is going to be important later, and then they don't show up for an hour or two so you forget about them, and then they get revealed as the killer. I fall for it every time.

To be very white boy about it, when Lester Freamon in the first season of The Wire stops working on dollhouse furniture to actually get a picture of Avon Barksdale

Even better: When the hero says that

An expansion of this: The friend they had a falling out with also showing up unexpectedly at the last moment because they still love and care about them

Or when there's only a small amount of soldiers and it's no big deal, but then when you zoom out or peek over the hilltop there's like a million soldiers

one protagonist goes through an obstacle with an array of flashy moves and as they finish their acrobatics exhausted and out of breath, the other protagonist crosses the same obstacle with ease like all they had to do was turn the doorknob

When the solution to the problem was the thing right in front of their eyes. They simply misunderstood the message and needed to take it more literally/simply. And it’s hilarious when they DON’T get it in time. As in “There’s always money in the banana stand.”

Death is a chill dude who’s mostly there to be like “Hey, you’re dead, sorry bout that. If you find a way back then that’s cool.”

I love reapers and death deities who treat it like a bureaucratic system or a social working case, with a bit of sympathy and even humor. Top tier

Following up on that. When the heist plan that they montages or explained fails but the next layer of the plan is the one that was meant to succeed.


← Trailer Watch: The Good, The Food, And the Lena Dunham | Trump Allies Are Warning Republicans to Lay Off the FBI Because Something Big May Be Coming →