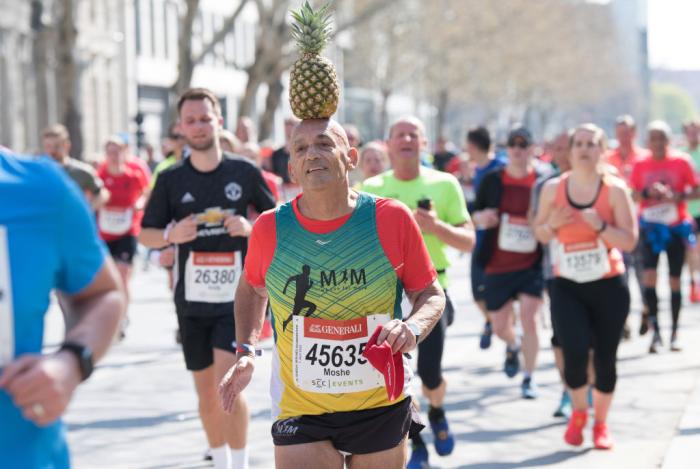 Oh yeah, it’s that time again! Time for one of my absolute favourite genres of post: Facts That Do Not Sound Like Facts But That Definitely Are Actually Facts. It’s a catchy title, I know. On this occasion it’s kicked off by writer Eric Michael Garcia taking to Twitter and asking for, as he hilariously put it, facts that sound like shitposts. The thread has many more gems than I could capture here, but I’ve sourced some choice cuts below:

What is a fact that sounds like a shitpost but is 100 percent real?

Another one: Jeb Bush and Bill Belichick went to high school at Phillips Academy in Andover at the same time.

Fun additional fact—when people used to work in pineapple canneries, if they did not wear gloves, they would lose their fingerprints because the acid in the pineapple would eat away skin.

Nowadays I’m pretty sure that we automate the canning process for pineapples with machines.

Gandhi and Winston Churchill both served in the British armed forces in the same battle during the Second Boer War, for which Gandhi recieved a medal. https://t.co/F8dMuZ8LCI

That must have been awful, but it doesn't excuse what they did.

I can’t even be bothered to type it out any more. https://t.co/yXe4kg6PoF

Would’ve thought the beards would be a dead giveaway. Same thing happened to Orpheus and one of the ringers was Chevy Chase. @JahHills details it in ‘Astral Weeks: A Secret History of 1968’ and the band tweeted about it a few years back 👇 https://t.co/yjq20sTnXy

When he lived in France, Samuel Beckett would sometimes drive (the future) Andre the Giant to school.

Amanda Bynes’ peace sign was edited out of her teen comedy movie poster in 2003 because of the US invasion of Iraq weeks before release, and ongoing invasion of Afghanistan, that led studio execs to worry it would be seen as an anti-war sentiment. https://t.co/ot5lZMGsGI

Birds that navigate by the stars are older than the zodiac. Several zodiacs. Constellations have come and gone over millions of years as the sun moves and stars die, and each generation of bird learns the current sky as a hatchling.

Hippos were almost released in Louisiana as a way to control invasive plants and as a food source for people pic.twitter.com/Zk1raKrjLH

Yeah, Robert Lincoln. Not only that, but out of the 4 presidential assassinations, Robert was present or near the site of 3 of them (Lincoln, Garfield, and McKinley). He stopped going to presidential events saying, “there’s a certain fatality about [them] when I am present."

This is one of my favorites because it’s unambiguously a far bigger crime than Watergate, and LBJ knew but couldn’t or wouldn’t do anything about it

flew it in his sleep,

chased a Nazi fighter under the Eiffel Tower and shot it down, and

having dumped all his ammo to smuggle beet vodka back to base, intimidated a Nazi fighter pilot into bailing out.https://t.co/G5UHURy35G

He also illustrated and wrote children's books including this edition of the Battle of the Frogs and Mice that includes really graphic illustrations of frogs and mice killing each other. pic.twitter.com/AcAUar8Peu

The current King of Jordan (Abdullah the 2nd) had a non-speaking walk on role on Star Trek Voyager .. is the one in Blue in this cliphttps://t.co/f1GDOz0AU6

Related: for the last several years of her life, her rent was paid for by the founder of Little Caesar's.

I thought that was Eleanor

During Whitney Houston’s iconic Super Bowl performance of the Star Spangled Banner in 1991, the vocals were prerecorded and she was signing into a dead mic.

There are more atoms in one grain of sand than there are grains of sand on earth.

Bret Hart was among the casting choices to play Batman after George Clooney.

As it turns out the sung lyrics are mostly gibberish and contain no explicit content. However the drummer broke a stick during the recording process and can be heard yelling ‘fuck’ in the background. The FBI completely missed this.

Every Democrat to serve as a US Senator from Vermont has appeared in a Batman movie.

Before he was in Star Wars, Harrison Ford was Michelle Phillips' weed dealer.

Jacqueline Kennedy Onassis was the descendant of a Dutch pirate who converted to Islam, raided Iceland and England, and was the head of state of an independent pirate republic in North Africa.

Jimi Hendrix opened for the Monkees on an American tour.

All the planets in the solar system could fit between the earth and the moon.

There was an assassination plot against Jimmy Carter by a man named Raymond Lee Harvey. One of his accomplices was apparently named Osvaldo Espinosa Ortizz (“Osvaldo” is roughly the Spanish equivalent to Oswald). Even the FBI found this bizarre.

That James Williamson guitarist for The Stooges later spent 15 yrs working for AMD designing products for their chips. He also became Sony's VP for Technical Standards and helped codify standards for Blu-Ray. He then retired and re-joined The Stooges and Iggy Pop

No i think he was Phil Collins even then

In 1956, an intoxicated man stole a plane from NJ on a barroom bet at 3 AM and flew it without lights or radio to land it in the street right in front of the bar where he'd been drinking,a few minutes earlier,in Manhattan.Two years later he did it again,blaming "the drink."

All the gold ever mined in the history of the world would together fit in 2 Olympic-size swimming pools.

There are about 150 million starlings in North America. They are all descended from 60 birds released in Central Park, by a guy whose motivation was to introduce them to America because they had been mentioned in Shakespeare.

They are also older than trees.

Four US presidents were in Dallas the day Kennedy was assassinated in 1963.

Peter Mayhew was kept under close watch on the Northern California set of “Return of the Jedi” out of the fear that if he wandered off set in his Chewbacca costume he’d be shot by hunters who thought he was Bigfoot https://t.co/KHUWBNimoc