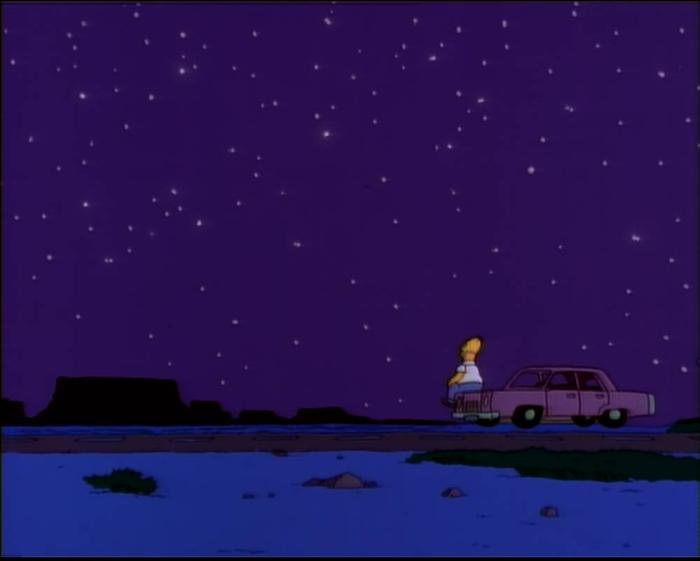 Twitter Users Ponder the Most Heart String-Tugging 'The Simpsons' Moments

I think one thing that’s often forgotten about The Simpsons is just how hard-hitting emotionally it could be. With each passing year, as supremely meme-able moments like ‘steamed hams’ ascend to more pervasive levels of pop culture discourse, it feels like the heart the show used to have—especially in its earliest days—gets remembered less. I certainly tend to forget sometimes. For me The Simpsons ‘golden era’ is the run from season three to about eight or so (and that era is for my money, without question, the greatest run of television ever, followed by The Wire, of course.). I tend to revisit the first two seasons less, which is where some of the most truly heart-rending moments can be found, so it makes sense that I would occasionally forget, but nevertheless, those moments aren’t confined to the initial two seasons. The heart, the humanity, is very much a part of the fabric of the show right up until the end of the ‘golden age’—and maybe even a bit further, I dunno, I have seen very little of the period after season ten or so. Twitter users pondered some of this heart the other day when writer Will Harris asked what the most heart-tugging moments of the show were:

The most legitimately heart-string tugging moment in the entire run of The Simpsons? Discuss. pic.twitter.com/OiBIw8umw7

My favorite emotional moment from The Simpsons is Bart breaking down in front of Mrs. Krabappel in "Bart Gets an F." The fear of realizing your best effort doesn't mean squat really hit home with me. pic.twitter.com/OuFWH7jPu1

This moment in "Bart the General" changed me forever. It really captured the utter helplessness you sometimes feel when you're a kid. Especially when your parents, however well-meaning, can't help you. pic.twitter.com/bsGorY50Gh

we all know there's a bigger one pic.twitter.com/NGU5L0R46r

I just rewatched “I Love Lisa”, and the moment that, even for a brief, fleeting instance, Ralph went from a cheap punchline to being a complex character with emotional range really floored me. This was best exemplified by the scene where he acts the heck out of the school play. pic.twitter.com/b7DfMwRw74

People forget this cuz it's Season 1, but Marge's words to Lisa here always get me. One of the healthiest, sweetest, frankest means of addressing depression that I've seen.https://t.co/obVTX7hCy4

2) Bart and Lisa whispering into Homer's ear to tell him what to tell his kids if he doesn't make it through surgery.

Honestly Frank Grimes' death might have been sadder. A very unhinged and troubled but ultimately sympathetic man died…and no one cares basically.

I've always found the muted, mundane horror of the final credits sequence in "One Fish Two Fish" to be very powerful. Homer watching bowling, gorging on light pork rinds after vowing to treasure his life after a brush with death. https://t.co/qHFFmpAJM9 pic.twitter.com/CfgHXLSLVU

Kills me every time I watch this episode https://t.co/CDIZMuisTX pic.twitter.com/njvQ86w8cp

Here’s one that might only mess me up: The last min of “Lisa’s Wedding,” after the flash-forward, when Lisa finds Homer back at the Ren faire. He’s *so excited* to tell her about his day eating fudge and riding the teacups and she’s happy to share in his triumph. Wrecks me. https://t.co/jKoIQmQYIH

I have cried at least three times at this moment as a full-grown adult. https://t.co/PJiFCVRCvD pic.twitter.com/eAetq0mh7u

personal fav is the few scenes of last temptation of homer https://t.co/x2ZtZ9dv8J

end of duffless… raindrops keep fallin on my head gets me every time https://t.co/eDKgISI3Ct

It’s either this or the moment when Frank Grimes comes to the Simpson home and sees that his lifetime of struggle has earned him 1/100 of what Homer has blundered his way into. One of the two. https://t.co/aIdtTWdOqE

Lisa the Iconoclast - where Homer actually backs up Lisa.
“I believe you honey”
“You do?”
“Of course I do, you’re always right about this type of thing and for once I want in on the ground floor.”

Its just good parenting from Homer that you don’t really see on the show. https://t.co/XEqq4SdiKo pic.twitter.com/xobUghzdQV

Really love any time Bart does something really nice for Lisa. https://t.co/CF8G5WP0Sz pic.twitter.com/mOyjKC6rwI

← It Sure Didn't Take Long for the Racist Nonsense to Start, Did It? | Donald Trump and the GOP Now Welcome an Openly Racist, Anti-Semitic QAnon Conspiracy Theorist →