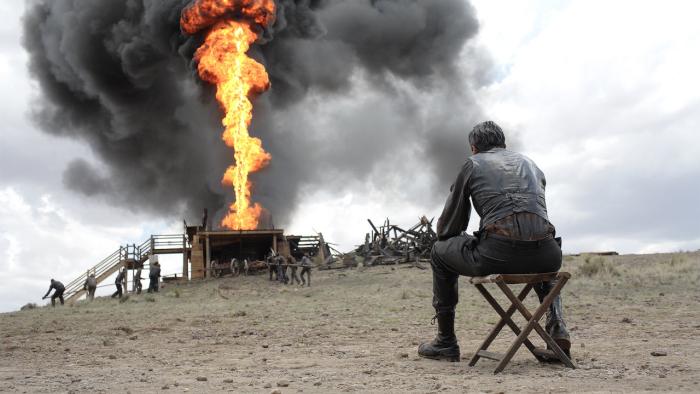 So I saw this Twitter prompt the other day—

What is the best movie you've ever seen where landscape plays a vital role? pic.twitter.com/PPvrdO5uId

And it immediately made me think of two films I had seen recently. The first was Paolo Sorrentino’s Hand of God. A beautiful and bittersweet coming-of-age film based around Sorrentino’s childhood in Naples and anchored on the city’s deification of Diego Maradona, Hand of God opens with an absolutely stunning sequence in which the camera sweeps over the dark blue waters of the Gulf of Naples. Rushing forward and slowly adjusting its gaze upwards as it does so, the view gradually reveals to us the city itself, partially painted golden as it succumbs to twilight. The camera tracks West, following the coastal road that separates Naples from the sea, taking in the stacked apartment buildings that cascade up the hills that lead away from the water as well as the marina dotted with a hundred boats and eventually rotating to reveal the promontory of the Posillipo coast where Naples slips into the water. It’s a striking, indellible opening, and it cements a core truth: Naples is as much of a character here as anyone else.

The other film the Twitter prompt made me think of was 2019’s This is not a burial, It’s a Resurrection, Lemohang Jeremiah Mosese’s incredible depiction of one woman’s refusal to allow the forces of faux-progress to sever the land’s connection to its people. Late South African actress Mary Twala Mhlongo superbly plays Mantoa, an 80-year-old who stokes her small community to resistance against the resettlement being forced upon them in the name of dam construction and land redevelopment, and it is that huge, verdant land which also takes on a central role in the film. Film writer Guy Lodge described This is not a burial, It’s a Resurrection as ‘a haunted, unsentimental paean to land and its physical containment of community and ancestry,’ and that feeling bleeds from every frame.

Here are some of the thoughts that Twitter had in response to the prompt:

The obsessively claustrophobic form of the landscape reflects Jack’s internal conflict. The labyrinth-like hallways of the hotel allow for this landscape to continue indoors - it’s quite beautiful and flawlessly executed #Filmmaker pic.twitter.com/iE9PwWKTC1

Nic Roeg's WALKABOUT. Never has a film used the savage beauty of the Australian outback to such devastating effect. One of John Barry's finest soundtracks as well. https://t.co/9juGYwG1CE

Under appreciated gem of a film, San Francisco as a character has never looked sweeter. pic.twitter.com/NlmJ7yHPOk

So many great answers. Going way back for this one, but von Stroheim filming the final scene of "Greed" in Death Valley in the 1920s was insane https://t.co/5MVADbesE7

One of many breathtaking views from “Kundun”! pic.twitter.com/FvVoLUObKE

There’s so many! I’m surprised no one has mentioned “The Naked Island” yet! pic.twitter.com/ggUdyHGR1G

The Power of the Dog. pic.twitter.com/ZCOx2fFn20

These two (and the wetlands in True Detective, Season 1) pic.twitter.com/DEGJgSkQe5

THE REMAINS OF THE DAY pic.twitter.com/9rDpgLIYUj

Apocalypse Now. The River is like a pagan god testing the characters. pic.twitter.com/Hd5Y55Trvq

‘Lawerence of Arabia’. It’s a superb film and a work of art, David Lean’s masterpiece. pic.twitter.com/UrLUkhlRJI

I'll say a movie I imagine no one has said. Eternity (Wiñaypacha) pic.twitter.com/7TtdDzowAc

A lot of great ones already said so I'll say the urban landscape of Drive pic.twitter.com/40rU5E8k4f

Aguirre: Wrath of God. The landscape itself is a lead character. pic.twitter.com/wBforbQfWq