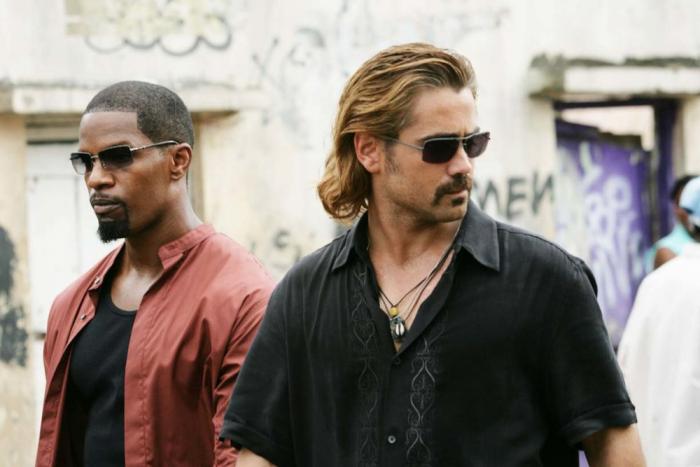 So, we’re all in agreement that 2006’s Jamie Foxx and Colin Farrell-starring Miami Vice is a damn good film, right? We’re all in agreement on that, no? No? Still no? It’s okay. I’ll wait. You’ll come around. I know I’m sort of expected to hold that opinion, huge Mann stan that I am, but though it may not be his best, I still think there’s a lot to love in that typically melancholy and lyrical movie. It might not be to everyone’s tastes—in fact a number of people I know that are usually fans of Mann’s work have told me multiple times they just can’t crack through Miami Vice’s cool, reflective shell—but I genuinely love the film. It’s Heat or Collateral, but it’s great anyway. I am aware that I’m in the minority though. And you know what, that fuc*ing rocks! I’m happy here, knowing I’m right, waiting for the newly converted acolytes to gradually walk through the door one by one. Come on in, come on in, pull up a chair, here’s your complimentary shirt ‘n’ shades combo.

Miami Vice was the first film I thought of in response to the following Twitter prompt about films that were universally panned, but which you yourself can’t help but think are great:

What’s a critically reviled film that you think is great.
Not like, “it’s a guilty pleasure”, but a movie you’re like, “what is wrong with everyone? This is good.”

As always, we occasionally stray a bit from the strictest interpretation of the question in some of the answers, but here are a few interesting ones:

It's too long and it's too loose, but there's a terrific 90-minute movie within the 150-minute LONE RANGER.

Does Titan AE count? I'm scared of getting into "unknown gems" territory instead of "I love them despite all the hate" territory

A Goofy Movie. I know it’s going to shock a lot of people to find out that this perfect movie was critically reviled, but I’m sorry to inform everyone that movie critics are in fact soulless hacks

I don't know whether dog lovers feel the same way, but Beethoven is a film that makes me feel good whenever I watch it! It's the perfect Fall movie, due to the abundance of colourful leaves and sweaters. And where else do you see 1960's everyman Dean Jones playing a villain? pic.twitter.com/u0zokEiIHM

Grease 2. I do see its, uh, flaws but it genuinely gives me great joy, and the music is brilliant, and Michelle Pfeiffer just glows.

A hilarious and creative dark comedy about the greed behind children's TV. It has amazingly complex performances from Robin Williams & Edward Norton. As well as a rare directorial turn from Danny Devito. But the ad campaign sold the movie 100% wrong.

Let me finish. Its a HORRIBLE adaption of the source material. But as a stand-alone pseudo sci-fi adventure its fun! I love that weird humor and irreverence like Big Trouble In Little China. Plus the OST is dope AF.

Observe and Report.
John Carter.
The Lone Ranger.
Valerian and the City of a Thousand Planets.
All About Steve.

I, Robot. It's not at all a "worthy" adaptation of Asimov's work—I remember hearing that it was a generic action flick that was retooled at the last minute—but it has a few references here and there, and I think it's genuinely a fun, relatively intelligent action movie.

Hudsocker Proxy! A brilliant comedy with a great story and performances, yet film critics feel the need to make it out to be a rate Coens misfire

Look, you all know me. pic.twitter.com/SWuiKcwr70

Clue. My favorite comedy of all time, and it was absolutely savaged by critics. pic.twitter.com/LzNYBwR2Ig

The Ang Lee HULK. While I do think it’s a misfire, it’s a much better and more interesting one than anyone credits it with. Though I do wish it had Mark Ruffalo.

Low ratings, and I haven't really met anyone who seemed to like it, but I think it was pretty funny, and definitely underrated. pic.twitter.com/bHiAUAKoNQ

Alien3 gets a lot grief, but it stands out because in spite of all the studio meddling, Fincher’s skill as a director and auteur still shines through to give us a film that explores the various horrors of being alive.

I genuinely love Hudson Hawk and was confused by how reviled it was. It has issues but I think how deftly it completely embraces its bizarre characters and sets up a universe with singing cat burglars (a concept I adore) and weird assassins named for candy bars is just great

Alien: Covenant is a mean, depressing film that borders on nihilism but it's oddly beautiful in a way not a lot of franchise movies dare to be, like the titular creature. Thought it made a good double bill with Blade Runner 2049. pic.twitter.com/PQ04FS0qxa

Hook is great! Robin Williams and Dustin Hoffman are terrific. The John Williams score is fantastic. The special effects are amazing. Rotten Tomato score is 29%! 😮

Last Action Hero is really great. If you disagree I will send you hurtling into an ice cream truck which will inexplicably explode. Lodging an ice cream in the back of someone's head as I say "I iced that guy, to cone a phrase".

Robert Altman’s “Popeye.” A friend claims to have been at a NYE party with him. Too shy to talk to him, he told Altman’s wife that it’s his favorite of his films. She replied: “It’s his too.”

Josie and the Pussycats!!!!!

The Village.🥺 it was just marketed poorly, it’s such a good speculative film

Nobody else seemed to like it but I thought "The Hitchhiker's Guide to the Galaxy" was actually pretty great. And I say that as a big fan of the books.

The Wachowskis' SPEED RACER. I think it only got trashed at the time because there's nothing else like it. Still the only time someone's pulled off a live action anime. pic.twitter.com/NrLMwsQRUu

Tank Girl. It came out when I worked as a projectionist in a cinema & I would find any excuse to watch it from the projection booth. I'd love to one day see @rtalalay do a director's cut of it with the proper ending & not the animated sequences. pic.twitter.com/8UJQAMv9IW

It's been a long weekend and I'm not in a mood to argue with anyone but I really liked "Showgirls," so much so that I watched it for a second time while it was still in theaters (back in the mid-90s). To me it was a great indictment of American excess and greed.