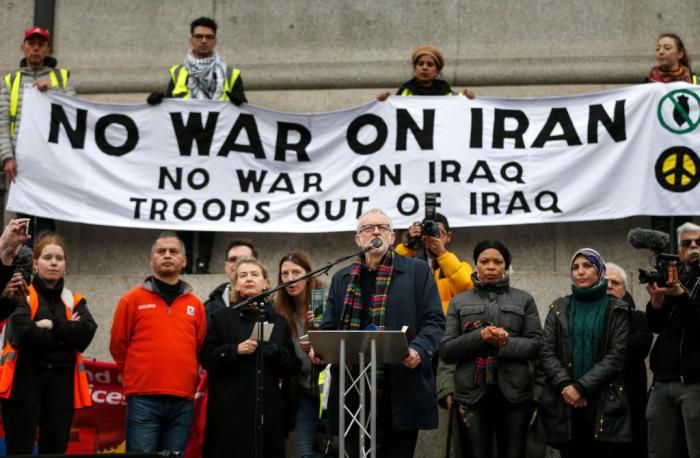 This is a subject matter which I really have no interest in debating anymore. On the matter of Jeremy Corbyn and the Labour Party, I have said enough. For the unique historical moment that briefly flourished and burned bright enough to awaken a long-dormant hope in millions before being snuffed out by forces too great to overcome in such a short timeframe, I have, on the other hand, not yet grieved enough, and a time will come when talking about it will be possible. Thinking about that day in December, of twelve hours trudging from door to door beneath a cracked, weeping sky, during which the material holding my shoes together gave up but the thousands of us pounding the pavement in a fight for a future that felt within grasping distance did not, I still find myself far too raw and not prepared to talk about much. But as the great poet Pablo Neruda once wrote—in a passage that Jeremy Corbyn was himself fond of quoting: ‘You can cut all the flowers, but you cannot stop the spring from coming.’ Or, to put it in the words of another departed titan of the movement:

2019 closed out with an unspeakably sad moment. But spring will come. Though he will continue to serve as the overwhelmingly popular MP for his constituency, yesterday was Jeremy Corbyn’s last time at Prime Minister’s Questions as the Leader of the Opposition, as the Labour Party gears up to elect his successor as leader in April. He used the opportunity to do what he has spent his entire political life doing: Speaking up for the least privileged and most vulnerable in society.

Never known a politician be so willing to brush off non-stop character assassination for the cause. You've planted the seeds of democratic socialism in the minds of millions, & reminded people that we should care for one another. This will bear fruit in the long run. Thank you

Afterward, Twitter said goodbye to Jeremy Corbyn as the Leader of the Opposition, and expressed thanks to a tireless campaigner for social justice who would continue to do exactly that for as long as he is physically able.

Today Jeremy and John spoke in Parliament as Leader and Shadow Chancellor for the last time.

Before speaking in a debate about emergency economic measures, I had an opportunity to pay tribute to them for giving me and many others hope of a better future. pic.twitter.com/wj7D4N3qfp

it's hopelessly foolish, of course, to hold a politician in affection, particularly a labour mp, but jeremy corbyn means a great deal to me. perhaps too much. i owe the movement he inspired everything for breaking me out of useless nihilist malaise. solidarity forever, big man!

I want to pay tribute to .@jeremycorbyn who did his last PMQs today.Jeremy is not only one of the nicest people in politics hes changed the direction of British politics which will be his legacy. To say he did this against all the odds is a massive understatement
Oh Jeremy Corbyn pic.twitter.com/8YvcOBnqrQ

I never believed things could change until Jeremy Corbyn came along. Now more than ever I know things can and they must, so we keep fighting with you JC, thank you for being a class act and inspiring a generation ✊🏽 #CorbynWasRight https://t.co/7ln0KWzVq3

#ThankYouJeremy for showing us that change from below is possible and for the immense strength and determination you’ve shown. Our movement is stronger for it and I look forward to continuing to campaign alongside you. pic.twitter.com/LZdftyEnUo

I think a lot of us will be grateful to this guy for the rest of our lives, for caring, for speaking to and not at us, and for convincing us to actually give a shit, because we might change something.🌹 #thankyouJeremy https://t.co/jjdIvlNlRw

To me, @jeremycorbyn is and will always be compassion personified! Thank you for everything, Jeremy!
The People's Prime Minister 🤗#ohjeremycorbyn #thankyouJeremy pic.twitter.com/zgHqDkvoWG

Millions in Britain now know what is possible. They know what must be done, and how it shall be done. Whilst reactionary forces have presently overcome us, they will in time be beaten back. When that time comes, we shall have our moment.

Goodbye Jeremy Corbyn, a man of principle and integrity who frightened the elite, the entitled, the establishment to their venal, selfish, hypocritical core. I, like hundreds of thousands of others, rejoined Labour after 30 years because of you #ThankYouJeremy https://t.co/sAR0YjPycw

We almost made it and we'd never have got so close without you. pic.twitter.com/cNRphVDfso

#ThankYouJeremy for encouraging my mum, in the green, to join a union. Now, even though she cant work because her workplace has been closed because of the Coronavirus, the majority of her income will be protected because of your advice. JOIN A UNION NOW!
✊🏾 SOLIDARITY. pic.twitter.com/tpeVnMtPv4

Let me say this….No matter how long we wait we will NEVER EVER have a party leader at the despatch box with the dedication compassion honesty decency integrity & principles that he has in abundance.

JC I salute you !#NotGoingAway

Thank you for everything Jeremy. Few will ever know the burden you have shouldered for us all. Solidarity forever. The fight goes on. #UnityIsStrength https://t.co/lJBBmL9zh6

A few weeks ago we had a party for @jeremycorbyn in Hackney. I spoke briefly. I said that his 2015 campaign expanded my political imagination. When he won, something that was supposed to be impossible happened. I see the world and my place in it differently now. #ThankYouJeremy

The best PM this country never had! 😭 pic.twitter.com/6hyQkrNYuo


One for the archives from last day in @HouseofCommons for @jeremycorbyn and @johnmcdonnellMP as Opposition Leader and Shadow Chancellor.

Paid tribute in Parliament to both these decent, down-to-earth and dedicated men. Has been an honour to serve as PPS for the @UKLabour Leader. pic.twitter.com/817leT9OvP

Well thats it. He did his last PMQs.
i cannot even describe how much this man has changed my life.
Thank you @jeremycorbyn and here's to the next chapter 🍾Thank you for walking through the fire for us. You planted the seeds. Now watch them grow. #thankyouJeremy pic.twitter.com/mdY2zM9hbV

It was Dad's last PMQs as Labour leader today. People will never know how close we came to having a truly decent man, who would've looked out for every single one of us, in the top job and the possibilites for a better world that would have come with it. pic.twitter.com/zIn45uTTCY

A whole new book of dirty tricks was created in order to beat him. Our job over the years will be to get to every nook and cranny of that book. His defeat was anything but organic and history will vindicate him as it always has. https://t.co/l8wMcyHdFd

History will look upon @jeremycorbyn with much kinder eyes, I am sure of that. Thank you for stepping up and changing politics forever, unleashing a hope in millions. We will build from the ashes of our defeat, more organised & determined than ever. pic.twitter.com/uFH3aB8MLB

A sad day.
For 5 years, I've felt hope.
Hope that we can create a kinder, greener, more peaceful world.
Hope that we can achieve the deep change we need to avert climate disaster.
The powers that be did all they could to destroy this alternative & it's a profound loss for us all. pic.twitter.com/zqNkHG8ipD

I wrote for Tribune about Jeremy Corbyn. He made mistakes and he didn’t win, but his legacy is now the responsibility of the thousands who have been inspired thanks to his profound decency and superhuman strength of character. https://t.co/FEIh7AsrPb

As we hurtle towards a climate crisis yet still elect leaders who sacrifice our futures for profit, we may one day reflect on the man who offered to take us down a greener, more humane path.
Even those who smeared him may feel a pang for what was lost.
Thank you, Jeremy Corbyn ❤️