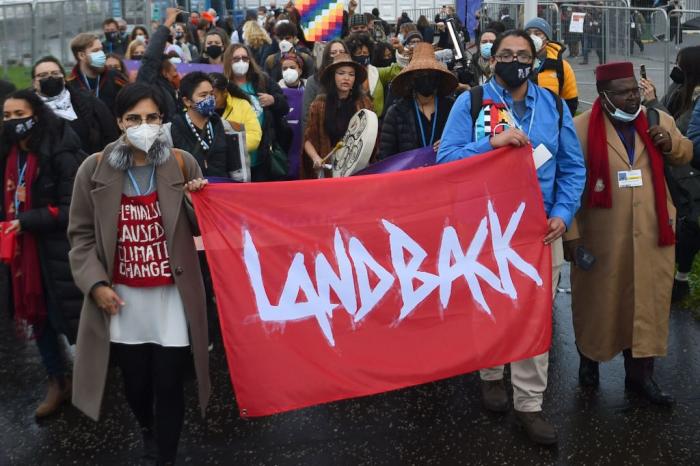 In the End, COP26 Showed Colonial Capitalism Carrying On With Business As Usual

Well, it’s over. The 26th United Nations Climate Change Conference, held in Glasgow over the past two weeks, wound up on Saturday night, late—as the majority of COPs tend to be—after negotionations were extended in order to reach an agreement across the 197 attending parties. The agreement reached has been, fittingly, termed the Glasgow Climate Pact. Probably its main victory was an agreement for countries to re-visit its emissions reduction plans in 2022—which is a necessary step up from the one-year intervals that we have been following up until now following the Paris Agreement—but its other main components include the first mention in any such agreement of a fossil fuel (specifically a commitment to limiting the use of coal), and a commitment to increased financial support for developing countries.

That last point is the one that really gets to the heart of why COP26 was such a failure: It sounds good on paper, and it was lauded in the corporate press as an enlightened move, but it gets absolutely nowhere near to addressing the scale of the problem that we—and specifically developing countries—face. The fact of the matter is that without addressing the colonial nature of the climate crisis—without acknowledging that it is a crisis made in tandem with the rise of an exploitative capitalism as practiced by the global North at the expense of the global South, and acting accordingly, specifically with provisions that take into account the role of Indigenous communities around the world—we are not going to be building any systems that will genuinely get us out of the worst of the catastrophe that is to come.

Developing countries came to COP26 with a quite specific plea: That those countries cumulatively most responsible for the emissions that have gotten the planet to the level of heating that it is already at (and projected to get to) should contribute fairly to the cost of averting the worst outcomes. Instead, they got crocodile tears and weak, toothless pledges: ‘Carbon markets’ that let rich countries pollute further while further financialising parts of the planet and displacing the work onto developing countries; promises by those same countries to limit funding to fossil fuel projects in the developing world while contiuning to ramp up similar endeavours closer to home; and meaningless ‘dialogue mechanisms’ for developing countries to begin to talk about the reparations and future protections that are due to them following centuries of colonial carbon vandalism rather than concrete plans to address them with the urgency that reality demands.

In other words: The colonial global North created a massive system of organised exploitation and genocidal violence, it got rich off of it at the expense of billions while polluting and bringing the planet to the brink of destruction; eventually it loosened those explicit bonds to create a world order that it could say looked in some ways ‘free’ when compared to its previous incarnation but which nevertheless operated on the same old power dynamics, now expressed through more insidious means, and when the enviromental chickens of its system of pollution and exploitation came home to roost it failed to do anything close to enough to shouldering its fair share of the burden in combating the crisis—a crisis that would hit those already suffering the hardest and the earliest.

Here’s how Twitter reacted to the ending of COP26:

2,4°C if all govts met the 2030 targets, 2,7°C with current policies.
These NDCs are based on flawed and underreported numbers. And this is IF leaders meet their promises, which judging by their track record is not very likely…
This is what some seem to celebrate today. #COP26 https://t.co/VNT4bxfPck

But the real work continues outside these halls. And we will never give up, ever. https://t.co/EOne9OogiR

If world leaders think COP26 was "a good step" because too many climate scientists, commentators, NGO leaders spin it and pat them on the back, then we'd have a double failure. We are out of time, folks.

I wish I could make the world realize what an emergency we are truly in.

Beware of the battle of narratives on COP26 outcome. Truth is that the outcome does zero for the vulnerable in the world, already suffering devastating climate impacts & again betrayed by rich polluting countries. Don't be distracted by the spin! #COP26 #LossAndDamage @CANIntl

The climate emergency is a global human rights crisis. Yet, negotiators @ #COP26 are proposing #Article6 of the #ParisAgreement support carbon markets over equity. Climate policy that fails to center Indigenous rights is a #FalseSolution. @JohnKerry @ClimateEnvoy, #NoRightNoDeal pic.twitter.com/lrDPnXH0Oi

“Countries are trying to cook their books with offset mechanisms that make them look better and commodify our sacred places. Article 6 must respect indigenous and human rights and free prior and informed consent.” @ErielTD @Indigenous_ca #cop26 pic.twitter.com/5Go5ul0XLk

"Net zero is the great escape of developed countries.. We refuse carbon colonialism." Bolivia, on behalf of the Like Minded Developing Countries at #cop26 pic.twitter.com/kZgHtZqMiP

#COP26 Bolivia slams the cover text. "This text assumes that nature is only in service of people’s needs, but nature has an intrinsic value. It is sacred. That must be reflected. 'Nature-based Solutions' was never negotiated here"

We’ve emitted 1/4 trillion tonnes of CO2 since Paris in 2015 when our ‘so-called’ leaders signed up to cut emissions in line with 1.5-2°C. Yet here at #COP26 world leaders collectively chose to sign a death warrant for many of our own children tomorrow &poorer communities today.

“The next time someone says ‘fossil fuel subsidies’, remember they are talking about our so-called ‘leaders’ using working people’s taxes to invest in the deaths of children & the planet.”

A big thanks to @DavidRVetter for making this letter alive via @Forbes https://t.co/zvSpFHDYte

My message on behalf of our #ClimateJustice movements to the Presidency of #COP26Glasgow #COP26 ‘hope rests with us not you & we don’t compromise on justice’ pic.twitter.com/dqyP3jMMvi

“It’s like saying, we know it’s an emergency but what we’re going to do is pay for a help line. Okay, great, so when I call this helpline will I get any help? No, it’s just the help line.” @chilledasad100 #COP26 https://t.co/4YmV7NIZ9U

The only good thing to come out of COP26 is that at least we now know with absolute certainty that our current leadership/system is utterly incapable of meaningfully addressing the climate and ecological emergency.

This is the closest thing I’ve seen to propaganda from a British journalist re climate. After a week in Glasgow I don’t know a single person who thinks outcome of #cop26 is ‘amazing’.

What I repeatedly heard, however, is that the media is miserable at communicating the issues. https://t.co/aALvuDcNbq

COP26 ignored human rights despite the UN Human Rights Council resolution recognizing the right to a clean, healthy and sustainable environment.
An absolute travesty that will fuel anger, protests + litigation. A stark failure to address the suffering of climate crisis victims.

Too many world leaders are more interested in representing the interests of fossil-fuel exploiting billionaires than people and planet.

But we have the solutions that have social and environmental justice at their core.

That's why we organise for our alternative

The US is exceptionally good at spinning the media so they're portrayed as "climate leaders" without actually committing to ANYTHING - then placing blame on developing countries instead. This is a perfect example & journos are already falling for it https://t.co/JcwxuBuk1i #COP26

People from the Global South aren't coming asking for help, they're providing the science and expertise to get us all out of this - just nobody is willing to listen to them or act upon it.

It's a straight fight for survival now.

The fight doesn’t end here because there is still everything to fight for. We are fighting for our lives and a safe future and we know we can win this together. We, the people with the open hearts, will make change happen.✊🏾 #COP26 pic.twitter.com/UdAZilHwbz

← 'Dexter: New Blood' Episode 2: Who Is Iris? | Time To Reclaim History From Idiots And Nazis →