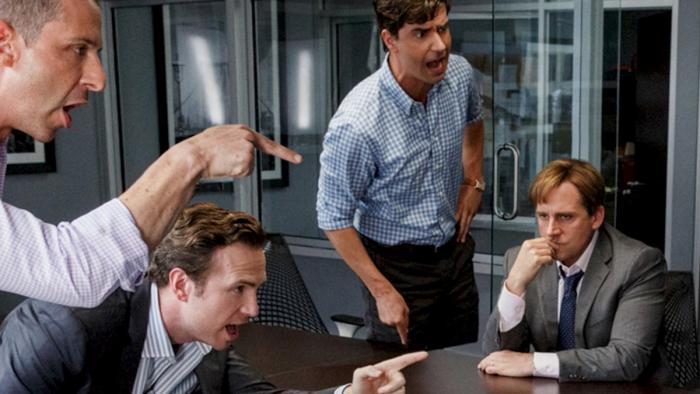 Capitalism, lol. Amirite?! What a gas. What a perfectly rational, wonderfully benign, and scandal-free economic system we’ve let a few people impose on the rest of us, eh? Such a laugh. And while sometimes you might look at capitalism and think: Jesus Christ, how fu**ing boring can you get while being so evil? But don’t sell it short, sport, your buddy capitalism is good for a laugh too! Remember that time in 2008 when a banker was caught manipulating the inter-bank lending rate, Libor—tiny changes in which cause billions of dollars to slosh around from place to place—as a favour to a mate in exchange for some day-old sushi. Hilarious! Capitalism is the slapstick general of an invading army that will pass through your town, razing it to the ground in the process while he observes from a whoopee cushioned seat in his tank decorated with memes. Anyway on that note here’s Twitter reacting to the news that a section of Reddit is planning to destroy a hedge fund by buying up stock in a company that the hedge fund bet on going under.

A few folks are correctly pointing out that this may take until Friday to go fully nuclear (that’s when a lot of contracts come due). Either way, tomorrow morning’s opening bell will be pure chaos.

oh no the wrong people are manipulating the stock market

/r/WallStreetBets about to blowup another hedge fund, this one valued at $13.1 BILLION before the Reddit trolls decided to all buy GameStop lol pic.twitter.com/aONX0SwEwb

If GameStop goes up another 17%, this hedge fund will instantly collapse. $13.1 billion gone. Poof.

Reddit is also in the process of meme-ifying AMC stock to revive it from the dead… this is like the Occupy Wall Street movement but on their own turf & with real financial consequences. Incredible. pic.twitter.com/r6WBhLebXo

/r/WallStreetBets has written an open letter to powers that be @CNBC - they threaten to continue to bankrupt every last hedge-fund since Wall Street has screwed over the average American & always gets bailed out. They actually make great points, read: pic.twitter.com/MuVEfKoCOR

after purchasing 2 shares of Gamestop stock as a joke pic.twitter.com/S8Kx8ddVBr

I would not jump on this bandwagon, as it categorically turns the stocks into a temporary bubble. But if they hang on to the stocks and drive up their value long enough for the hedge fund deadlines to run out, they are basically committing financial murder against these leeches

there is no difference here between some media analyst on CNBC telling you a stock is "hot" and a dumb redditor using a rocket ship emoji https://t.co/x7uFS45TTS

We let a half-million people die because a mass disease shutdown would have crashed the all-important stock-market, which is so stupid that it’s currently being gamified by Reddit users to blow up a hedge fund worth billions. Anyway probably nothing bad about our economic system

if you read about the creation of mortgage backed securities, the guys who invented them were big loud middle class guys who did epic food challenges and pranked each other. Redditors have always run the financial sector

To anyone that doesn’t understand what’s happening right now with Reddit and wall street: it’s okay, the stock market is literally useless and reddit is proving it right now.

seeing a lot of people laughing about the game stop reddit stock thing and yeah i understand why you might think that's funny that a hedge fund goes under but what if it was YOUR hedge fund that they were doing it to? not so funny then huh?

A bunch of bored Reddit and 4chan nerds rocketed Gamestop's stock through the roof for laughs but tell me again about how the stock market is a rational and fundamentals-based thing.

People looking for an explainer of the Gamestop thing:

The Gamestop thing is like Bitcoin, in that they are both just gambling.

At least the Gamestop people aren't pretending they're saving the world when they're recruiting more people on Reddit to get addicted to gambling.

you write on a piece of driftwood "this is the most valuable company in the world" and if enough already rich dipshits believe it, it becomes true

I have a hunch that the whole reddit thing is just cover for some Wall Street hedgefund guy trying to ratfuck a bigger hedgefund guy. I keep thinking back to how Michael Burry (guy who predicted the subprime mortgage crisis) owned 1.7 million shares of GameStop last September

Just to let y’all know, people on Reddit are buying lots of shares in GameStop to raise the price of the stock. Doing this will make billionaires who bet GameStop stock would fall lose a ton of money and it’s the most beautiful thing I’ve ever seen. pic.twitter.com/IjhSfQeuv1

neoclassical economics dictates that losers on reddit dot com are simply rewarding 'gamestop' for attaining greater efficiency and innovating. why do you hate this perfect system of allocating resources? https://t.co/yTwRoQKD5F

← First Look: Kristen Stewart Makes for a Convincing Princess Diana | Review: The Devil is in the Details of the Divinely Creepy 'Saint Maud' →