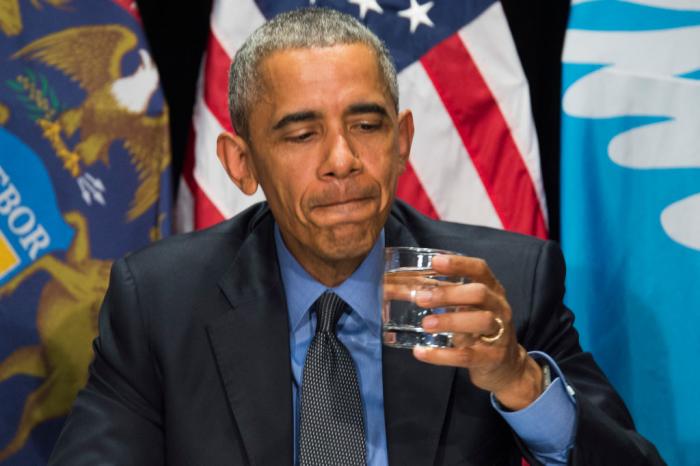 Amidst ongoing campaigns for Democratic Presidential nominee for 2020 that are in many ways shining a spotlight not just on the tactics of the Democrats but also on the very purpose of the party, former President Barack Obama had this to say at a speech he delivered over the weekend:

Former President Barack Obama warned the Democratic field of White House hopefuls not to veer too far to the left, a move he said would alienate many who would otherwise be open to voting for the party’s nominee next year. https://t.co/dsE58l8QHp

There was obviously a bit more there outside of that quite inflammatory pull-quote, with a piece in NYMag describing Obama’s speech as a more measured, even somewhat progressive-ish affair:

And while he dismissed the debate between persuading voters and energizing base Democrats as “a false division,” he explained that he’d been thinking about how the candidates have been talking about him on the trail. “I think it is important for candidates to push past what I was able to achieve as president. I wouldn’t run the same campaign today, in this environment, as I ran in 2008, in part because we made enough progress since 2008, of which I am very proud, that it moved what’s possible. So I don’t want people to just revert to what’s safe, I want them to push out and try more, alright? So we got the Affordable Care Act. It was a really good starter home, as I say,” he said. “I don’t want people just standing pat, because we still have millions of people who are uninsured.”

“I don’t take it as a criticism when people say, ‘Hey, that’s great Obama did what he did, and now we want to do more.’ I hope so. That’s the whole point,” he said. “I think it is very important to all the candidates who are running, at every level, to pay some attention to where voters actually are, and how they think about their lives. And I don’t think we should be deluded into thinking that the resistance to certain approaches to things is simply because voters haven’t heard a bold enough proposal, and as soon as they hear a bold enough proposal that’s going to activate them. Because you know what? It turns out people are cautious, because they don’t have a margin for error.”

Look, I know that broadly speaking I’m somewhat on the left-ish side of the political spectrum here. And I understand that in the fraught and oft-hopeless American political sphere Obama could be seen—especially now in the Trump age—as at the very least the best of a bad bunch, and often even more so: As a genuinely decent politician, with charm and urbane progressivism to spare. But I speak here as an external observer, as a voice outside of the States and an international leftist, when I say that more often than not, Barack Obama was considered no friend of the global left.

Obama’s speech is emblematic of what many on the global left actually saw—and continue to see—him as: A representative of a vacuous, West Wing-style liberalism, all charm and rousing speeches, with no real interest in challenging a status quo that has brought the world to the brink. An articulate and handsome avatar of a ‘Third Way’ politics that calls itself ‘centrism but which never dares question the neoliberal orthodoxy of the market or of the moral right of the American empire.

Not to put too fine a point on it, but the kind of bulls**t triangulation present in not just Obama’s speech but also in his presidency is the same one that ‘centrists’ the world over deploy constantly, and it’s a tactic that betrays their rightist ideological leanings, class loyalty, and a fear of genuine change. It is one of the tools deployed by a political elite at best completely out of touch with the needs of the vast majority and at worst actively complicit in the devastation of that majority.

Western neoliberalism has shown itself to be a complete sham, only serving the wealthiest few while hollowing out societies into dog-eat-dog wastelands. It has brought with it a capitalist climate crisis that threatens to eradicate vast swathes of our species. On top of all that there is a rising fascist international preying in response on people’s anger against the status quo and the mess it has gotten us into. The last thing that is needed now is faux-progressive politicians dampening the enthusiasm of genuine leftist movements, counseling people that are dying due to lack of healthcare or that are fleeing their homes due to wildfires that they should be ‘patient’.

The anger at the discrepancy between what we are told is politically acceptable and possible, and what is quite clearly politically and existentially necessary, was all over Twitter this weekend, as Obama’s comments became a lightning rod for this anger:

y’all when Obama left office: “I can’t wait for Barry to show his true, *radical* colors now that he’s not in office anymore”

Obama thinks "certain left-leaning twitter feeds" are "too far left" just because we want everyone to have healthcare, housing, food, and to rise up in a global proletarian revolution to wash away the oppression of the bourgeoisie and end class struggle once and for all, smh.

Obama had no problem when Citibank chose his cabinet for him.

Or when he kept a secret kill list justifying extrajudicial killings vi drones.

Or when he called the Black youth of Baltimore during the April 2015 uprising "thugs."

Or when he claimed that Flint's water is clean. https://t.co/y8VKHPDTcv

"Too far left" just means actual positive changes that scares the fuck out of the elites. We welcome this change with open hearts and open minds. We really do need to correct the ills of the neoliberal order. Enough of the elites keeping everything for themselves, including Obama https://t.co/edJ5E6mKae

Obama telling us to not venture #TooFarLeft has pushed me even farther to the left. #ThanksObama pic.twitter.com/RduAfwPsen

As a result of Obama’s speech, the hashtag #TooFarLeft also became a massive trend on Twitter.

The hashtag I launched this morning, #TooFarLeft, is #1 in America and #3 worldwide.

The idea is to destroy the ludicrous mainstream talking point that wanting social, economic, racial, and environmental justice is a radical position. https://t.co/7W8P35QF7T

Yes, I started the #TooFarLeft hashtag partly in response to #Obama's comments. But that wasn't the main reason.

Too Far Left™ is the default attack line by the entire political/media establishment to dismiss progressives and leftists who want a better world.

Proving it is THE challenge of 2020 and beyond.

Read this quote from a new CBS article and see how Dem voters have been programmed to believe the #TooFarLeft narrative.

It pains me. And I vow to fight it. pic.twitter.com/DJf62cbbU8

Musings after last night's conversations. I am #TooFarLeft because I believe:
➡️ Monroe Doctrine + Doctrine of Discovery = Oppression
➡️ Homelessness can be eliminated
➡️ Climate change is real
➡️ The world can be a better place if we try

I’m #TooFarLeft because I believe in real working wages, equity for all, open borders, a state which provides proper, accessible housing, healthcare, and education for all, plus a fully unionised workforce & an intersectional feminism determined to achieve all this

The idea that any aspect of American politics is "#TooFarLeft" with a Democratic Party that has been moving to the right for 40 years and whose major philosophical difference with the GOP is "the same stuff, but nicer" is too stupid to take remotely seriously.

I'm not sure what #TooFarLeft is. Making sure individuals don't go broke from health care costs? Making sure that every kid has a shot at a good education? Making sure that banks don't throw away our money, or that oil companies don't wipe us off the face of the Earth?

There is no such thing as being #TooFarLeft. It is what got us the New Deal, social safety nets, weekends, a minimum wage. It will get us universal single-payer M4A, CJR, peace, and a Green New Deal.

Obama, you know what NOT being #TooFarLeft got us? A fracking boom. Drone warfare. An insurance industry written healthcare bill. Crackdown on whistleblowers. A continued war on drugs, mass incarceration and more inequality. So please, go back to writing your memoirs.

If #TooFarLeft means ending the greed of the fossil fuel industry, ensuring everyone can go to the doctor without going bankrupt, ending the racist war on drugs, dismantling the carceral state, and fighting for all working people, then I am officially #TooFarLeft.

I like my politics grounded in reality. That's why I'm #toofarleft.

If being #TooFarLeft means believing:
✅ Healthcare is a human right
✅ Future generations should live on a healthy planet
✅ All student debt should be cancelled
✅ The minimum wage should be $15
✅ Lives depend on gun reform
✅ Families don’t belong in cages

← Who Is Nebuchadnezzar? Kanye West Announces His First Opera | 'Last Week Tonight: The Power of a Simple, Petty Act to Piss Off Donald Trump →