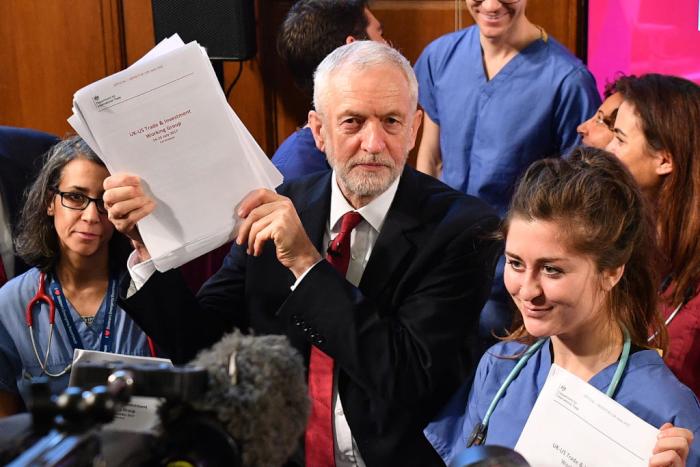 Ahead of Britain’s General Election on December 12th, a massive event on the campaign took place earlier today as Jeremy Corbyn hosted a surprise press conference revealing a 451-page secret dossier which details how the Conservative government under Boris Johnson are—and have been—involved in talks with America’s Trump administration about how to organise a potential trade deal between the two countries in the event of Britain’s exit from the European Union, and how—crucially—the country’s public healthcare provider, the National Health Service (NHS), would be on the table in any negotiations. This follows an exchange between Corbyn and Johnson at the first leaders’ debate in which Corbyn produced a shorter, heavily redacted version of the dossier and accused Johnson of conspiring to sell off the NHS, to which Johnson responded with vigorous, aggressive denial, claiming that under the Tories the NHS would never be part of any negotiations—a denial now revealed to be a barefaced, typically Johnson-ian lie.

None of this will be news to anyone who has been following the accelerated privatisation of the NHS since 2012 when the Tory-Lib Dem coalition government passed the Health And Social Care Act that abolished the duty care of the government to provide healthcare for the population and opened up even more areas of the NHS for private providers to pillage. As I have written before:

So while many have wanted to privatise NHS, few have felt bold enough to do so. Thatcher herself balked at the idea, even as she eviscerated the state and reshaped the country in the image of private enterprise. Tony Blair’s New Labour—a party once called Thatcher’s ‘greatest achievement’ by the Iron Lady herself—would implement a disastrous set of reforms called Private Finance Initiatives (PFIs) that would introduce market mechanisms into areas of the NHS, among many other places. Thus would the rot of private enterprise slither into the NHS.

Then, in 2012, an emboldened Tory party passed the Health and Social Care Act, effectively signing the death warrant of the NHS as we knew it. Despite pledging ‘no more top-down reorganisations of the NHS’ in their manifesto, the Tory Health and Social Care Act would prove to be one of the most sweeping bits of legislation ever to impact the NHS, opening all areas of it up to private providers and mandating expensive and lengthy contract tendering procedures. The Act has been an unmitigated catastrophe for the NHS, which—alongside the brutal and unrelenting budget cuts designed to make privatisation more palatable by worsening services—has brought it to its knees.

Nevertheless, despite the Tories’ aims for the NHS being taken as read by people privy to these details, the majority of the population remain relatively in the dark about these plans—by design, of course, as the mainstream media has studiously avoided sounding the alarm for as long as it could, despite mounting piles of evidence. Thus, Corbyn’s explosive press conference does now stand as near enough the single biggest bombshell dropped this election cycle, with huge potential to influence vast swathes of voters. The NHS is by far the most treasured institution in the country and something that the public is united on more than anything else—as the responses to Trump’s previous attacks on it showed. In practical terms the revelation is truly ground shaking, and could be a huge blow against Johnson’s election campaign. It’s perhaps no surprise then to see that Britain’s heavily right-wing media has responded with denial, obfuscation, minimisation, and distraction. In the face of such capitalist wagon circling it is again heartening to see some sanity on Twitter:

Jeremy Corbyn has revealed evidence of US-UK talks that he claims prove the Conservatives plan to open up the NHS to US pharmaceutical vultures and private healthcare corporations. pic.twitter.com/rcXRipg648

These now-public documents show the extent of the current government's plans for corporate involvement in the NHS. I hand them to the UK media with the hope that their true implications are understood. THREAD pic.twitter.com/0pAHiV2DEv

Now we know they really wasn’t telling you the truth, again. #NotForSale pic.twitter.com/dvAS0ss1cd

had a quick scan through the released documents. seems a clear desire by the US to restrict NHS access to cheap generic drugs & replace them with expensive branded drugs. anything other than an outright rejection of this proposal would be shameful

This is where we are now pic.twitter.com/Oue0bzCgsc

Holy shit. Not only did our political correspondents fail to report the unredacted trade talk documents, they were actually sent to them more than a month ago. https://t.co/Aj8mrMo4cz

I understand that ragging on Laura Kuenssberg for her obvious bias and staggering ineptitude is like shooting fish in a barrel these days, but this whole thread is nothing but a series of spectacular self-owns. https://t.co/ceTmI3AdOF

yeah you and the rest of the Conservative party have had almost a month to prepare your attack lines, and yet

If only we had a group of people who reported these kind of things, we could call them, I don't know, reporters?
:)

These are government documents which they redacted. Not "Labour's secret documents". What has happened to the BBC?

“Well ACTUALLY documents showing high level talks between the UK and US on the NHS, drug prices and food standards have been floating around FOR AGES…”

Well you should gave fucking reported them then.

Two reasons we know the NHS is for sale.
First it is already - £billion contracts are being awarded to private corporations rather than NHS bodies.
Second, US health corporations need to grow every year. They cannot grow any more in the USA, so naturally they will come here

political editor of the telegraph can't remember who the foreign secretary was https://t.co/zQNQKY1RnS

Obviously the documents showing a post-Brexit US-UK trade deal would be grossly unfavorable to the UK are significant to UK politics, but for a US audience: note how captured our own officials are by the Pharma interest in gutting the UK. This isn’t “good for us” by any stretch.

It's OK, you're not mad. Trump IS on record saying the NHS is on the table for a FTA. Some heavy hitters of broadcast media ARE playing down the trade discussion notes. You ARE being gaslighted.

In the past year, I've had treatment costing £30,000+ for #ProstateCancer, all paid for by our #NHS ♥️. My lifetime figure must be several £100,000s. I would be un-insurable in the US system. 1 in 8 men will get Prostate Cancer. It could be you. @ToryFibs @Rachael_Swindon https://t.co/VtOaLc4Q1I

Mark my words, our cherished NHS will not survive another Tory Govt, especially one stuffed with hard right, free market ideologues like this one. They told us we were lying when we said that the NHS was on the table. Now we have evidence that it is: https://t.co/r06UaGsoo0 pic.twitter.com/sIo0gUvNwi

The NHS documents are a game-changer. How do we know? By the panicky reactions from official media sources - print and broadcast - as they try to downplay them. They know.

Selling Off the NHS: the "Great Prize" | The economic and ideological alliance between the Hard Brexiters and US commercial interests is out in the open - the world’s largest unified & universal healthcare is the ultimate prize of the Brexit/Trump axis. https://t.co/4R5Qojx3BB

Of course they want to sell our NHS.

• They don’t exist
• Oh they do exist but don’t worry
• You not getting them
• Ok, here they are redacted
• Oops, papers leaked
• Ahh but they only mention NHS 4 times
• Ahh but only 2 Tory Ministers involved
• Ahh but erm

we're just going to memoryhole this then https://t.co/qvH3xSgl4Q

Brexit or no, this has always been the Tories’ endgame for the NHS. The fact that the public is only now fully waking up to it is a testament to the woeful state of the British media. Their reaction this latest news reinforces their status as not just not fit for purpose, but as agents actively working overdrive to damage the social fabric of the country and the lives of the vast majority of the people living in it.


← TikTok Is Harmless, Except That It's Not | 'Frozen 2' Star Evan Rachel Wood Thinks Mulan Has 'Bi-Energy' and It's Exhausting →