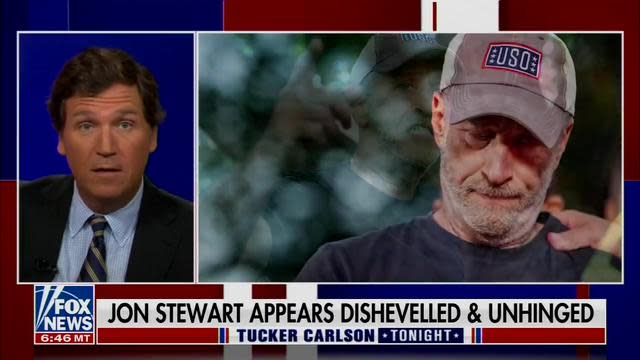 Tucker Carlson Took a Shot at Jon Stewart. It Backfired

I listened to Jon Stewart’s podcast this morning, where he and his writers talked about getting the PACT Act through the Senate. I think this is probably the most germane part:

Jon talks about what it finally took for him and the veterans groups to get the #PACTAct over the finish line in the Senate. https://t.co/Yi4xd17G2n pic.twitter.com/jmw0UGjNdU

Good for Jon Stewart, and screw all the Republicans who played games with this bill for political gain. Stewart said on the podcast that he knew of two veterans who took their own lives after Pat Toomey’s little stunt killed the bill for a few days (he also said it was clear that Republicans in the Senate were pissed at Toomey when they realized the rain of hell they incurred by going along with this stunt).

Stewart also did briefly mention the Jack Posobiec thing, and what it sounded like is that he lost his temper, he went completely off on Posobiec (as you can see), and the reason why Stewart was making amends or whatever with Posobiec in the video some of you saw is because he was terrified that, by losing his cool with Posobiec, he’d shift the attention from the PACT Act to his own actions and derail the whole thing for calling Posobiec a “f**king troll.” He swallowed his pride and ate some sh*t for the good of the PACT Act.

But we are here to talk about another troll: Tucker Carlson. Carlson, recall, lost his job as the host of CNN’s Crossfire nearly 20 years ago when Jon Stewart came on and called Carlson out so relentlessly that CNN basically had to cancel the show. Carlson clearly has held a grudge, and so when Stewart helped to pass the PACT Act, which itself was not something Carlson could effectively take direct aim at, Carlson went after Stewart’s … height.

Tucker complains that Jon Stewart is too short to date pic.twitter.com/BTQdks0IaH

Listen, Tucker “Man of the People” Carlson: The reason why he looked homeless and disheveled is that he basically lived in a field with a bunch of veterans for a week. And “too short to date?” What!? What does that have to do with anything? I’ll let Stewart handle that with a throwback insult:

Friends. Tonite I am sad. @TuckerCarlson believes me too short to date…and yet somehow, miraculously, I remain tall enough to not know what Victor Orban’s ass tastes like! Is it goulash Tucky? Seems like it would be goulash.

Oh, and in case you’ve forgotten: Viktor Orbán is the authoritarian leader of Hungary with whom Carlson is so obsessed.