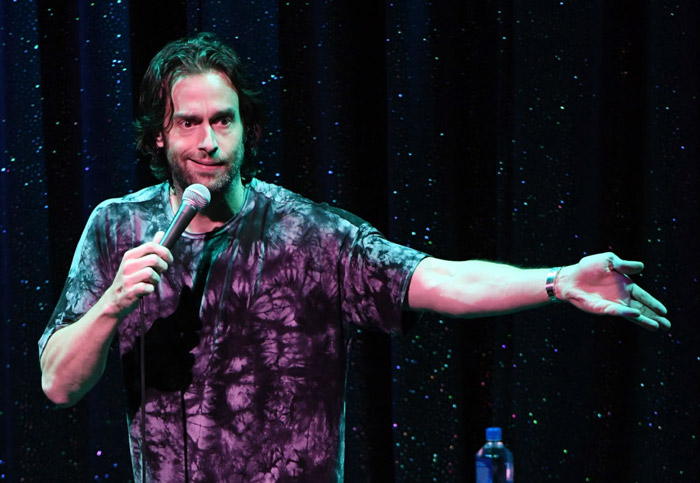 Last week, a flood of women came forward to share stories alleging that comedian Chris D’Elia was a sexual predator who has a history of grooming young female fans—some of whom were minors—for sexual scenarios. D’Elia eventually apologized, while simultaneously—and confusingly—insisting he was innocent. So, Twitter users got to work, searching his material and that of his fellow comedians for further evidence.

In one video, D’Elia laughs off allegations that he’s a pedophile, insisting they arose because he made fun of the pizzagate conspiracy theory.

In another, D’Elia is on a show discussing a teacher who was caught sending a teenage student lewd messages. He asks how she was caught and is shocked to learn Snapchats aren’t guaranteed to disappear; the pics and vids can be saved to the user’s phone.

D’Elia got ornery when asked about what he does on the road.

and all stories about the road are off limits! Lolhttps://t.co/XQUnxbnkCy

Here’s a clip where D’Elia pulls a well actually, noting that 15 is “a teenager not a kid, by the way.”

I do not know how to give this clip context beyond Chris D’Elia is a creep.

I’m a Chris D’elia fan… but some jokes write themselves #chrisDelia pic.twitter.com/Dldw3EooQH

D’Elia’s vids aren’t the only ones resurfacing. Bryan Callen and Brendan Schaub, stand-ups and co-hosts The Fighter and the Kid podcast, are known friends of D’Elia. When the allegations first came out, Callen said he knew D’Elia as a “ladies man” but had never “seen or heard of him doing anything illegal.” Callen expressed shock and hopes that “it’s not true.” So basically, Callen’s hope was that dozens of women overnight decided to get together and photoshop up a bunch of years-old DMs and text messages to tank a comedian who is at best C-level famous. While Callen claimed ignorance, Schaub cried and said, “I’m just sad.”

Comedian Chelsea Peretti quote-tweeted the video below, asking, “Has anyone cut this together with the recent footage of Schaub saying he is shocked and crying?”

1 year ago. Repeat after me:

She later deleted her tweet, but not before fans replied with this supercut of seeming comedian complicity.

This one got deleted. Here’s a different link https://t.co/fcwIzIlbxx

Meanwhile, Callen’s being accused of cleansing his social media of any D’Elia-related content.

Hey @bryancallen
Is it true that you removed all images of us on Instagram? You piece of shit. By the way, how old is your daughter? #chrisdelia #TFATK #BrendanSchaub

After D’Elia’s Whitney co-star and noted friend, Whitney Cummings, spoke about the allegations, video has surfaced of her recounting a time Callen pulled a Louis C.K. on her.

Despite tearful vids and Instagram notes, Twitter users are raising questions about who knew what D’Elia was doing.

After seeing Whitney’s post, this deeply disturbs me. This is not the first message I have received telling me that these people were aware and involved. #chrisdelia #whitneycummings #markhayes #michaellenoci #bryancallen pic.twitter.com/65YrrKwJl3

Deric, former employee for Brendan Schaub, basically replies that they all knew. Because they all knew, of course they did. All they do is talk and share stories, especially behind each others backs.#chrisdeliaisoverparty #chrisdelia #WhitneyCummings #DrainTheSwamp pic.twitter.com/IIKRQtP9aV

← The Lincoln Project Compares Trump's Tulsa Rally to His Penis | Why Is Henry Winkler Trending On Twitter? Because He Dunked On Trump →