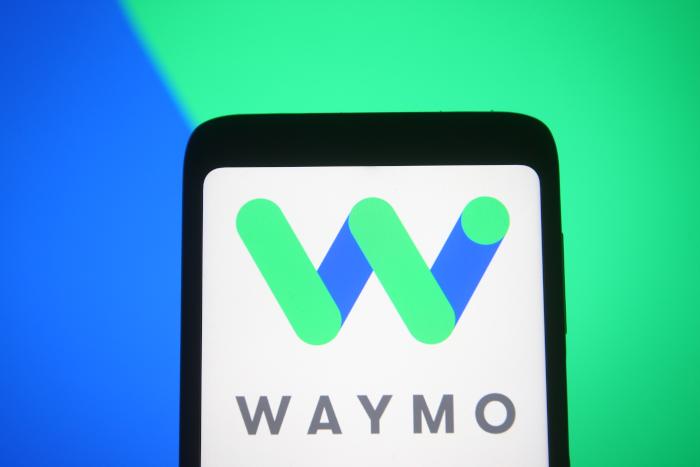 There's Upper-Tier YouTube Creator Drama and I'm Here For It (Also, It's About Very Serious and Nuanced Issues)

When I talk about “Upper-Tier” YouTube creators, I’m not referring to the current most followed YouTubers, nor about a particularly salacious scandal. This is not about the Paul brothers doing something awful or stupid or PewDiePie doing something Nazi or any of the other ways massively popular YouTube creators stir up drama, they are too fungible to be Upper-Tier, blue-chip YouTube.

With Upper-Tier, I’m referring to all the (mostly independent) creators producing high-quality content, generally educational and essays. Very much like the ones I’m trying to shout out/make fetch happen as “too good for YouTube”, except they are either much more consolidated and/or have a much bigger audience, with a subscriber counts in the hundreds of thousands if not millions. Think Contrapoints, Kurzgesagt, Vox, PBS Digital Studios, Johnny Harris, the Green Brothers outlets, The Armchair Historian or Veritasium. The latter one being in the eye of this drama.

With Veritasium closing in on 11 million subscribers as of writing this, Derek Muller has followed and expanded on the tradition of the great science communicators before him, as he has managed to make videos about ever more complex STEM topics in compelling and entertaining ways because he realized how to navigate the format. Sometimes he will use elaborate animations and set pieces, other times, it’s just him walking and talking with a selfie stick around Chernobyl. But for all the ways his channel makes YouTube… worthy, he made a questionable decision a few months ago.

The notion of someone or something being a “net positive” in the world deserves an honest examination of its own, but it’s undeniable all these creators have made YouTube a salvageable space, though I’m not sure they are enough to counteract the pits of misinformation, fascist propaganda and/or those guys who have made a career out of whining about Star Wars going woke and Brie Larson offending their masturbatory fantasies by having opinions. Nevertheless, there might several thousand kids stranded in the Bible Belt who clicked on a Veritasium video about a lake covered in black balls and went up whatever the opposite of a rabbit hole is, helping them discover a much more interesting and wider world than guns, grits, and gospel.

However, this educational spirit, at the heart of all Upper-Tier YouTube creators, doesn’t prevent them from becoming compromised by less altruistic interests. Producing high quality content is expensive after all, and YouTube’s monetization policies and algorithm bullshit don’t make it easy for people who want to do something other than boxing, unboxing or terrorizing their neighbors through pranks.

And of course, educational channels, in particular those focused on STEM, will always have an eye for future things, but that eye can just as soon plunge itself into a tunnel vision.

Enter Tom Nicholas, a remarkable and highly entertaining video essayist on cultural, philosophical, political, and media issues, active since 2017, accumulating over 250,000 subscribers and reliable viewing figures. In his most recent video, he boldly punched up and took Veritasium to task, after Muller and other YouTube educators made a series of integrated propaganda videos for Google’s Autonomous Vehicle start-up, Waymo.

When you have the time, I’d recommend you watch the entire video, but to recap, Nicholas deconstructs not just the flawed and unscientific arguments used by Veritasium to support Waymo (cherry-picking and bad source galore!), but the entire commercial environment which led to their production and how they deliberately blurred the lines between what it should’ve been (an honest and informative piece about how AV work, their pros and cons, their implications) and what it actually was, shilling for Google fancy new set of toys. The problem is not with promoting stuff, all Upper-Tier have to do integrated promotions, ironically, because of YouTube’s arbitrary monetization policies and algorithmic instability. That’s also the case with Nicholas video itself. The difference is that they usually promote things like VPNs, streaming sites, Audible, coupon aggregators, pocket wallets; as harmless products as you can get. Meanwhile, what Veritasium and other channels did was propaganda for unproven, underdeveloped technology that will have massive policy implications. And they didn’t bother to explore those nuances, like the literal trolley problems AVs will face.

In all fairness, I’m being facetious when I say this is DRAMA, I’m just stirring what’s actually a candid and nuanced debate because I am a Messy Bitch Who Lives for It… Except Veritasium decided to respond in the worst way possible, trying to defend the indefensible (as of writing this piece, the following text is pinned in the comments of Nicholas’ video): 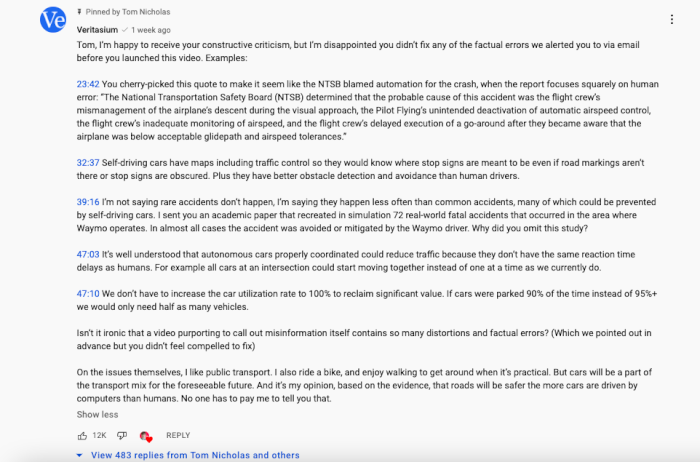 This is standard fare counterarguments, Nicholas came prepared, and pointed out his (and our) disappointment: 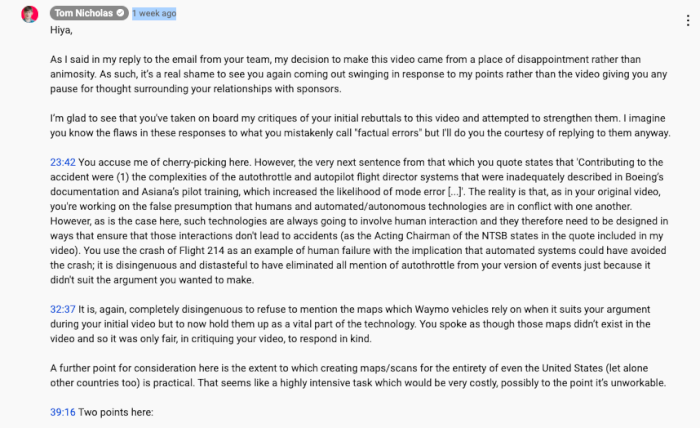 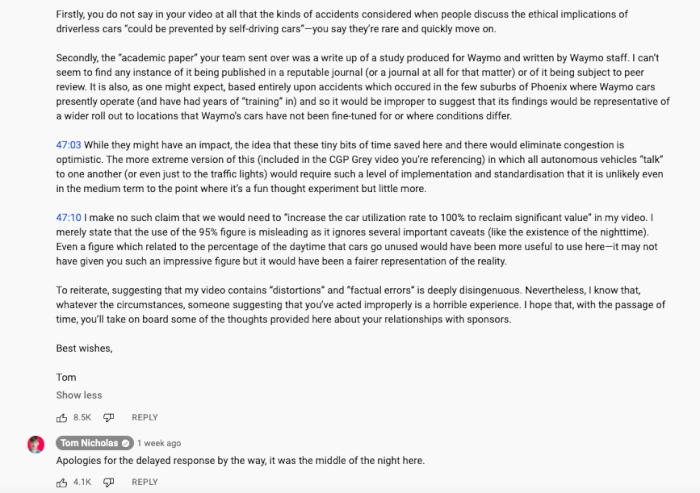 There is an interesting quagmire whenever two highly prepared people have a fundamental disagreement, a sort of “they said/they said” nullification, regardless of whether this debate started from ethical considerations. But of course, you’re not here for that academic shit, you are here for THE DRAAMAAAA. And you can’t have Drama without hype-men side-quests:

You claim that Derek pushes misinformation for money without knowing him, refuting his main point about the statistics of self-driving safety, or realizing that his opinion could possibly line up with a company’s. Your lovely voice doesn’t make up for this lost hour of my life

Your counter points re: self driving safety were polls saying that people were scared and a few instances of crashes without the context that they are exceedingly rare. *This was exactly why Derek made the video in the first place*

What a bizarre response to the video. I reference a single poll maybe 5 minutes into the video max? And it’s framed as nothing more than cultural context for the Waymo’s decision to sponsor a bunch of videos.

But other Upper-Tier YouTubers responded very positively to Tom Nicholas, after all, Veritasium’s decision is a cautionary tale about letting corporative interests (or Bill Gate’s schtick) influence your mission: 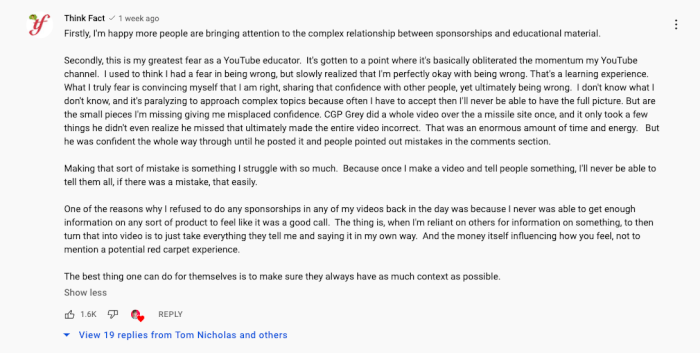 YouTube’s rapid turnover implies that no creator can rest on their laurels, there will be others challenging you in some way or another. And for Upper-Tier YouTubers, that’s a good thing, that’s a great thing, it actually fosters debate and conversations that I don’t think could happen in traditional media. After all, we’re still processing all the problematic stuff from the early 00s in TV and Film.

If I could give Veritasium (whose videos I will still watch) is that I understand the gleeful fascination these science communicators have at truly futuristic inventions coming to life. No more than 15 years ago, experimental autonomous vehicles were Rude-Goldberg contraptions that could barely get around a corner. Also, considering that Waymo uses hybrid cars and will eventually shift to full-electric, it comes across the harmless kind of corporate integration. Just like with all the videos the Bill & Melinda Foundation have supported, at least they are on the side of the future and working against the Climate Crisis. In a YouTube that is still plagued by oil shills like PragerU and Ben Shapiro, what’s the harm in promoting this a technology that might actually help?

But EVs, as with every shiny new obsession Silicon Valley takes on, are a simplistic solution to complex problems… that have already been solved. As Tom Nicholas concludes at the end of the video: What about Public Transportation? Where autonomous or semi-autonomous vehicles have been around since at least the 70s?

You know what’s easier and cheaper than strapping LIDARS, Sonars, and cameras all over a Prius? A trolleybus system. Or tramways. Waymo launched in the easiest place for AV to roll around: The desertic, new and flat city of Phoenix. They want to give it a try in San Francisco now because why level up when you can buy your way to win?

Except trams and trolleys figured out how to move in cities built on hills centuries ago.

Which should put the ball on the side of public transport industrialists. Come on guys, what the hell are you hesitating about? How about dropping some of that integration money for your own good cause and let’s make cars something only for the weekend?

When it comes to integrated content, Big Tech has an organic foothold, but that shouldn’t dissuade the manufacturers of rolling stock and rail infrastructure from reaching the kids. You know what’s more fun than riding on an Uber with your friends? Hanging with your friends inside the

I’m serious, if you’re reading this Siemens Mobile or Bombardier Transportation or Alstom or Kawasaki Heavy Industries Rolling Stock Company, hit me up! I’m willing to shill for you, and do you have any idea how cheap I am? I think the Overlords would gladly sign on to this.


← Some Brief Thoughts on This 'Woke' Season of 'Survivor' | Review: 'Army of Thieves' Flails Despite the Efforts of Matthias Schweighöfer and Nathalie Emmanuel →