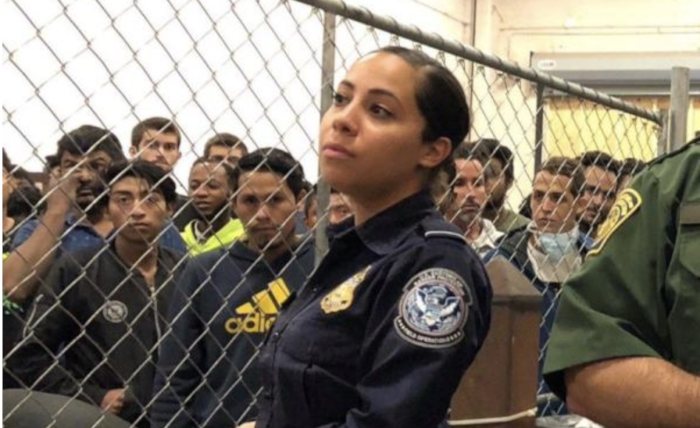 The Thirst For ICEBae Is Real. So Predictably Real

If the answers to any of those questions are, “What is the goddamn point of these questions you’re asking us?” here is your answer.

By now, unless you’ve been spending all of your days watching Meghan McCain spew all kinds of infuriating sh*t on The View every morning and then spending your nights writing erotic fanfic about how you’d screw all of the gay out of that incredibly talented and charismatic soccer player who just won the World Cup and has never been shy when expressing her demands for equal pay and how she can’t stand the 45th President arrogant loudmouth Megan Rapinoe, you’re fully aware of the detention centers/concentration camps/unspeakable hellholes where at least 600,000 migrants are being held in captivity and also where all hope is practically abandoned. You’re aware of the over 600,000 people being held there in captivity and in conditions that would make most people flip every table in sight and bawl in their pillow for hours if these conditions involved animals and if footage of animals in these conditions appeared on their television screens set to the music of “Angel” by Sarah McLachlan, but because these conditions involve thousands of brown people who speak Spanish, they instead find themselves humming the chorus of “Cell Block Tango” from Chicago. You’ve read about politicians such as Alexandria Ocasio-Cortez who have gone to visit these places, to see these conditions for themselves, and to witness the callous and vicious behavior shown towards these prisoners by the Border Patrol agents who have been assigned to stand guard over them, and whose behavior usually comes in the form of laughter and mockery and just utter cruelty.

But if you think that everyone despises these Border Patrol agents for who they are and what they choose to do with little to no reluctance or hesitation, guess again. Because earlier this week, one of those Border Patrol agents caught the attention of several men on Twitter who couldn’t help but find her attractive. So much so that they’re willing to ignore what she does for a living just like how she ignores the pleas of the men, women, and children torn away from their jobs, homes, and families who want nothing more than to be released and go back to living their lives. So attractive that they even gave this Border Patrol agent, whose real name is Kiara Cervantes, the oh-so-adorable nickname “IceBae.”

Holy shit! #IceBae is real and she fine AF! WTF?!

I think I'm coming down with a case of undocumentation! 😍 https://t.co/wLL2L9s2Xz

she can detain me for as long as she wants 😍 #IceBae pic.twitter.com/py9NAPZUDU

Hey @kiarace24, no disrespect intended, ma’am, but if I cross your Southern border, will you take me to your detention center? #icebae pic.twitter.com/u03EvpYSFn

Fuck it, #IceBae is hot. You all calling her a Nazi and shit. You just jealous, hating ass muffukkaz! Whose mad? #HoesMad pic.twitter.com/YbnsvmcNgE

Of course, with Twitter being Twitter, it didn’t take very long for Kiara to take notice of all the attention and Twitter follows she was getting from her many male admirers, to enjoy all of the attention that she’s currently getting, and for her to respond to said admirers about how proud she is of her work..

Soooo it’s crazy…. but here I am. I’m hearing something about a viral picture. I would like to say i was just doing my job.. providing security for the visit of @VP
. It was an honor and I take a lot of pride in my job!

WOW I am in awe. Thank you all for the support! My job is so hectic at this moment but I am grateful. I love protecting my country! 🇺🇸🇺🇸❤️ And I love my supporters!

Thank you so much for the kind words @foxandfriends https://t.co/Rgorz4t6Mz

It also didn’t take long for men to get defensive about their attraction towards Kiara and to call women out on social media for their supposed hypocrisy.

So this guy can trend, but #IceBae can’t. Just because you aren’t attracted her doesn’t mean you should bash her and blame black men. It’s enough now pic.twitter.com/1mSaIlvklh

He went to prison for stealing a car, not operating a concentration camp. https://t.co/nL3AAiby7J

And for both men and women on Twitter to express their utter contempt towards Kiara as well.

This is like knowing birds who eat chicken exist https://t.co/AhIt76qXXu

Y'all will hype up any & everything lightskinned 🤦🏾‍♀️. If she would lock up her own wtf you think she would do to y'all niggas? The trap house would be raided with with a quickness. #IceBae pic.twitter.com/MzH5SExZfD

Brown & Black dudes are literally calling an Immigration Enforcement Agent.. #ICEBAE …as if their people aren’t the targets of these raids. 🤦🏾‍♂️

If I were a guard at a concentration camp that was imprisoning people, especially people who look like me, I would probably skip making a video https://t.co/ArC81m6F0H

fuck you and your 5 button acid wash jeans you big goofy bitch https://t.co/4K8YSy0erP

niggas done gave a concentration camp guard 53k followers cause she barely thick. i hate you niggas more and more every day

#IceBae is such a cute name for someone who puts black and brown children in cages.

We really will have to leave some of you behind.

So if you’re a woman out there who is single and looking for someone to be with and whose company you truly enjoy, and you’re wondering what more you can possibly do to gain the attention and affection of a man who will give you exactly what you’re looking for instead of gaining the attention of a man whose idea of being affectionate is slapping you in the face with his penis without permission during sex, don’t bother signing up for dating apps. Sign up for the United States Border Patrol instead, and do your part in making sure that children are not just taken away from their parents to possibly never see them again or even recognize them if and when they do see them again, but also see to it that you use these children to re-enact Sophie’s Choice. Do that, and you’ll have all kinds of f**kboys sliding into your mentions in no time.

And if that doesn’t work, you can always go to a bagel shop in Long Island and strike up a conversation with one of the men in line next to you, and hope that he’s actually a racist and misogynist with severe anger issues.

← What the Hell is Going on in Puerto Rico? | Who Are the Cats in the 'Cats' Movie and Which Ones Look the Weirdest? →