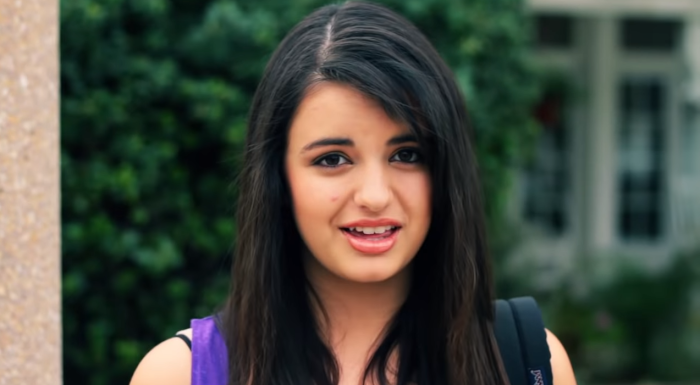 Remember ‘Friday’? Way back in the mists of time in 2010, when America’s ‘war’ on Afghanistan had only been going on for a decade, a young teenage girl called Rebecca Black was catapulted from obscurity into the harsh grinding gears of the internet’s meme maelstrom. This was 2011, so the algorithm was very much already in place by then: The internet took a thing, turned it into an image macro template, and churned out a billion versions of it until it got bored and moved on to the next thing. The crying, white ‘first world problems’ lady, the ‘business cat’ with a tie, Chuck Testa—into this febrile landscape rode Rebecca Black in her convertible like an unstoppable war machine of meme materiel. Here, as if you needed it, is a reminder of her day-glo paean to the euphoric yet empty release that the end of the working week provides, even for a person who has yet to officially enter the drudgery of the capitalist assembly line:

An earnest teenage girl in a music video replete with autotuned lyrics and awkward dance moves. Naturally, the internet tore it to shreds. I often think about how immensely grateful I am that social media wasn’t a thing when I was growing up. That my generation just slipped past it, and my painfully ridiculous adolescence was never logged and stored for eternity, and was instead allowed instead to disappear forever into the obscurity in which it belongs. For countless generations before us, that’s exactly what happened. As it’s meant to.

And then things stopped disappearing for good.

13-year old Rebecca Black found this out the hard way with ‘Friday’. Growing up in a society that elevates individualism and fame for fame’s sake, it’s natural that starring in a music video would be on her to-do list, and so her parents shelled out a few grand for an exploitative capitalist entity to write, produce, and direct one for Black. ARK Music Factory, now defunct, specialised in this process, ‘helping people get a foot in the door’ of the pop music industry. Patrice Wilson, co-founder of ARK Music Factory, said he ‘wrote the lyrics on a Thursday night going into a Friday. I was writing different songs all night and was like, ‘Wow, I’ve been up a long time and it’s Friday.’ And I was like, wow, it is Friday!” As per ARK Music’s Wiki:

Ark’s Facebook page claimed to be creating a community where artists from all fields can come together to build connections and interact.[4] Their website also claimed that their dedicated team had industry professionals who have worked with Miley Cyrus, the Backstreet Boys, and Ashley Tisdale.[non-primary source needed]

This would become Rebecca Black’s legacy. And she would suffer for it. Black, who became a YouTube personality after becoming famous and who now has music to promote, just tweeted some reflective and open thoughts on the bullying and harassment she went through as a result of ‘Friday’, on the song’s tenth anniversary.

She also penned a thoughtful and honest essay for NBC, about the impact ‘Friday’ had on her:

I was skipping my way through the minefield of early adolescence, experiencing the same low-grade bullying that most kids do, when I recorded a music video during a school break, just to help me gain some experience and have some fun. When “Friday” went up on the internet, it went crazy — and the onslaught of negative attention I received was so sudden and so intense that I wasn’t sure I would survive.

One minute, I was a normal girl and then, in the next, millions of people know who I was and they were ruthless in hurling the most vile words my way. People were writing things all over the internet, on social media and they were laughing at me on TV shows, and making fun of me in YouTube videos. It was open season and I was the target. The fact that there was a human, a person — a 13-year-old girl — on the other side of the screen seemingly escaped so many people’s attention.

Social platforms can really dehumanize the targets of online abuse. For instance, I once met someone who had bullied me online, and she told me to my face that she hadn’t ever considered that I was actually a real, living, breathing human being. Her actions were, she said, all about venting her own sadness and aiming it, sort of ethereally, at me.

Black goes on to talk about the specific challenges faced by young women in society:

An adolescent girl is, at best, pretty confused as to what life is all about and usually struggling to navigate this world around us as we’re beginning to be seen as adults but without the emotions or experience to handle adulthood. It is so challenging to live up to all the requirements that a hugely demanding society places on us women; to perform, to look exquisite, to be fun, to be smart, to be popular. It is just too much; we are not created to be “perfect” and it is not fair to demand so much from a young girl, let alone from any grown woman or any human.

And of the desperate need for universal empathy (and how the lyrics of one of her songs touch on that):

It is increasingly obvious to me that every single one of us is experiencing pain, and trying to deal with it in some way or another. And I know it is important for people to have the opportunity to express their hurt and anger in a constructive way. But causing yet more hurt and pain in others is not constructive: It recreates that famous “chain of pain,” and it’s that cycle which we have to stop. I refer to some of this in the lyrics of my song “The Great Divide.”

Honestly, I took the piss out of ‘Friday’ massively at the time. I think we all did. I was 22. I took the piss and then moved on without looking back. Having grown up a bit, reflected on how younger generations live a life of constant exposure, and now read Black’s essay, I feel kinda bad, even if my own piss-taking would’ve never directly affected her. Yeah she got famous off the back of ‘Friday’, but at what cost? After all—in this dog-eat-dog neoliberal dystopia we find ourselves in—fame, by itself, is a malicious agent in its own way too.

well, f**k me. I really didn’t think that when I woke up on this Tuesday that Rebecca Black’s ‘Friday’ would have me feeling all introspective. 2020, eh?