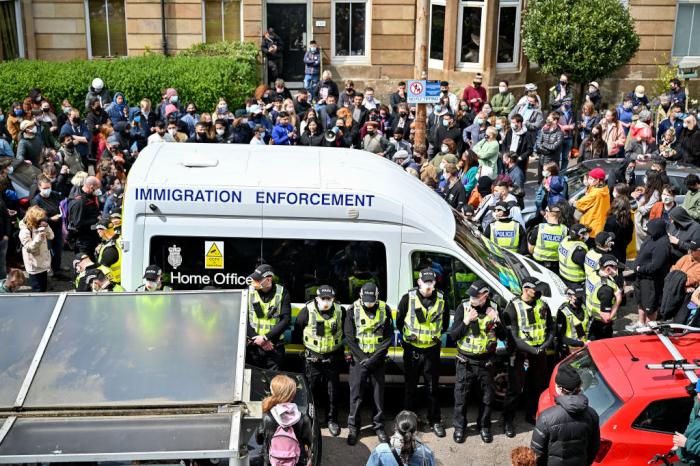 In Scotland, the Best Photo of the Year (and a Vision of a Better Society) is Born

A few years back I wrote a piece about my favourite photo of the year. The photo in question was of Alex, a lad in a wheelchair and a Slipknot t-shirt, borne aloft by the crowd at a metal festival in Spain. Sure the metal flavour of it all helped, but it was the pure solidarity pouring out of the image that made it have such an impact.

Yesterday, incredible images came flying out of Scotland that spoke not only of the power of solidarity but of an alternate view of how power could be distributed in a society. In the morning of 13th May, on Eid al-Fitr, a white van with the words Immigration Enforcement emblazoned on it in large, bold letters rolled into the Pollokshields neighbourhood of Glasgow, one of the city’s most multicultural neighbourhoods. Officials from the UK Home Office then raided a flat and forcibly removed two men of Indian origin, pressing them into the van.

Their plan to scuttle off without a fuss did not come to fruition, however. Instead of a clean getaway, they were met with a spontaneous protest as hundreds of neighbours and people from the community surrounded the van, preventing it from moving. As the day wore on, the crowd swelled, trapping the van completely and refusing to let it leave, with chants of ‘These are our neighbours, let them go!’ filling the air. One protester lodged himself underneath the van for several hours in order to prevent it from carrying the men off.

Eventually, the outnumbered Home Office officials and accompanying members of the Scottish police force had no choice but to relent, and the two men were released from the van to massive cheers from the crowd. Emerging with smiles on their faces, they were escorted to the local mosque by the jubilant protesters.

Institutionally and legally speaking, the UK has never been a particularly welcoming place for immigrants and refugees, yet things have gotten progressively worse since 2012 when the then-ruling Liberal Democrat/Conservative government and Home Secretary Theresa May introduced the so-called ‘Hostile Environment’ policy framework (their label), which enacted a policy framework designed to make it as difficult and unpleasant as possible for people without legal leave to remain to stay in the country. Housing has been made difficult, as has healthcare—with NHS staff being asked to act as de facto immigration officials by limiting healthcare based on immigration status; victims of trafficking have been mistreated; deportations have increased; people have died in immigration detention facilities—the list goes on and on.

It’s only been 7 years since “Go Home” vans were driven around the country. Theresa May, then Home Secretary, signed off on this operation. She went on to serve as Prime Minister. So, tell me again how the UK doesn’t have a racism problem. pic.twitter.com/NY6vSkKqyp

Fast forward to 2021, and the UK has only travelled further down this road, with the neoliberal capitalism championed by both the Tories and Labour (with a beautiful five-year exception to the latter) contributing to British—and especially English—society becoming a hard, cruel, fractured place. Hollowed out social services, an insecure job market, an impossible housing market, and a depleted welfare state more concerned with doling out punitive measures instead of providing support to those most in need has created an environment in which the powers-that-be find it remarkably easy to blame scapegoats for society’s troubles.

When it comes to blame, the elite and the media that serves them know exactly where to point the finger.

The bankers that crashed the economy?

The Tory party that caused 150,000 needless deaths with their handling of the coronavirus crisis and used that crisis to siphon off billions of pounds of public money by handing contracts to their dodgy mates?

With a decade of worsening conditions, racist media narratives, and the odd Brexit vote thrown in there, the Hostile Environment under current Home Secretary Priti Patel has only gotten worse. In 2019 a UN report said that the combination of austerity measures and Hostile Environment policies was responsible for futher ‘entrenching racism’ in the UK, with the cruel immigration system enacted by the latter ‘stoking xenophobic sentiment’.

This is the kind of society that the rich and powerful want to see: Atomised, bitter, and lacking all bonds of solidarity so as to be ripe for exploitation, which is why the news and photos coming out Glasgow yesterday have been such a powerful force. They are bold evidence of the fact that even after all the elite’s concerted efforts to turn us against each other, some people refuse. They are manifestations of the cry of solidarity born in Allende’s Chile, ‘The people united can never be defeated.’ All of the photos are incredibly powerful, but there’s one in particular that really stood out to me:

Photo of the year. pic.twitter.com/bJ4YpMAUKj

Think of all the countless photos we have seen just over the past year. Of protests and uprisings. Of BLM marches and Colombians fighting neoliberalism and women protesting unsafe streets and the Palestinian people refusing to be slowly eradicated. Of countless others in previous years. No matter the struggle, always there is a common theme: The police, armed and aggressive, swarming in and surrounding the people, mercilessly beating them until they disperse or are arrested. That is the structure of power we live with. The racist and violent, carceral capitalist state. That photo from Glasgow is so powerful because it so neatly and strikingly shows, in one very effective composition, how society should be structured instead. How it actually is structured: The people have the power. They serve us. We surround them. In Shelley’s words: ‘We are many, they are few.’ It just so happens that the few do a damn good job of making us forget it sometimes.

Here’s hoping that the lads who had been detained remain safe and free, and that this happens to every single one of these vans.

Every other photo and video from Glasgow was equally glorious, as Twitter showed:

“These are our neighbours. Let them go.” Pollokshields responding now to immigration enforcement raid. pic.twitter.com/uOGRO7DmUP

Anti-deportation protest on Kenmure Street in Pollokshields. Immigration van is ringed by police and protesters. “These are our neighbours. Let them go.” pic.twitter.com/0xYhXw1XxX

Lawyer Aamer Anwar addressing the crowd at Kenmure St protest. He says the only way protestors will disperse is if immigration enforcement officers release the two men being held in the van. pic.twitter.com/xqsi7dMxRO

Residents are blocking the deportation of their neighbours in Kensmure street, Glasgow chanting "Refugees are welcome here" and "They're our neighbours, let them go!"

Been sobbing over videos from Kenmure Street.
There is nothing more beautiful than a community standing together in solidarity against the racist violence of deportations.
Thank you Glasgow, from my heart ❤️❤️❤️❤️❤️❤️❤️❤️❤️❤️❤️

Immigration raids and deportations are some of the most deprived and genuinely evil functions of the state, I am so heartened to witness the community solidarity in Glasgow. We will beat the state in the streets

People in Glasgow fly the Palestinian flag as they surround a police van to protect their neighbours from deportation. Freedom for all, from state violence everywhere! https://t.co/7SO2KiDsaC

If even a small proportion were faced with incredible resistance like this, I imagine there'd be a very swift reassessment of how 'worthwhile' these raids are. https://t.co/I2VW3p066l

Really proud to say I come from Glasgow after what happened in Pollokshields , where’s my da was born and raised. Heroic people. ✊ https://t.co/oysoqXIECU

2/2 Hundreds held the Immigration Enforcement van during the day until thousands gathered in the evening. Those inside are now, for the moment, safe. When we fight - we can win. pic.twitter.com/RBoXfhuu9r

Glaswegians surrounded immigrant enforcement vehicles and one GOT UNDER THE VAN to prevent them from leaving with their immigrant neighbors. The Home Office had to tell them to call off deportation proceedings. Go Glasgow go! https://t.co/jZoHwODsEv

The people of Kenmure Street and Glasgow have shown us tonight that deportations can be resisted. This government's racist agenda can be stopped. But we need to be ready to stand up, stand tall, and stand by our neighbours.

Racism must be met with resistance. Absolute heroes.

My #EidMubarak message to @pritipatel yesterday “there is only one way this is going to end & that is with the release of these 2 men with no conditions” #PeopleMakeGlasgow❤️✊🏾#HumanRights 🏴󠁧󠁢󠁳󠁣󠁴󠁿 #RefugeesAreWelcomeHere pic.twitter.com/FAwJWZRO5e

A week ago today racist Jayda Fransen stood in this very constituency in Glasgow and voters emphatically sent her packing. Today, the Home Office tried to detain a couple of locals for deportation and the good people of Glasgow sent the Home Office packing. A pretty good week ✊ https://t.co/Ud6etN5yCr

The 2 men have asked to say thank you to the Glasgow crowd. @itvnews pic.twitter.com/3enE47dmXn

Upstairs neighbour filmed how it started this morning - growing from a wee half-dozen people to the hundreds we saw overturning the unjust, racist home office today is incredible. Pollokshields forever 💪🏻 pic.twitter.com/MBaekJbzgs

After watching #KenmureStreet reports on TV, I am surprised no report showed the scale of the protest. Here is my unedited WindaesTV report of the detainees’ release #PeopleMakeGlasgow pic.twitter.com/gCx3ZS0HBC

More photos from today, it really was one of the most inspiring things I have ever witnessed. Eid Mubarak (more @ https://t.co/4NC5d8i2y7) pic.twitter.com/eYSubK3dwH

Lakhvir Singh: “I’m so happy that my fate brought me to Glasgow where they’ll come out on to the streets to help one of their own.” pic.twitter.com/uHidcknth2


← A Spate of Break-Through Cases Illustrate the Importance of the Vaccine | Review: 'The Killing of Two Lovers' Presents A Muddled But Riveting Portrait Of Toxic Masculinity →