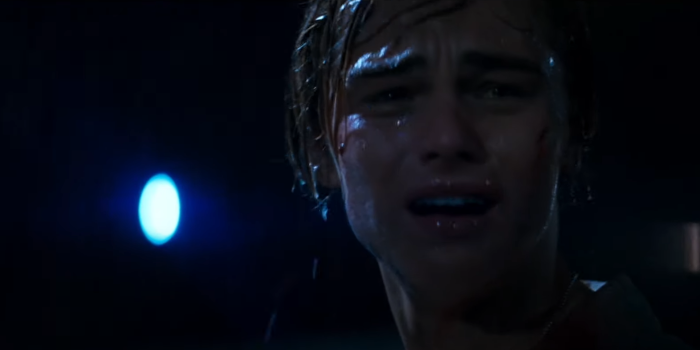 Ah, Leo, Leo, Leo, Leo. For the longest time I really thought you weren’t a very good actor. Then Once Upon a Time … in Hollywood happened, and now I do. I think you just had to mature into yourself a little bit. Like your Hollywood co-star, Brad Pitt, who clearly learned a lot about acting in his years in the business, you have improved a lot too. More importantly, you learned to relax. To be a bit less. To give that intensity cleave in your forehead a little break. Now that you’ve found that groove, I hope you don’t lose it.

That being said, Intense Leo could be fun too. Take the 1996 Baz Luhrmann Shakespeare adaptation, Romeo + Juliet, for example. A film I thought was ridiculous in the nineties, and which I still think is ridiculous, but now in a good way. That has Intense Leo in spades. And it works and it’s great fun. My old problem with him is very much in evidence—I don’t believe him in the role at all—but whatever, it’s fine in this film which plays off his public persona and adorns events in colour and fireworks and batshit spectacle that you sometimes forget to breathe, let alone critique a performance. Besides, it’s also often hard to notice there are any other performances in the film at all other than these two:

And on that note, let’s enjoy the brand new Honest Trailers video, which takes a good, poetic look at Luhrmann’s gaudy-adjacent masterpiece:

You may have noticed there was no questioning of Leo’s good looks anywhere in that video. I hold my hands up, that was just me wondering out loud (and hoping to bait a certain someone—who knows if it worked; it’s the journey that’s important, not the destination).

← How You Can Enjoy MoMA's Virtual Cinema Slate: The Future of Film Is Female, Part 3 | Review: 'The Map of Tiny Perfect Things' Brings Whimsy To Time Loop Romance, And Yet... →