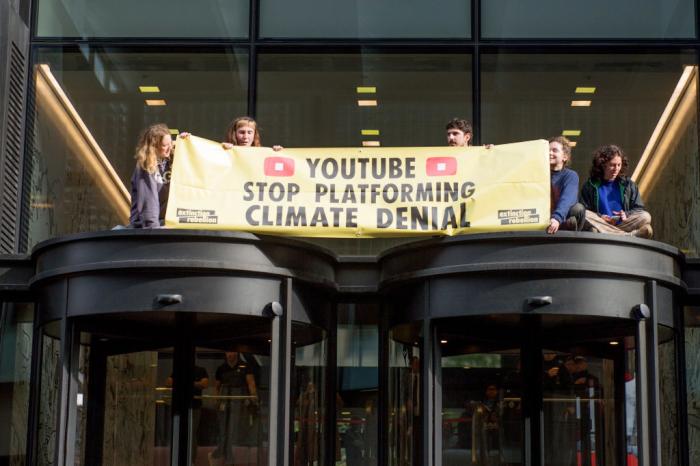 For the past few weeks London has been host to a series of protest actions by the climate activist group, Exctinction Rebellion (‘XR’), as part of a self-described ‘autumn uprising’ or ‘autumn rebellion’.

The organisation, founded to bring attention to the imminent crisis of climate breakdown and to force tangible action from political and industry groups, aims to use mass civil disobedience and a willingness of activists getting arrested as part of their goal.

The group’s goals are not just admirable, but existentially necessary. In the face of ongoing capitalist exploitation and political inertia and complicity bringing the planet’s climate systems to a state that is already wreaking terrible destruction on vulnerable communities in the global South and that will soon cascade into a series of feedback loops bringing greater and greater devastation to ever larger parts of the planet, direct action has become the only route to being addressing the issue. In the coming years, as the effects of climate change accelerate and build on each other, the bonds of the social fabric and the superstructures of the world will begin to break down, often rapidly and violently, unless we take action to try ameliorate the worst of this.

XR are however not without their flaws. Some of which are significant, and which have attracted entirely justified criticism. Much of the group’s organisational spine and command structure—such as it is—is overwhelmingly white and middle class, and this is reflected in their mission statement regarding the police, and their often tone-deaf approach to structural violence faced by marginalised communities. There is a great piece on that right here:

Really terrific & important piece from someone who has been working with #ExtinctionRebellion.
"I cannot remember the last time I was quite so angry at members of a movement whose rights I seek to help defend."https://t.co/N6r35qWD9d

What could be succinctly described as XR’s class and race problem is also reflected in their late and slow adoption of climate justice rhetoric—which seeks to centre the fact that climate change will be effectively an extension of colonialist exploitation: The nations and peoples who will bear the greatest brunt of the effects of climate collapse will be those who have historically suffered at the hands of the global North’s empires, all the while historically producing the least volume of the carbon emissions that have led to that collapse in the first place. There is a fantastic piece by Sharlene Gandhi here on the climate justice issue and XR’s less than ideal grasp of the situation. (This is not even mentioning some of the individuals involved in XR who have shown deeply troubling affinities for neo-climate-fascist language that would put the blame on overpopulation and immigration rather than capitalism and resource distribution. Those individuals might be in the minority but they do exist and they need to be sidelined immediately).

As part of XR’s autumn uprising, the group have blockaded roads, grounded airplanes, and staged various sit-ins and protests in numerous public places. The group has been subject to punitive police action as a result, including a recent and controversial blanket ban that forbade the staging of any protest under the XR banner in all of London.

This morning saw an ugly turn in the saga of the autumn uprising, with a small group of XR protesters climbing on top of a busy rush hour tube train in a working class and ethnically diverse part of London, many of whom would have been using that train to commute to precarious late stage capitalist employment with no allowances for lateness, which resulted in scenes that could be described—entirely, sincerely un-glibly—as ‘predictable’:

Shocking moment angry commuters drag two #ExtinctionRebellion protestors off the top of a train in Canning Town and attack them. pic.twitter.com/EZAMa9tT2t

I'm really sad about this. I didn't want #ExtinctionRebellion to do this, such an own goal. I hope these protesters are ok. Please don't do this again. You are alienating working class people using public transport. Focus on politicians and big finance. https://t.co/c0Wn9fdHq9

1. These are working people. Do you want them on your side or not

2. This and the conceptual dance bollocks make you seem like middle class delusionals.

3. Target those in power. Punch up not down

4. Ur tactics not ur cause is what’s wrong

There is a lot to applaud about #ExtinctionRebellion & also lots that need to improve. But disrupting public transport in East London is a tactical mistake on many levels. Many better targets of #ClimateEmergency that impact lives of people in global South https://t.co/pVAPTxrIzh

The Tube & all modes of public transport are part of the solution to climate change, not the problem.

Can we kindly suggest you stick to protesting against those who create the problem. Not our industry, members + hard working commuters.

I would have never picked Canning Town to protest. This sets up XR as a middle class vs working class issue. I wish they had been more strategic. IMO XR is not an inclusive movement, despite the fact that Climate Change will affect all of us. This is a self-own. Sigh.

Canning Town in Newham has one of the highest rates of poverty and lowest mean pay rates in London. Stopping people getting to work when many will be on hourly pay is wrong. Violence never the answer but XR have again shown no understanding of how *not* to be reported like dicks

Just finished my 5,000 word think piece on how Extinction Rebellion have subverted the norms of protesting by bringing home the reality of climate change to the man in the street, now for a huge gulp of coffee and to check Twitter

The attacks on XR activists are completely disgusting, and big up the brave commuters intervening to hold back their assailants.

But tbh, I think this action was poorly chosen. Stopping working class East Londoners using trains in the name of climate change? I don’t get it.

Like I said here, my position is critical but unconditional support for XR. But that 'unconditional' bit gets tested as it's apparent that many among their number don't consider the need to bring people on board who aren't from the same background as them. https://t.co/aQUBrtd7rM

Predictable backlash to this action by a small part of #ExtinctionRebellion. They had a vote on the issue and the majority of the movement voted against carrying it out. The minority who did this self defeating action should respect the democracy of the movement next time. https://t.co/oEIJcC5toc

This was the poll on XR’s Telegram channel pic.twitter.com/H4VTPHFl0p

1. Change your tactics, we support the cause.

3. Focus on the fossil fuel capitalist class and how to disrupt them

4. Solidarity against the London-wide ban on protest

It should be reiterated that though XR remains a officially decentralised movement with no formal hierarchy, the action depicted in the video was reportedly voted down by XR members, and the group has been quick to condemn the action. XR remain a necessary entity. The scale of the crisis before the entire world is unlike anything experienced by humanity before. The draconian response of the police and state to XR’s actions speak volumes and must be condemned. Yet quite aside from even the events of this morning there need to be serious changes made to the group’s methodology and messaging if they wish to refrain from shooting themselves in the foot.

Of course it must also be noted that violence against peaceful protesters is never okay, and the rhetorical ammunition this morning will give the far right is a horrible thing.

The XR protest was a mistake. But this is a Tory MP supporting mob violence. He should either apologise, or have the whip withdrawn. https://t.co/5suF3L3QL9

If the #ExtinctionRebellion Canning Town protestors hadn't been violently attacked, critique of their tactics (+ decision-making process) would be fair enough

But the violence is being praised by the Far Right all over Twitter: the Left putting caveats on solidarity is dangerous