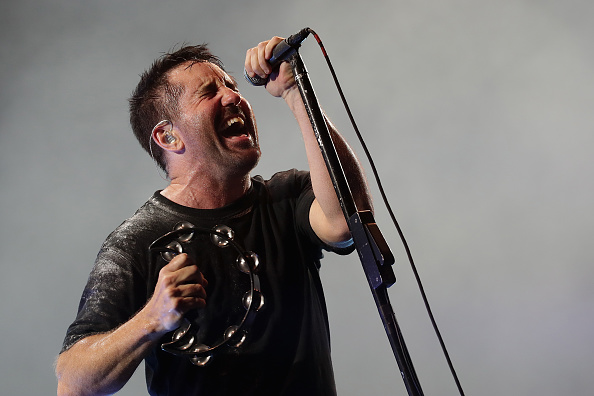 Elon Musk, Who Lost $100 Billion, Is Butthurt Over Twitter Departure of Trent Reznor

As Twitter becomes increasingly uninhabitable, the gravity of what all this means is beginning to take shape, and it’s less ha ha ha, suck it Elon Musk! and more of a huge bummer. It’s hard to build a social media following, it takes years, and there are a lot of people who aren’t celebrities who really don’t have the energy to start from scratch again. We gained around 500 followers one day because we got into a fight with Kevin Smith. How do you reproduce that on Hive? Or Mastodon? I don’t really care, because we use Twitter mostly to promote our posts (and elicit relatively little traffic from there) and because I have this space to express myself to the world anyway. But I do feel bad for, especially, freelance writers who build huge followings and who can point to those huge followings when they are pitching article ideas. It’s not as easy as, “Well, just quit,” and now they are pulled between remaining on and supporting a platform operated by an increasingly right-wing billionaire Nazi edgelord or losing their entire following and a contributing factor in their livelihoods.

It’s exhausting. Also, you can follow the site on Mastadon (or me on Hive).

In the meantime, I’m still hopeful that Elon Musk will get bored with this toy and sell it to someone else before it completely falls apart. Glitches are starting to occur. Most of the content moderators have been fired or left, and Musk is considering automating it; it’s increasingly easy to hack accounts, and there is no one on their support team to help people reclaim their hacked accounts; and the two-factor authentication that should help prevent hacking apparently doesn’t work anymore, either. Advertisers sure as hell aren’t going to run back after Musk allowed Donald Trump back on the platform (and Ye, and the Babylon Bee, and Jordan Peterson), and Musk has already lost $100 billion in personal wealth this year alone. He’s also punted the Twitter Blue program indefinitely, so I have no idea how he plans to make money for Twitter. And yet, he remains the richest man in the world, and one of the worst parts of Twitter now is the thousands of Musk sycophants polluting timelines to fawn all over him. It’s gross. It would be gross if it were someone worthy of admiration, and it’s considerably grosser because it’s someone who decidedly does not.

One person who did not kiss his ass is Gen X icon Trent Reznor, the man who provided the soundtrack to our sullen moods throughout our teenage years. He’s joined the list of celebrities who have abandoned the platform since Elon took over, including Shonda Rhimes, Sara Bareilles, Whoopi Goldberg, Gigi Hadid, and Alex Winter. “We don’t need the arrogance of the billionaire class to feel like they can just come in and solve everything,” Reznor wrote before ditching Twitter. “I don’t feel good being there anymore.”

Musk, who probably grew up listening to a lot of Nine Inch Nails, took the news poorly. In response to another user joking that Twitter did not end after the reinstatement of Donald Trump, Elon Musk replied, “And it turns out that Trent ‘nine inch nails’ Reznor is actually a crybaby,” adding in another reply elsewhere, “I like his music tbh. But maybe Etsy is more his style.” 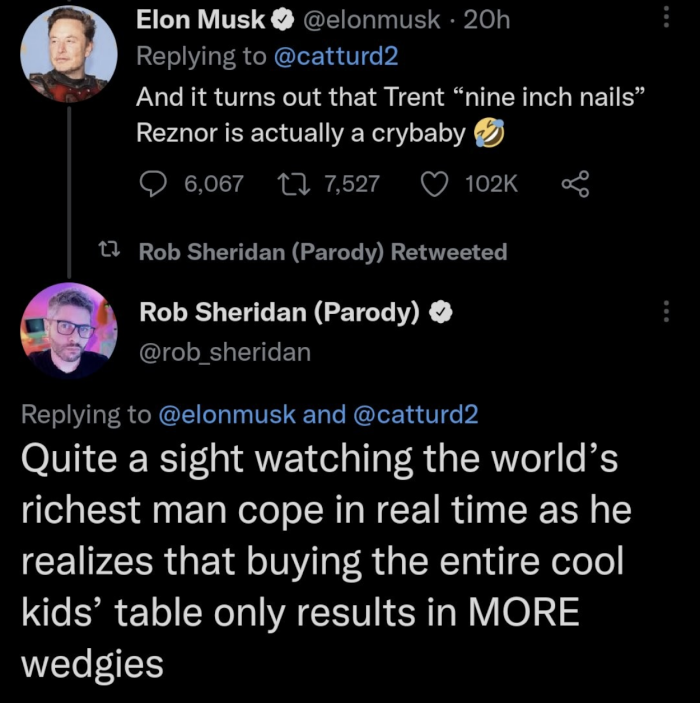 I think the implication is that real men subject themselves to toxic sewers. Elsewhere, and hilariously, Elon Musk is “hiring again” after shedding nearly two-thirds of its workforce.