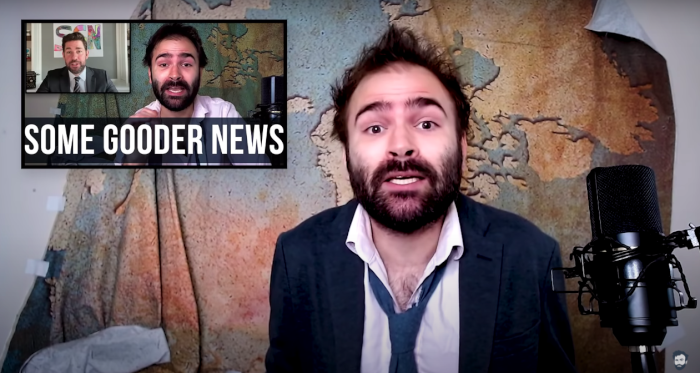 Golden era-Cracked alum Cody Johnston’s ‘Some More News’ is one of my favourite series on the web. I loved it when he and his team ripped apart the notion of ‘cancel culture’. I loved it when they tore into the mainstream corporate media’s war against Bernie Sanders. The ‘Some More News’ team have also done a typically great video on police brutality and the media coverage thereof. Cody’s great on Twitter too, where he tears into all manner of alt-right grifters and dunderheaded morons who try to dunk on socialism with zero self-awareness.

John ‘I’m sure he Googles his own name’ Krasinski loves it! Hi, John! If you wanna grab the concept of ‘no name part-time internet writer occasionally points out John Krasinski’s war propagating bo**ocks’ and sell that off to the Copaganda Broadcasting System, then feel free! There’s nothing I can do about it! You rosy cheeked, needlessly jacked, insincere haircut with legs.

Yes, there’s been a lot of back and forth here in the Pajiba Bunker on the matter of John Krasinski. A lot more talk than one would’ve expected, to be honest. But opinions differ. And that’s cool! Some of us think he’s a cynical, grifting, bullsh*t macho image-projecting, CIA propagandist—a pathetic little war dweeb, basically. Others take a more hopeful and less skeptical view of the situation.

So here’s the next step of the discourse: Me amplifying my boy Cody, in the latest ‘Some More News’ video, in which he takes aim at, among other things, Krasinski’s brazenly cynical content recycling approach to content production, his wealthy parasitic liberal milquetoast bullsh*t both-sides-y approach to what apparently constitutes ‘good news’, and—again—HIS HILARIOUSLY CARTOONISH SHILLING FOR THE MOTHERFU**ING CIA. Enjoy, John:


← Why Is James Earl Jones Trending On Twitter? Because Of Blackface Backlash | Chris D'Elia Defends Himself By Releasing Emails That Show He Is A Creep →