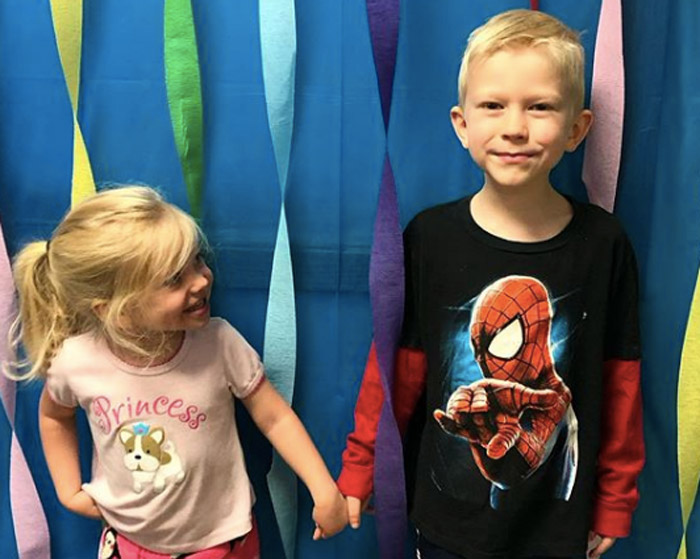 Actors who play superheroes in movies have joined forces to celebrate a real-life hero, six-year-old Bridger Walker, the boy who saved his little sister from a charging dog.

On July 9, the children were in the backyard of a friend’s house. There, a German shepherd mix ran at Bridger’s four-year-old sister.

As Bridger described it to his parents, “I stepped to the side in front of my sister so the dog wouldn’t get her. I kept moving so it couldn’t get past.”

The dog attacked, biting the boy on the left side of his face. He yelled to his sister, telling her to run. When the dog let go, Bridger rushed to her to make sure the four-year-old was OK. She was unharmed. He would require a 2-hour surgery and 90 stitches.

While in the emergency room, Bridger overheard the grown-ups talking about how the family who owned the dog decided it would be put down. His response was “I don’t want anything bad to happen to the dog.” Bridger has two dogs at home. Their names are Thor and Elektra.

When his father asked why Bridger threw himself before the charging dog, the boy’s response was, “If someone had to die, I thought it should be me.”

Following the incident, Bridger’s aunt, Nicole Walker, posted about him on Instagram. She shared pictures of the boy before the attacks and after his surgery, tagging several superhero-playing celebs with hopes they’d send words of encouragement during the boy’s recovery.

I’m not an Avenger, but I know a superhero when I see one. I can only hope I’m half as brave in my life as you are in yours, Bridger. Wishing you an easeful recovery, and many cool looking rocks. ⁣ ⁣ Hey @markruffalo, do you need a teammate?? ⁣ ⁣⁣ Via @blackculturenews_ & @nicolenoelwalker

This little guy is a Super Hero!! Way to go little guy! He stood up to a charging dog that was going to attack his sister and took her to safety! what a guy… so proud of you lil buddy🙌🏿 You are my hero and I know you are your sister’s hero too! 👊🏿👊🏿👊🏿 swipe right for the story ! (Via @nicolenoelwalker ) 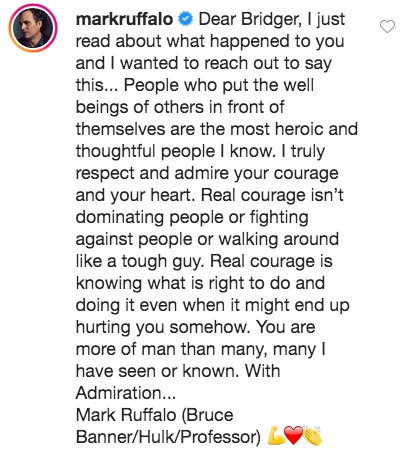 Captain America: The First Avenger’s Chris Evans sent a video message to Bridger along with a promise of a special gift.

His aunt shared a reaction video on Instragram. In it, the boy wonder is dressed as Captain America as he watches the MCU’s Cap commend his heroics.

There are no words. We are so, so thankful.

In the video, Evans says:


Hey, Bridger. Captain America here. How are you doing, buddy?

I read your story. I saw what you did. I’m sure you’ve heard a lot of this over the last couple of days, but let me be the next one to tell you: Pal, you’re a hero.

What you did was so brave, so selfless. Your sister is so lucky to have you as a big brother. Your parents must be so proud of you!

I’m going to track down your address, and I’m going to send you an authentic Captain America shield, because pal, you deserve it.

Keep being the man you are. We need people like you.

Hang in there. I know recovery might be tough, but—based on what I’ve seen—I don’t think there’s much that can slow you down. Bye buddy. (Salutes).

Afterward, Bridger says he feels “good.” His family begins to excitedly talk about what he can do with the shield, and his sister declares, “You can take it wherever you go!” To which Bridger patiently responds, “I don’t think that’s a good idea.”

To see more of Bridger Walker and his sister, or to send him a piece of mail during his recovery, check out Nicole Noel Walker on Instagram.

Hey, all. Please, share my nephew’s story so that it gets as much exposure as it can. We know that our little hero would love some words of encouragement from his favorite heroes. On July 9th, my six year old nephew Bridger saved his little sister’s life by standing between her and a charging dog. After getting bit several times on the face and head, he grabbed his sister’s hand and ran with her to keep her safe. He later said, “If someone had to die, I thought it should be me.” After receiving 90 stitches (give or take) from a skilled plastic surgeon, he’s finally resting at home. We love our brave boy and want all the other superheroes to know about this latest hero who joined their ranks. @tomholland2013 @chrishemsworth @robertdowneyjr @markruffalo @prattprattpratt @twhiddleston @chadwickboseman @vindiesel @chrisevans EDIT: I just finished visiting with Bridger at his home. His wounds are looking so much better! He’s in great spirits, and his awesome personality is intact. He can’t smile too widely yet, but he was grinning as I read some of your comments to him. I’d also like to mention here that the dog’s owners are really great people who have been nothing but kind to Bridger and his family. We feel no resentment toward them at all, and—if anything—there’s only been an increase of love between our families as a result of this incident. EDIT 2: Once again we’re blown away by the amazing comments and messages that Bridger’s receiving. I’ve had lots of inquiries about a GoFundMe. Bridger’s family has asked that any one wishing to help out financially can, instead, donate to @mission_22 or @wwp. Bridger is also a huge fan of Science, especially Geology. So I’m going to start a post where people can share with him pictures of cool rocks that they see. EDIT 3: Once again, everyone’s kindness has meant so much to us. I’m trying to get to all of the messages that I can, but it may take some time. For those who have inquired about sending Bridger some rocks, here’s the address to use: Bridger Walker P.O. Box 22141 Cheyenne, WY 82003 #BridgerStrong

The Walker family is not accepting donations and asks that instead those moved by their son’s story give to these charities: Mission 22, Operation Underground Railroad, and The Wounded Warrior Project.

← Brad Parscale Demoted as Trump's Campaign Manager Amid Unfounded Rumors of Hope Hicks Affair | Chris Cuomo: 'You Tell Me How the President ... Has Time for This Bullsh*t?' →