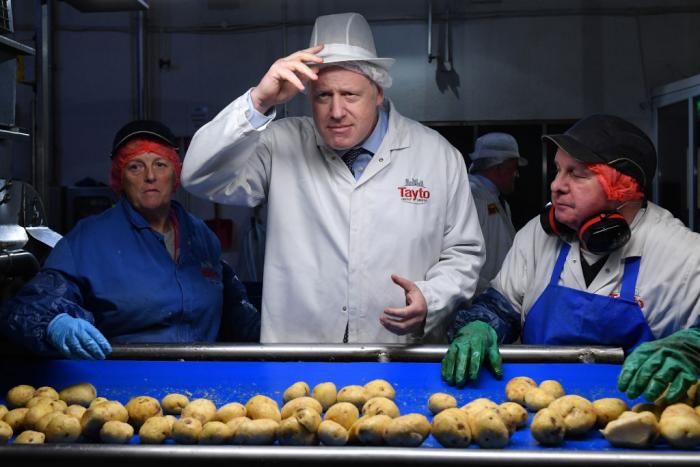 It’s election time in the UK, which means that Boris Johnson, the—*deep, deep sigh*—Prime Minister of Britain, is currently on the campaign trail.

The man who the media feted for years as a brilliant campaigner and unstoppable personality who could trounce anyone in a debate with a deadly combination of charisma, sparkling wit, and a withering choice of retorts in Latin has finally debuted on the national and international stage in the role that he has always sought, and rather than dazzling the public and intimidating the opposition he has proven himself to be the ultimate British paper tiger: A posh white bloke who everyone assumes is competent enough to get things done and deserving of the power that he wields purely by virtue of his appearance, wealth, and accent.

Because despite the overwhelmingly right-wing British media giving Johnson pass after pass after pass while at the same time pumping out a tide of scorn and misinformation about the opposition, the Prime Minister’s contact with the public and with the reality of actually having to do the work of campaigning has…not been going great.

For a start, Johnson launched his campaign with a video that seemed so comically inept so as to make you double take and check it wasn’t from The Onion:

A campaign video here from @BorisJohnson where he has, literally, turned his back on you and we see him leaving Downing Street. pic.twitter.com/xXXn6o7Ahs

Having his back turned on the public he claims to represent is in many ways a supremely accurate picture of Johnson and the type of politics he represents, as the past instances of his actual interactions with the public, away from the insular bubble of Westminster, have shown:

The public know what Boris Johnson is now.

He can't venture out in public without being reminded.

It keeps being pulled. So once again…

Boris Johnson pulled a media stunt at a hospital in Cambridge. Just listen to what this student Doctor had to say about it. These are the people at the frontline.

They know what is happening.

No one likes Boris Johnson#DitchTheToriespic.twitter.com/YzJC9q44ch

And just last night Johnson paid a visit to Northern Ireland, to reassure some members of the Northern Ireland Conservatives that his Brexit deal will protect the hard-won political realities of the region. This time, he was surrounded by party faithful. He could relax into it. Let that famous silver tongue fly. Watch it soar:

Most of the video (limited you 140 seconds) now uploaded pic.twitter.com/3VjJHu2CZJ

The video is shared without comment for obvious reasons!

If nothing else you will need paperwork to 1) determine which goods are going to ROI from GB 2) which goods are originating in NI and which in ROI going to GB. The burden of proving that will be on NI companies.https://t.co/1GMVb9DxFw

Gaze again upon that video. What an extraordinary spectacle it is. The punch-drunk incoherence and flat out mendacity of a speech that’s gotten lost on the way home and taken the wrong night bus and ended up slumped against a park bench, one hand trying and failing at holding the host upright, the other gripping a half-empty glass of champagne. The sad, feeble attempts at powerful, confident gesticulation; a pale, shambolic simulacra of competence. The immensely awkward, shuffling body language of Johnson’s supporters—as hollowed-out and zombified as the state of the Tory party itself, propped up by a support system that is way past its prime and by donations decreed in the wills of departed aristocrats. The depressing decor that makes the meeting look like it’s being held in the basement of a 70’s serial killer (there’re no windows behind those curtains—it’s just more wall). And, the chuckles. Dear fu**ing god, the chuckles, the weak sycophantic exhalations of a diminishing cabal of bloodless, sexless vampires trying to muster some enthusiasm for the last hope for their kind.

And the worst part is, come 13th December that man might still be the Prime Minister, damming the vast majority of the people of Britain—and the world—to misery and death, all because a capitalist media cannot possibly countenance a moderately social democratic party assuming the reigns and redistributing power away from the planet-killing rich.

Meanwhile, on the other side of the political divide, the opposition’s interactions with the public have been going quite differently.

It's an absolutely bleak night in Manchester but they're queuing round the block to see Jeremy Corbyn's first big rally of the election campaign. His critics have had their say today but v clear he can still draw a massive crowd #GE2019 pic.twitter.com/4QudwBhNUX

Given the media clearly present at Jeremy Corbyn’s second campaign rally of the day in Filton, Bristol, you’d be forgiven for expecting full-blown media coverage of his speech today. Nowt so far. Why not @BBCNews @SkyNews @ITVNewsPolitics @Channel4News pic.twitter.com/P1KbSxQdk5

Naturally, you won’t see that on the news. What you will see is this:

What a difference a camera angle makes, even rally is a lie. pic.twitter.com/Hc2NlUijsO

Happy Friday. I’ll see you down the pub.

← Ben Koldyke Forking Kills It as Brent In 'The Good Place' | On 'A Million Little Things': How Many Secret Illegitimate Children Can One Family Have? →