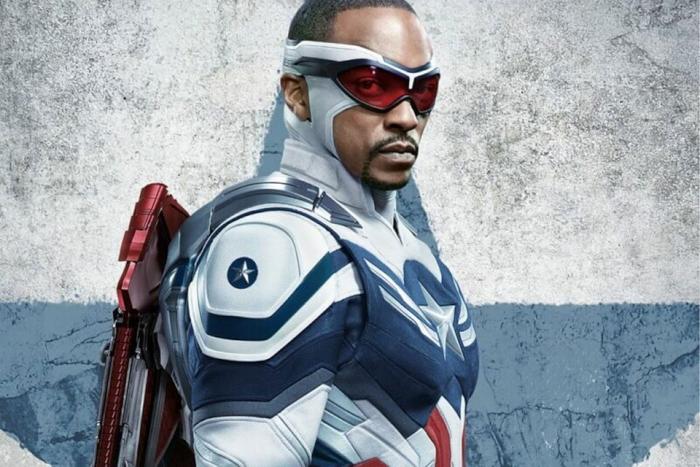 Anthony Mackie Is Now Playing Captain America, Whether You Like It Or Not

Avengers: Endgame, the Marvel movie that had many an audience cheering the final battle between the Avengers and Thanos like it was the Super Bowl, or the Beyhive finding out that they’re finally getting a new album that’s about to drop, opened in theaters on April 26, 2019. And it ended with Joe Biden Steve Rogers passing the shield to his friend and partner, Sam Wilson, a.k.a. Falcon, to become the next Captain America. The Falcon and the Winter Soldier, the Disney Plus series about Sam teaming up with Steve’s other friend and partner, Bucky Barnes, a.k.a. the Winter Soldier, to stop a terrorist cell, and finally overcoming his self-doubt to take on the mantle of Captain America, premiered on March 19, 2021.

And yet, despite those two projects making it very clear that Steve Rogers would no longer be Captain America, and that actor Chris Evans was stepping down from playing the Sentinel of Liberty, there are still some people who refuse to accept this as a reality.

Last week, it was announced by The Hollywood Reporter that director Julius Onah, who helmed the films Luce and The Cloverfield Paradox, was hired by Marvel and Disney to direct the upcoming Captain America 4. The screenplay will be penned by Malcolm Spellman, who was the head writer for The Falcon and the Winter Soldier, and Dalan Musson, who worked with Spellman as a staff writer on the show. What really had Twitter in a bit of an uproar was how the announcement was worded, both in the article and in the tweets from The Hollywood Reporter’s Twitter account. As if simply saying that “Anthony Mackie is now playing Captain America” was an impossible task.

It is unclear if Chris Evans would reprise his role as the first #CaptainAmerica (though if the question of who is entitled to carry the shield continues, all bets are off). Having stacked casts in solo outings is a key Marvel ingredient at this point https://t.co/DmPYFmBmgm pic.twitter.com/AMakpXGA9g

Here are some of the responses to those tweets from The Hollywood Reporter (Instead of embedding the actual tweets, I’m only sharing what was said in the tweets and not who said them. Because they don’t need any further attention from racist trolls who would be petty enough to seek them out, though I’m sure those trolls would get their feelings hurt right before they end up getting blocked and reported.)

THR: BuT wHo EvEr CoUlD cApTaIn AmErIca BeEeE?!?!”

“Anthony Mackie is the new #CaptainAmerica in Marvel’s upcoming film” there I fixed it. 🤨

“To even question Sam Wilson’s legitimacy after he already debuted his Captain America identity is a prime example of systemic racism,
@THR.”

“Damn. If only there was a show to explain how this happened.”

“crazy how everyone is fine with yelena being black widow or kate being hawkeye but sam being captain america is suddenly a problem. wonder why that is.”

“They have a whole show about him taking on the mantle of Captain America. How is this a question or a tweet? Now Chris Evans have to tell y’all that Sam Wilson IS Captain America. Look at your choices.”

“The comments confuse me because in the comics there are multiple people who take up the mantle of Captain America and yet Sam Wilson is where y’all have a problem ??? It’s giving racism.”

“I just don’t understand how people can see a scene where Steve Rogers is literally handing the shield to Sam Wilson, and then see a SHOW where it’s about Sam accepting the shield and the responsibility with it, and still not accept that Sam Wilson is Captain America now.”

Y’all insist on cherry-picking what reality you’re willing/eager to acknowledge as fans (as is your right), but it doesn’t change the truth, just reveals who Y’ALL are. 🤣 #MCU #Marvel”

“I literally do not care if you dislike Anthony Mackie for whatever reason. Sam Wilson is our Captain America and y’all better get used to calling him that. It’s actually ridiculous that there’s any discourse surrounding this.”

The backlash to these tweets became so loud and so intense that it attracted the attention of one notable person: Chris Evans himself, who had just one thing to say in response to The Hollywood Reporter’s confusingly-worded tweets…

You would think that would be enough to settle the matter once and for all. But because Twitter is Twitter, and because it’s a hellmouth of an app that gives millions of people worldwide the ability to talk directly to the celebrities that they love and hate, some of those people really had the nerve, the cheek, the gall, the audacity, and the gumption to hop into Chris’ mentions and be like, “Nuh-uhh! Sam Wilson is not MY Captain America! Steve Rogers is my Captain America, and he always will be!”

It’s not surprising that fans have a difficult time accepting new actors taking over to play their favorite superheroes from the actors who they first saw playing them onscreen. For some, Christopher Reeve will always be the best version of Superman, Michael Keaton will always be the best (live-action) version of Batman, Tobey Maguire the best version of Spider-Man, and so on. But it’s never surprising, especially not to anyone who isn’t white, to see how some fans respond to not just seeing their favorite character recast and played by someone new, but recast and played by someone who isn’t white. Just a few days ago, actress Candice Patton, who for eight seasons has played Iris West on the CW series The Flash, spoke to The Open Up Podcast about the racism and harassment she was dealt with from Internet trolls for many years (if anything, that racism and harassment has been aimed in her direction ever since her casting was first announced), and how there has been little to no support to defend her from that behavior, not from The CW or from Warner Bros.

Patton alleged “there were no support systems” at the time and “it was just free range to get abused every single day.”

“There were no social media protocols in place to protect me, they just let all that stuff sit there,” she added. “It’s just not enough to make me your lead female and say, ‘Look at us, we’re so progressive, we checked the box.’ It’s great, but you’ve put me in the ocean alone around sharks.”

In order for changes to be made, Patton stressed that there had to be “people in positions of power who understand my experience and understand the Black experience, the Black female experience, who can say, ‘Ok, she needs protection.’”

“I think any time you hire anyone who is a minority of any kind you have to be prepared to protect them,” Patton explained. “Because in the real world, we are not protected. Just because you put us on a fancy Hollywood TV set or film set, with the hair and makeup and you assume we’re safe, we are not safe.”

“It’s like if I get pulled over at 2 a.m. in Jackson, Mississippi, by a white cop. Do you think he gives a shit that I’m Candice Patton from The Flash? It doesn’t matter,” she added. “We still need protection because the world sees us in a certain way. When I step onto set and everyone working around me is white, I’m not protected and I will never be protected. And that’s not to say everyone has bad intentions, but they have blind spots and that can also contribute to my harm. It’s been a learning experience I’m sure for companies and corporations and productions.”

It should also be noted that what Candice Patton has been dealing with has been a topic of discussion for many years amongst Black and brown fans of Patton and her work, so this interview didn’t really come as a shock to most of them.

John Boyega. Kelly Marie Tran. Leslie Jones. Ray Fisher. Zendaya. Michael B. Jordan. DeWanda Wise. Jurnee Smollett. The Black and brown cast members of The Lord of the Rings: The Rings of Power. Idris Elba. Anna Diop. Tessa Thompson. Moises Ingram. There has been no shortage of talented Black actors who are told by the f-ckboys and Pick-Mes of “Get Woke, Go Broke” Twitter (as well as their equally loud and hateful counterparts on YouTube) that their presence in comic-book movies and science fiction/fantasy movies and television shows aren’t needed or wanted, that it isn’t believable or realistic, and that they really don’t like to see the things they like watching to get all “woke.”

Fortunately for those actors and their fans, the hatred that is expressed in certain corners of the Internet isn’t enough to stop them from doing their jobs and doing what they do best. And the people who support them and want to see them bring new and/or familiar characters to life onscreen have been and continue to do a much better job of letting those actors know how loved and respected and appreciated they are.

After Chris Evans threw his hat into the ring to let everyone know where he stands, it didn’t take long for The Hollywood Reporter to come correct and explain themselves via Twitter that they should’ve done a better job with their original article.

We hear you. We weren't clear. Yes, Anthony Mackie IS Captain America https://t.co/i3FSRQV8wT

Even the writer of the article himself, Borys Kit, showed up on Twitter to set the record straight.

Certain phrasings in my story seem to have caused anger & consternation. Let me clarify: Sam Wilson, played by Anthony Mackie, is Captain America. And personally, I think that's a fantastic choice. https://t.co/jd2QHcfZI4

Would Borys Kit and The Hollywood Reporter have felt the need to do this if Chris Evans didn’t get involved and shine a bigger light on their poor choice of words? You be the judge.

It’s too early to tell what we can all expect from Captain America 4. But whether or not you’re looking forward to seeing it when it opens in movie theaters worldwide, we do know this:

Sam Wilson is Captain America, and he is and will continue to be played by Anthony Mackie.