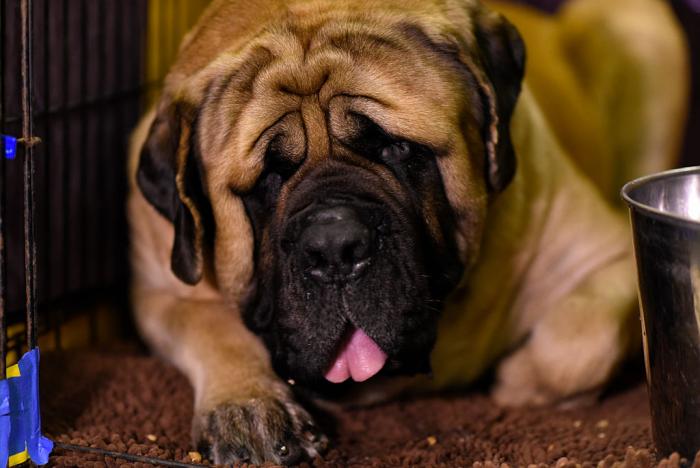 A Really Big Dog Had To Be Rescued From a Hiking Trail. Everything Went Well. That's It. That's the Story.

Look, some days I’m just damn tired, you know? Just worn down completely to my bones, physically and emotionally. Today is one of those days. Coffee doesn’t help. Exercise does nothing. Even waking up to the news that Ilhan Omar has endorsed Bernie—and that Rashida Tlaib and AOC are set to follow suit (dear lord, such a lot of white male Bernie Bros!)—doesn’t really do much.

Days like that, the only story that’ll really do it is a story about a dog.

So here’s a 3-year-old, 190-pound Mastiff good boy called Floyd, who went on a hike with his human and had to be rescued by a kindly team of volunteers at the Salt Lake County Sheriff’s Search and Rescue. The full story is on the organisation’s Facebook page, but this is the meat of it:

SLCOSAR got a call for a 190-pound, 3-year-old Male injured Mastiff about two miles up the Grandeur Peak Trail. Several hikers had called Unified Police to report that the dog and his owner were on the trail and not able to move. Salt Lake County Search and Rescue members went into action and headed up the trail to make sure Floyd could get off the mountain with his human before it got too cold. Floyd was packaged in a litter and carried down the mountain. Floyd was a good boy and was happy to be assisted. Floyd his human and all the team members got off the mountain around 10:30PM.

And here is a video of the rescue from ABC News:

Authorities rescued a 190-pound mastiff named Floyd from a mountain near Salt Lake City as temperatures began to drop and several hikers called to report that the dog was on the trail with his owner and unable to move. https://t.co/ggFga8882V pic.twitter.com/kbsodTTHkI

As stated above, Salt Lake County Sheriff’s Search and Rescue is a volunteer outfit. Their donation page is here.

← 'Sunnyside' Wasn't Canceled, It Was 'Relocated' | Review: 'Greener Grass' Feels Like 'PEN15's Older, Weirder Sister, And We're Into It →