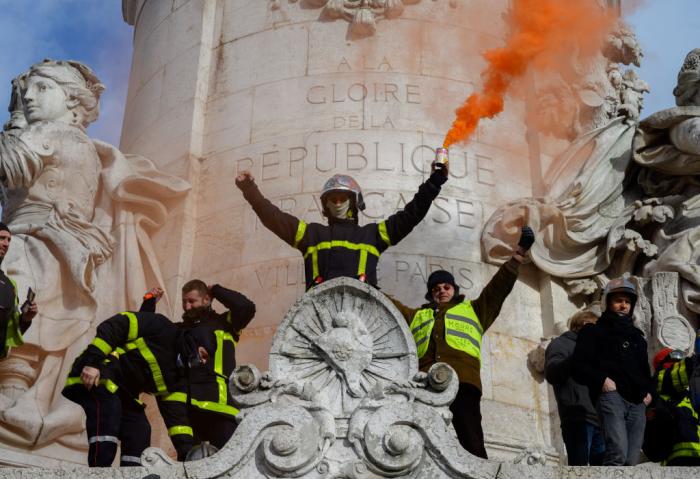 The newspapers and nightly news are rocked with a constant barrage of imagery—footage of endless protests, videos of unrest and fire and shocking footage of police violence. Op-ed pieces in the New York Times and The Guardian decry the tyrant who so cracks down on his own citizens. ‘Won’t something be done about this affront against democracy?!’ cry the panels of well-paid liberals.

Oh, no wait. No. None of that’s happening.

Because it’s not an ‘official enemy’ cracking down on his own citizens. It’s Emmanuel Macron of France. ‘One of us.’ Our ideological bed mate. Of course, occasionally the protests in France make the news, but if you ever wanted to see a stark illustration of the political function the mainstream media performs, a comparison between its coverage of ‘acceptable’, ‘righteous’ protests and ‘unacceptable’ ones that need ignoring would do. Because it’s been about 60 weeks—60 weeks!—since protests began against the Macron administration’s regressive fuel tax but which have since morphed into a general repudiation of its capitalist, elite-friendly policy platform and the relative silence in the media about it speaks volumes. In 2017, as the liberal media was celebrating the election of Emmanuel Macron—seen by them as a saviour of ‘sensible’ third way centrism against the encroaching forces of both far-right populism represented by Marine Le Pen’s Front National and the progressive, left-wing populism of Jean-Luc Melenchelon—I wrote that:

Unless Emmanuel Macron’s administration succeeds in ameliorating the conditions that have allowed the Front National to rise; unless it can reverse the course that has led to the far right’s current position of gaining millions of votes and, perhaps even more dangerously, being able to influence political discourse as much as it has—unless, in short, it can reduce Le Pen’s presence and message into irrelevancy then this election has just granted us, at best, a half-decade reprieve from the creeping spectre of fascism. Racism and blind hatred can only ever achieve so much by itself, its lame duck foundations and incoherence often crippling itself. Harnessed onto the powerhouse that is economic anxiety and material need, however, it can become a frighteningly potent beast.

[But] Macron is no radical of course. He was a prominent member of the outgoing Hollande administration as well as a key driver behind its unprecedented attack on labor and its final breaking with the left, but nevertheless, purely by virtue of being seen to be coming from outside of the established two-party system, he embodies something, if only symbolically, that voters of all stripes are hungry for: change. There is no reason to suspect that Emmanuel Macron—market-friendly, free enterprise loving, and EU-wedded Macron—will be the person to deliver that change.

Sure enough, Macron quickly did what the left warned he would do: Enacted a full speed ahead neoliberal economic agenda, intentionally blind and deaf to the reality of the situation around him and contemptuous of the needs and wellbeing of his own country. Why? Because the smartly dressed photogenic ‘centrists’ so often venerated by the capitalist mainstream media as sensible politicians trying to find a middle ground between competing visions of society are nothing of the sort. They are market extremists doing the bidding of capital, popular will or pragmatism be dammed. So Macron did as Macron was always going to do. And because this is France we’re talking about, people took to the streets. A year and a half after Macron’s election I wrote about that too.

The struggles playing out there are a microcosm of the world at large. France is a nation of 67 million people and 643,801 square kilometres. From the Atlantic-whipped coast of Brest to the lavender-streaked valleys of Provence, the arm of austerity and neoliberal economics reaches far and touches all. An ever-widening gap between rich and poor, a decades-long squeeze of living standards, a loosening of labour laws allowing for greater exploitation—the people subject to this agenda did not vote for it, they did not consent to be governed this way, and they can only be pushed so far before they react; if the rulers step outside of the agreed barriers of play, so too will those they rule over. The inciting incident in France? A regressive fuel tax that shifts the burden of climate change onto working people, introduced by France’s President Emmanuel Macron. Faced with the prospect of looming, catastrophic climate change, the French administration decided not to target the big businesses that create the vast majority of the pollution that causes climate change, but instead the ordinary working people who depend on their cars in an economy that is stubbornly being held back in a carbonised past. So the people donned yellow jackets and began to march.

And that is what has been going on in France since then. Pretty much ceaseless protests of varying intensity. Hundreds of thousands of citizens taking to the streets all over France, in overlapping and cascading waves of strike action, marches, civil disobedience, and direct action. The French state has responded predictably: With at times truly brutal violence and a State of Emergency being called. The latest act in the French protests has been going on since December 2019, and it has seen the country striking against Macron’s proposed pension reforms that would see millions of workers having to work beyond the current legal retirement age of 62, or receiving a dramatically lower pension. As of January, 61% of France supports the strike. National crowdfunding efforts have raised more than 2 million euros for the strike actions. Most recently and visibly it has been striking firefighters feeling the arm of the state, though over 30 unions are involved and multitude walks of life represented.

Clashes between firefighters and police officers in France today.

Why is mainstream media silent on these anti-government protests?#greve28janvier pic.twitter.com/XFeXkGWIRV

Protest vs pension reforms in France:

Police Forensic Investigators joined in the protests this week.

Wow the people of France are now marching through the streets with torches as the protests against pension changes go to the next level.

France & yet the eruption of mass protest meets with complete silence in British media 🤔 pic.twitter.com/xaAOjlOc4B

Lawyers, firefighters, and even police forensics experts have thrown down their uniforms and joined the protests in France.

Now, tax collectors are throwing down the tax code and joining in the mass protest.

French workers on strike went out at night across the country with torches while shouting "revolution". #greve pic.twitter.com/kkLH5D7rZC

this is the neoliberal hell created by macron: police beating firefighters on the streets, while the entire western press ignores itpic.twitter.com/qtZufIwPdy

We are at a dangerous, febrile moment in history. Having failed the vast majority of people the old economic order has collapsed, and those people are now hungry, desperate for change. Status quo politicians and technocratic managerialism won’t do it anymore. Either there is a left-wing populist, progressive vision of hope offered to them, or something far nastier and long since thought buried in our ugly past will rise up to take advantage of all this pent up anger. As I wrote in the piece on Macron’s election:

As the clock ticks and the seasons wear on the momentarily embarrassed far-right will bide its time and build its base, promising salvation with a snake’s tongue as always. If real, substantive alternatives are not provided by the incoming administration, disaster awaits France in the next decade.