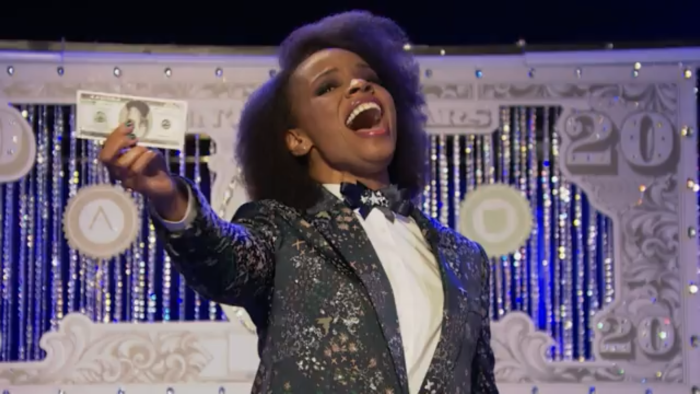 I would wager $20 of my own money that Donald Trump has never even seen a musical and like Trump, I won’t pay up if I’m wrong. Just days ago, James Corden slayed the sitting president via song. Now Amber Ruffin is joining in on the toe-tapping fun as well!

Remember, back in the ancient times, when the New York Times reported that Trump is over $400 million in debt? Well, just in case you forgot, one of Peacock’s treasured talents is here to remind you with a musical number!

Ruffin begins the segment by mentioning Trump’s embarrassing and possibly incriminating debt but suddenly she’s distracted… by $20. After checking to make sure it doesn’t belong to anyone else, she takes it into her possession and with it comes a realization. She now has $20 more than the president.

Once you’re done giggling at lines like, “it really blows my mind, we’ve both had our credit cards declined” and “maybe America works for the rich and the poor, the poor being Donald Trump,” you can also join me in celebrating the idea behind the catchy tune.

The coverage of Trump’s taxes should be a knockout blow. However, in an ever-crowded news cycle full of gobbledygook, it seemed to barely scratch the surface. Ruffin covering it several weeks later keeps the condemnation coming as it should. Normally, I wouldn’t want to revel in the mocking of someone’s money troubles. Yet here I am, gleefully enjoying Ruffin and her sidekick Tarik lambasting the president for being broke. Is it easier because he often brags about being rich and winning and all the other bs that spills out of his COVID-infected mouth?! You’re damn right.

So bring it on! If anything, I’ll take a We Are The World style sing-along featuring every late-night host from across the networks dunking on Trump for not even being a shell of what he claims. He’s a fraud, and if The Producers taught us anything, it’s that frauds eventually get what’s coming to them!