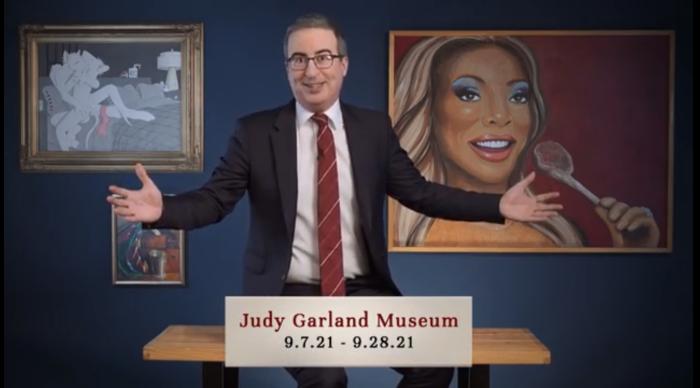 Some art needs to be appreciated in person. It’s as simple as that. The Mona Lisa may seem impressive when viewed on a pamphlet, but seeing it in person makes the most of its majesty. The same can be said for a tenderly drawn painting of two male rats in a sexually charged embrace. Seeing it onscreen is one thing. Marveling at its magnificence when it’s right in front of your face is another. Thankfully, John Oliver wants us to see these rats making sweet, passionate love in person!

Last year, the cursed 2020, Oliver delivered his show from an empty white void. Whilst in that void, he began collecting pieces of art featured in some of his segments: Wendy Williams eating a lamb chop. A painting of a sad tie by Judith Cudlow. Two rats who are clearly in love and embracing as lovers should. It is known as Stay Up Late. All three of these works will be taking their show on the road. Five museums will host these masterpieces. You can find out which ones by going to johnoliverhasyourraterotica.com.

Usually, I would just link that onto a word or phrase, but let’s be honest, this option is better.

On a personal note, I would like to say just how thrilled I am with how Oliver staged this video. As someone who often has to collect screencaps to write up videos, I want the people I’m capping(?) to look good. It turns out that late-night hosts like to move around, often making it difficult to score a nonblurry cap. Not here! Oliver and his background are utterly stoic. Just like two rats sharing a post-coital kiss.

I’m nowhere near any of these museums. So please, if you can and do witness these galleries in person, snap a couple of pics. Share them with us here at Pajiba. In fact, send them to Dustin directly as a show of respect. It is what the rats intended.