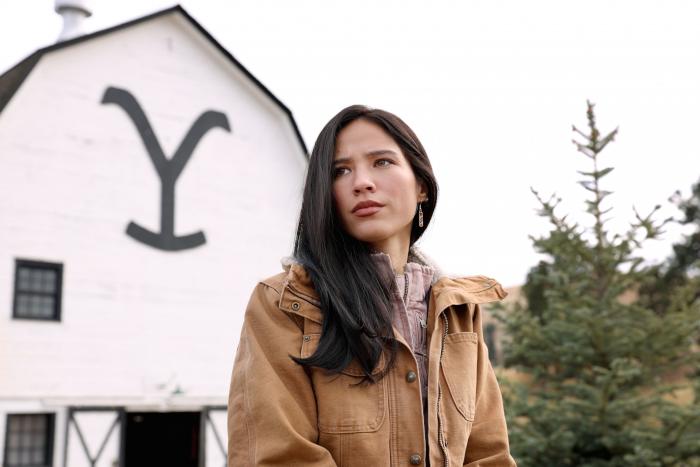 'Yellowstone' Doesn't Have a Monica Problem, It Has a Taylor Sheridan Problem

I’ve been writing about television for many years now, and one thing that’s an inevitability in almost any series that enters the zeitgeist is that there is almost always going to be an annoying character that everyone hates, and in almost every instance, the annoying character that everyone hates is a woman. There’s Dana Brody, Lori from The Walking Dead, Andrea from The Walking Dead, Rita from Dexter, Skyler White, Winona Hawkins, Kim Bauer, and even Karen from The Office, to name a few.

That’s exactly what’s going on in Yellowstone. Over the summer, series star Kevin Costner tweeted out to his followers asking them what their hopes for season five of the series are, and the overwhelming response was: Kill Monica. Write her out. Get rid of her. That’s certainly not the fault of Kelsey Asbille, who plays Monica Dutton. It is entirely a function of bad writing, specifically that of Taylor Sheridan (and the handful of other men who contribute to the scripts).

The biggest knock against Monica is that she wallows in her trauma. Viewers don’t like her because she’s a drag on her husband, Kayce (Luke Grimes), who would otherwise be a more central figure in the Dutton family if he were free from his wifely chain. Kayce is never given a chance to progress or evolve because he’s always being called back to deal with his controlling, long-suffering wife.

She’s controlling and long-suffering because that’s the way she’s written. While Beth Dutton (Kelly Reilly) gets most of the best lines, gets to f*ck men and f*ck them over, and is given a mic-drop moment in every other episode, Monica is the show’s punching bag, sometimes literally. She’s not a character so much as she is an obstacle for her husband to navigate.

In the first season, Monica didn’t want to move onto the Dutton ranch with Kayce because of the danger the family posed to her and their son, Tate, which was borne out later when their son had to shoot a contract killer who was choking the life out of Monica. Monica had to spend the next several episodes nagging her gaslighting husband to care for their catatonic son, who — like Monica herself — was suffering from PTSD. Meanwhile, earlier in the series, Monica tried to break up a fight on a college campus and got hit and knocked unconscious to the ground, so she spent the next few episodes in a wheelchair, using a cane, going to physical therapy, and essentially being a drag on the family. When Monica’s not recovering from injuries, dealing with trauma, or being choked to death, she’s otherwise put in a position where she is asked to forgive her husband for killing her brother. And when she is reluctant to do so, who do we side with? The man who killed her brother.

Yellowstone is a melodrama. Shootings, heart attacks, murders, and near-death experiences are commonplace. That’s fine. That’s understandable. The problem is that all the other major characters in the series have gone through them, but they are heroic, resilient survivors. Not Monica. Monica is an anchor tied around not only the neck of her husband but the entire murderous Dutton family. No wonder viewers want her to die.

In this week’s fifth season premiere, it briefly appeared that viewers would get their wish. While Kayce was out dealing with ranch matters, Monica went into labor and had to drive herself to the hospital. It doesn’t go well. She is in a terrible accident and thrown from her car. She loses their baby. When John Dutton pays a visit to the hospital, he sees his emasculated son Kayce curled up in a hospital bed with his wife, essentially taken out of the game again by his ailing wife.

It’s clear nothing will change in season five. Monica has had yet another tragic incident that she will need to recover from, and when Kayce is prevented from going out to drag another Canadian mountie through a river by a rope because he has to tend to Monica’s needs, the audience will turn on her again. But don’t blame Monica. Blame Taylor Sheridan. He’s the one that turned Monica into Debbie Trauma.


← If You Want to Save the World, Choose Your Targets Wisely | 5 Shows After Dark: 'La Brea' Season Two Fall Finale, 'Once Upon a Time in Londongrad' Premiere Peacock →