Let’s talk about episode two of The Watchmen, “Martial Feats of Comanche Horsemanship,” beyond what we have already recapped. Specifically, let’s look at some of the theories and speculate.

Is Will Reeves the Hooded Justice?

This is the chief theory that emerged from the episode. Is Will Reeves, the 105-year-old man, the original Watchmen superhero? It makes perfect sense. Will Reeves would have been around 24 years old when Hooded Justice got his start as a superhero. Will Reeves is impervious to heat (he drank a hot cup of coffee with a single gulp; he reached into a pot of boiling water and pulled out a hardboiled egg); he can break free from handcuffs; he can apparently lift over 200 pounds despite being 105. The connection to the possible mother of Rolf Muller, Annika Pampel’s Fräulein Müller, through the “Coloured Soldiers of the States” flyer she typed that Reeves’ father left with Will would seem to support the theory, in addition to the friends Will has “in high places.” He also says that “it’s been a long time since I was back home.” Reeves is originally from Tulsa, but Hooded Justice fought crime in NYC. Maybe that’s where Reeves was? (Or maybe he was on another planet, and he needs those pills to reacclimate).

It’s a strong theory, which is why I am suspicious of it. Lindelof doesn’t make things that easy for his viewers. He will provide clues, but those clues are often not obvious until the conclusion is revealed. This seems like a conclusion Lindelof wants us to draw, which either means that Reeves will be revealed as the Hooded Justice in the next episode because it’s not supposed to be a mystery, or that theory is dead wrong.

Look: The Hooded Justice was thought to be Rolf Müller, but it’s clear from American Hero Justice — the Ryan Murphy-like show within the show — that they’re aiming to debunk that theory. Would they do that without knowing who the actual Hooded Justice is? And if they knew and it was Will, wouldn’t he know that his identity had been outed?

Everyone assumes that Chief Crawford is a bad guy. He had a KKK robe hanging in his closet. He snorts cocaine on the regular (although it’s treated with such indifference that it may be legal under the Redford Administration). He was with Angela when she woke up after the White Night Massacre. Will Reeves suspects him of having baggage in his closet. There are a lot of clues to point to Crawford being a “bad guy.”

But again, this is not how Lindelof operates. He directs you to the right hand, so you don’t notice what he’s doing with the left hand. The left hand here may be Angela. How did Angela escape the White Night massacre? Where was her husband? Why didn’t she cry over the loss of her partner? Why was she so eager to beat the hell out of that one dude behind closed doors after Looking Glass interrogated him, but reluctant to participate in the Nixonville raid? Why is Looking Glass suspicious of her? What’s the significance of her being from Vietnam, which presumably became a state around the time she was born (in this universe, the U.S. clearly won the Vietnam War and colonized Vietnam)?

There’s definitely something going on here. To wit: Angela was going to give Calvin a “package” on Christmas before the White Night Massacre. What if that “package” was news that she was pregnant. What if getting shot in the gut robbed her of the ability to have children? What if she resents the hell out of Seventh Kavalry for the loss of her child and the death of her partner? What if minimizing their power and letting them fester underground wasn’t enough for Angela? What if Angela provoked this war, so she could get Article Four suspended, so she could exact her revenge on the Seventh Kavalry by completely wiping them out?

I don’t have much to add to what’s going on with Adrian Veidt and his Dr. Manhattan recreations with clones, except this: Veidt, if that is his name, is not of this world, or in this world. Check out Lindelof’s script page describing Veidt’s whereabouts. “We don’t know exactly where we are” (emphasis his), and it’s “almost magical. Like a PAINTING.”

You mean, like a painting where tomatoes grow on trees? That’s not of this world. 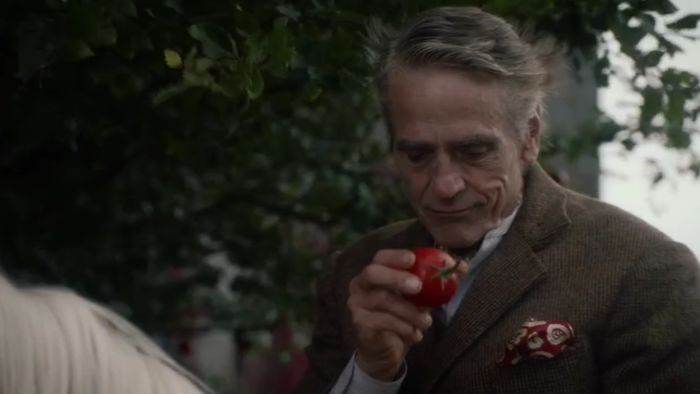 Why is there a pirate flag on Veidt’s property? (Someone didn’t know how to make this “world” and made a few mistakes.) Love the Ozymandias quote in the promo, and look who it is: Laurie Blake, Silk Spectre herself. 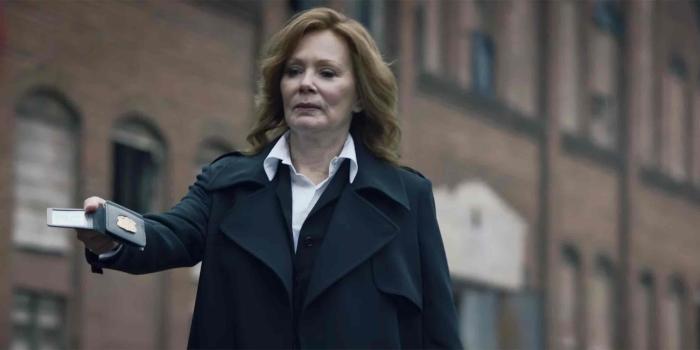 ← Review: Antonio Banderas Could Win the Best Actor Oscar for 'Pain and Glory' | Trumpdates: There's Still Only a Very Slim Chance Trump Will Be Convicted →