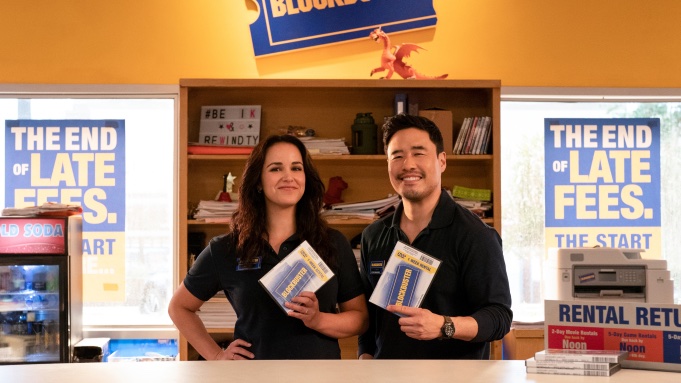 Would You Watch Melissa Fumero and Randall Park in a 'Blockbuster' Netflix Series?

A lot of trailers have dropped over the past week thanks to New York Comic Con, the season, and streamers’ desire to keep us all paralyzed with indecision over what to watch next. Let’s take a look at what’s coming.

Beginning with Paramount+, it seems like the streaming service kept afloat by Star Trek fans is looking to up its game by going for the kids and adults alike. First up is Blue’s Big City Adventure, a CGI feature presentation of the beloved children’s show. The title tells you exactly what to expect — Blue and her real-life buddy Josh (Joshua Dela Cruz) explore the big city, complete with musical numbers and guest stars. Original host Steve Burns returns, as does his original replacement Joe (Donovan Patton) BD Wong and Alex Winter are also in the mix.

Unrelated in every way unless Blue suffers from lycanthropy is Paramount+’s buy-in on werewolves, beginning with the Teen Wolf movie. I admit I never watched the show but I assume they’re no longer teens? This is a direct sequel from the MTV series and doesn’t arrive until next January 26, but some folks are already excited.

But that’s not all! Coming from Teen Wolf creator Jeff Davis but unrelated to his original furry bois is Paramount+’s Wolf Pack. Some California teens become werewolves after a wildfire awakens a hirsute creature that just needs some love. Or flesh. The big draw here is Sarah Michelle Gellar, who both executive produces and stars as some sort of cop trying to stop all the violence. It also arrives January 26.

Moving over to Netflix, we’ve got a new trailer for Wendell & Wild, a spooky offering from genius animation director Henry Selick (The Nightmare Before Christmas, Coraline) and the equally great Jordan Peele (Nope, Us). Kat Elliott (Lyric Ross) is beset by demon brothers (Keegan Michael Key and Jordan Peele) after a personal tragedy. I bailed on the trailer early, as it seems spoiler-heavy, but it looks like another strong offering from Selick that should be just spooky enough without terrifying little kids. Wendell & Wild arrives October 21.

Netflix’s The Dragon Prince had a rough start, with a jerky animation style which never looked right no matter how much the show’s creators tried to insist we were wrong for not liking it. Subsequent seasons more than made up for it, with powerful storylines that focused on consequences and equitability set in a gorgeous fantasy realm. My kids absolutely love it. Season 4 promises the return of several lost characters, as well as figuring out how to move on once most of the hostilities have been resolved.

I don’t get the nostalgia for Blockbuster. Local video rental businesses, sure. I spent hours combing the shelves for the next random find, every bad horror and sci-fi movie I could get my hands on, every poorly-dubbed anime or kung fu flick recommended by the shop’s film fanatic owner. It was great. But Blockbuster, to me, was a fluorescent nightmare, brightly lit with dead-eyed clerks who only wanted to get you checked out as quickly as possible. They carried a lot more blockbusters, though they never had enough copies in stock, and their independent or low-budget selection always sucked. Maybe my local store was the exception to the rule, because it sure feels like my generation’s sepia-toned memories are a lot more fond than mine.

That’s the only explanation for Blockbuster, Netflix’s new series hoping to cash in on that Gen X and millennial nostalgia. Coming from the writers behind Superstore and Brooklyn Nine-Nine, Blockbuster features Randall Park as the manager of the world’s last Blockbuster store and his struggles to remain afloat. Also starring Melissa Fumero (Brooklyn Nine-Nine) and Madeleine Arthur (Devil in Ohio, Snowpiercer), Blockbuster is due on November 3.

Over on HBO, His Dark Materials’s third season arrives December 5. I really thought it had been canceled, despite fairly solid reviews. I just never hear anyone talk about it. But they’re going to finish the story, and that’s the important thing since my daughter has only now discovered the brilliant books and will no doubt want to watch the series once she’s done.

HBO Max also gave us a preview of Velma, the adult-oriented Scooby-Doo spin-off from Mindy Kaling. Details are sparse — no word on Velma’s sexuality — and we don’t even have a start date, but the teaser’s got a very meta vibe that reminds me of Harley Quinn and the cast is stacked! Kaling, Sam Richardson, Constance Wu, Melissa Fumero again, Ken Leung, Gary Cole, Ming-Na Wen… Everyone is in this thing. Here’s hoping they can pull it off.

The Mysterious Benedict Society was one of my most pleasant surprises in 2021. It’s a little twee for my taste but even so the delightful cast and solid if absurd writing made it a hit in my house, and it quickly became our top pick for Friday Pizza Night viewings. Season 2 arrives on Disney+ October 26, and the entire cast returns to do battle with Dr. L. D. Curtain (Tony Hale). He’s moved on from making everyone scared to making everyone happy, but either way it boils down to world domination. I’m excited.

I’m less optimistic about The Wheel of Time return. I made a lot of excuses for Amazon’s butchering of Robert Jordan’s towering fantasy series, mostly because the cast was good and I was thrilled to finally see the series I loved most in my teens on the screen. It had its highs and lows up until the season finale, which frankly sucked. The changes to the original story made no sense, and it smashed together multiple novels in an attempt to make it all work. It didn’t, and my disappointment has only grown since. The brief preview offered by Amazon doesn’t give us much to work with, apart from a couple quick flashes. It appears the Seanchan, invaders from across the sea, have captured Rand. Ishamael, most powerful of the Forsaken, is free to work his will on the world. Nynaeve has a sword…? Most importantly, Loial is alive! If he was truly dead I would be angry.

No word on the release date yet, though before the end of the year seems likely. The last few episodes of The Rings of Power have really set the bar for what I expect from an Amazon fantasy series, so hopefully showrunner Rafe Judkins ups his game.

Selena Gomez wasn’t ever someone I thought about. Her music isn’t my taste, I never saw any of her Disney stuff, and she’s too young to have been part of my pop culture landscape. Only Murders in the Building changed that. Turns out she’s a great actress in her own right, and easily holds her own working with two of the greatest comedic actors of the modern age. She’s delightful. Apple TV+ is releasing a documentary about her recent struggles with lupus, depression, and anxiety called Selena Gomez: My Mind & Me this November 4, detailing the journey she’s taken to mental and physical health. It’s also probably not my thing, but it looks well-made and I can empathize with what she’s gone through.

AMC+ follows up its new Interview with the Vampire series — which is so highly rated it’s almost enough to get me to sign up for AMC — with another Anne Rice property, Mayfair Witches. The series focuses on a young neurosurgeon’s discovery that she’s the next in a long hereditary line of witches, and how it upends her life. I read the first book back in the day and it didn’t resonate with me, but this looks good enough to check out. It stars Alexandra Daddario (SWOON), Jack Huston, Tongayi Chirisa, and Harry Hamlin, and arrives January 5, 2023.

Last but certainly not least is Enola Holmes 2, coming from Netflix on November 4. The original was a Field family favorite, with Millie Bobby Brown playing the younger sister of Henry Cavill’s Sherlock and a talented detective in her own right. Enola has now opened her own detective agency, no mean feat for a young woman in Victorian London. Her first case, the disappearance of a matchstick girl, grows into a conspiracy that threatens the nation itself. Cavill returns, as does Helena Bonham Carter playing Helena Bonham Carter the Holmes’s mother, Eudoria.