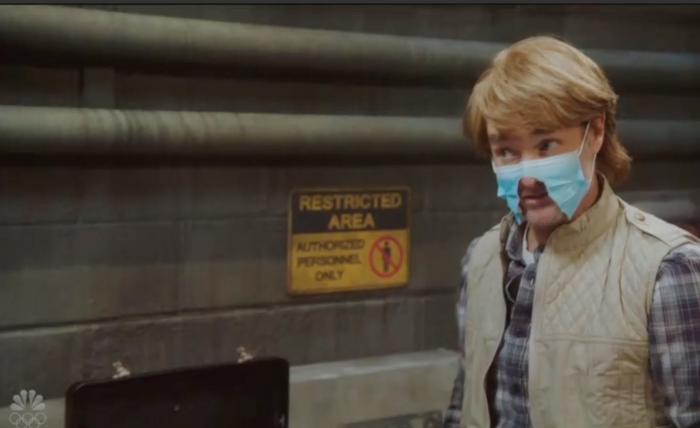 The Laura Ingraham Show — Kate McKinnon does the Ingraham honors again, and Aidy Bryant does her Ted Cruz, where she apologizes again for calling the insurrectionists terrorists. Pete Davidson plays Novak Djokovic. Ego Nwodin plays Candace Owens, Laura’s “one Black friend”. The Trump guy shows up, too. As usual, the low-rent sponsors are the best part of this The Laura Ingraham Show, which is not saying much this week (Paula Deen’s Chickpea Mash, notwithstanding). (Watch Here) (Score: 4 out of 10, minus 1 point for doing Wordle wrong).

Will Forte — It’s his first time to host SNL? Huh. Forte is really excited to be here — basically, the last major cast member from his cast to host. “I’m not bitter about it!” “After 12 long years, it’s finally time for me to shine,” he says before Kristen Wiig hijacks his monologue. When he finally gets a stretch to speak, he gets played off by the band, before Willem Dafoe makes a cameo. Good stuff. (Score: 6.5 out of 10)

MacGruber — MacGruber is back! And he’s anti-vax, and he’s fallen into an alt-right rabbit hole and now he’s QAnon. We’re just partial to giant explosions at the end of skits. (Score: 7 out of 10)

Kid Klash — It’s some sort of Nickelodeon series. Aidy Bryant is searching frantically through some thick cream to find a flag — she can’t find it and the host (Will Forte) mocks and berates her. Very stupid, but funny in a Mat skit of the week sort of way. (Score: 6.5 out of 10)

Cinema Classics — It’s Gaslight, the movie whence the phrase came. This is usually a skit where Kate McKinnon makes the host break, but no such luck here. (Watch Here) (Score: 4 out of 10)

Weekend Update — Bowen Yang plays Chen Biao, the guy in charge of the Olympic Games, who comes on to discuss NBC refusing to send correspondents. Yang is a delight, and so is that The Wire season 2 joke. Sarah Sherman appears to talk about the winter, but mostly to mock Colin Jost. Plus, Alex Moffat’s “The Guy Who Just Bought a Boat” is here to discuss the NFL playoffs, along with Pete — who just bought a Staten Island Ferry with Jost and therefore is also a Guy Who Just Bought a Boat. Davidson cannot keep it together. “Update” runs forever this week (nearly 20 minutes), but it’s decent. (Score: 7 out of 10)

Jackie and Clancy — Will Forte and Kristen Wiig sing songs, and Kenan is there, too, in what feels like a skit straight out of 2008 SNL. Not a good one, mind you. I love Forte, but I’m also realizing that his brand of absurdity may have paved the way for Kyle Mooney. That is not a compliment. Forte and Wiig are fantastic together, all the same. (Watch Here) (Score: 3 out of 10)


← What to Stream This Weekend | 5 Shows After Dark: 'Billions' Season 6 Premiere on Showtime, 'Euphoria' on HBO →