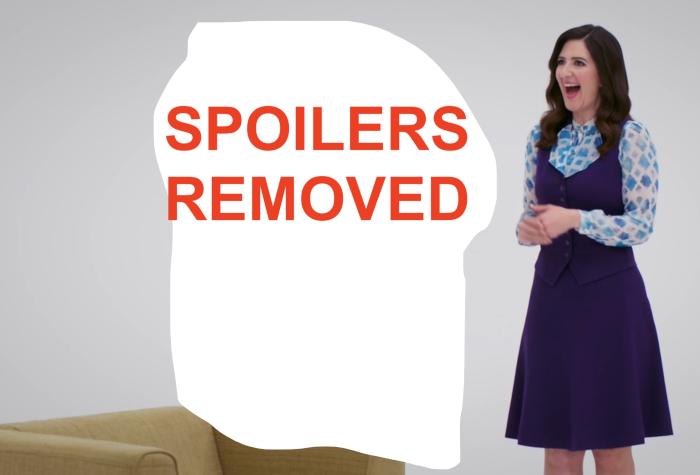 'The Good Place' Is Back And OH FORK THEY REALLY GOT [SPOILER] TO SHOW UP?

Welcome! Everything is a fifty-gallon man in a ten-gallon hat.

We’re nearing the end now. With only a few episodes left before we reach the conclusion of The Good Place, they certainly aren’t holding anything back at this point. Which is why this episode, which was essentially about trying to convince one person (but not, it turns out, THAT person) to keep the universe from being rebooted, was still full of a ton of absurd hidden gags, that, as usual, we’ll go through now. 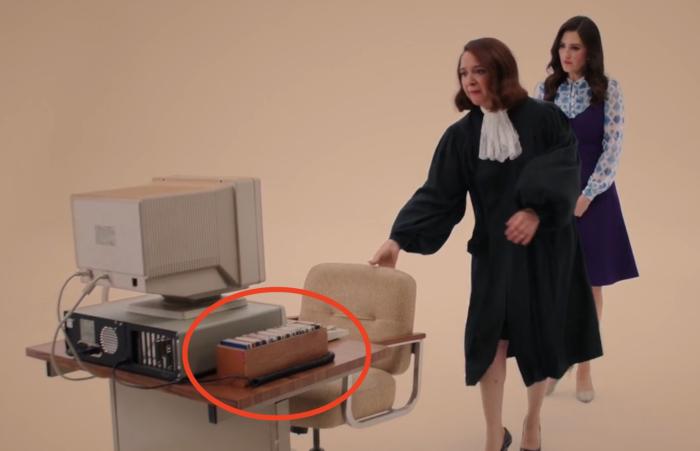 When Gen the Judge and Janet went into Neutral Janet’s void, naturally her computing system looks like it comes from the 1980s, complete with beige-on-beige design and a box full of floppy disks.

For the youth, those disks were used as portable storage, so you could take things from one computer to the next, but only if they were properly formatted to work with the same type of computer. Also, you couldn’t put them anywhere near a magnet. Imagine if you had a usb key that could hold less than one selfie and made noises like RRRGGHHWHIRRR every time you wanted to look at that selfie. I kind of miss them. 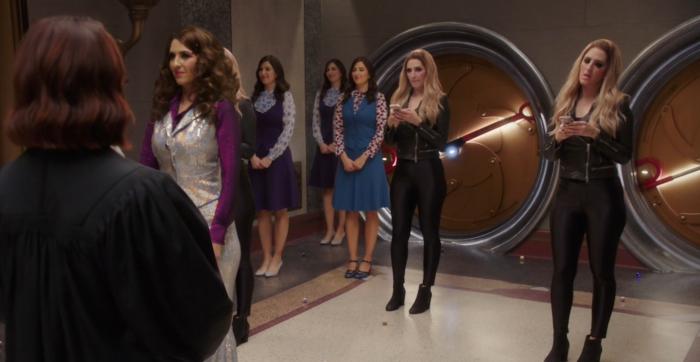 Does anyone still use The Club (other than my elderly neighbor, whose 1994 Honda Accord doesn’t run well enough to be stolen)? The Judge does, apparently, as she’s using special versions of them to prevent more Janets from coming through the portals.

Bad Janet’s void! So much to see, so little time…

This one will have to be a quick rundown, because we’ve got so many things to see… 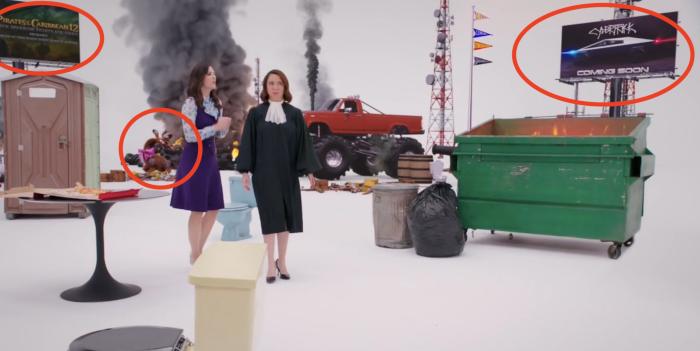 - A billboard for: Pirates of the Caribbean Twelve: Jack Sparrow Fights Aquaman Probably (I Mean At This Point What Does It Matter)

- A billboard for Elon Musk’s Cybertruck!

- Also, they’re too tiny to read and I forgot to circle them, but three of the four bad teams according to Bad Janet’s banners: the Lakers, the Yankees, and USC (I couldn’t read the fourth one). 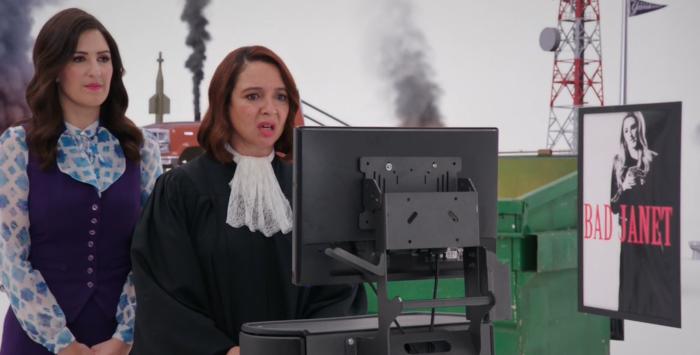 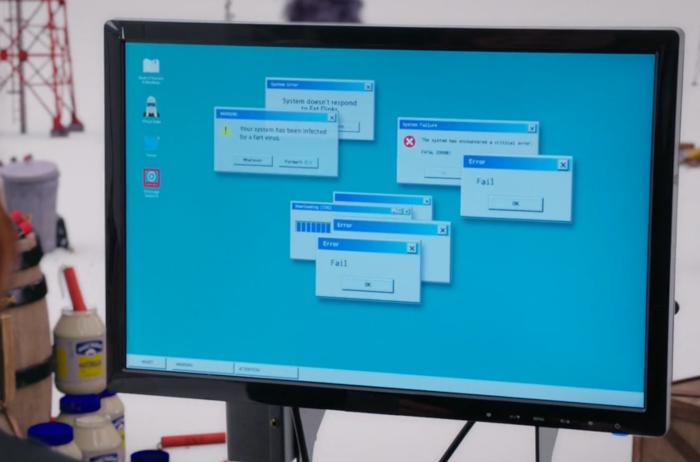 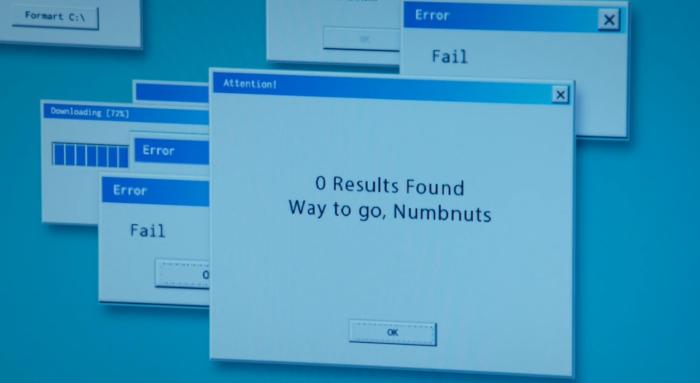 - Then we come to Bad Janet’s computer, which is of course built on Windows 95, calls the user a Fat Dink and Numbnuts, and is infected by a fart virus.

- Also for some reason, ‘format’ is instead ‘formart’, which is either a typo or something I don’t get. Does anyone get that one?

Naturally, without a home computer for Disco Janet to use as her system, her processing is built around an 8-track player.

Once more for the youths: 8-track was a format used to store audio, and was replaced by cassettes.

Cassettes were these small little tapes that used to get stuck and unwound, which is why we replaced them with CDs.

CDs were these flat cylindrical discs that could store like 15 whole songs, but then we all decided we’d just rather have all of it in MP3s.

MP3s were those files we’d put on our iPods.

iPods were like if your iPhone was just for music.

Vinyl, however, remains unchanged, as the domain of the hipster. 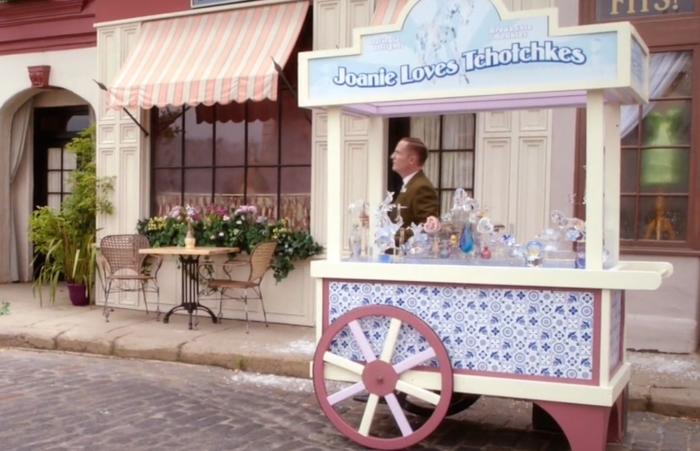 Even this late in the game, the show still manages to throw in another punny shop.

Okay, you’ve all behaved yourselves, so now we can finally get to the week’s special guest star: 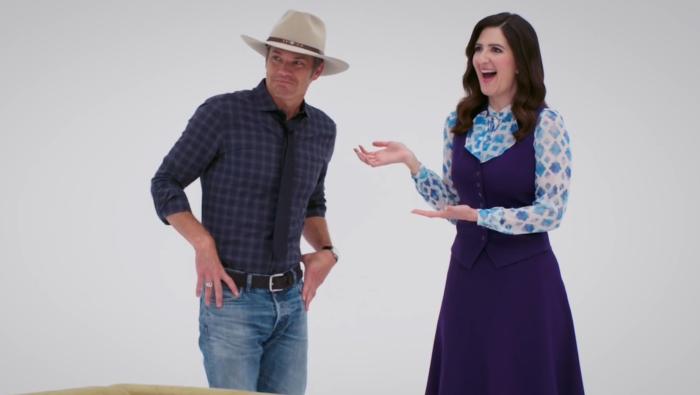 Yes, after a number of jokes about Justified (which go back at least a couple episodes, when The Judge was shown to have season two on DVD in her bag), Janet realizes the best way to stall The Judge is to let her have a little eye candy in Timothy Olyphant, playing himself(ish), but dressed as Raylan Givens.

But the best part? Since he doesn’t have a dog in this fight (his words), he’s free to ask questions… a LOT of questions, which also leads to this perfect moment of exasperation from Eleanor: 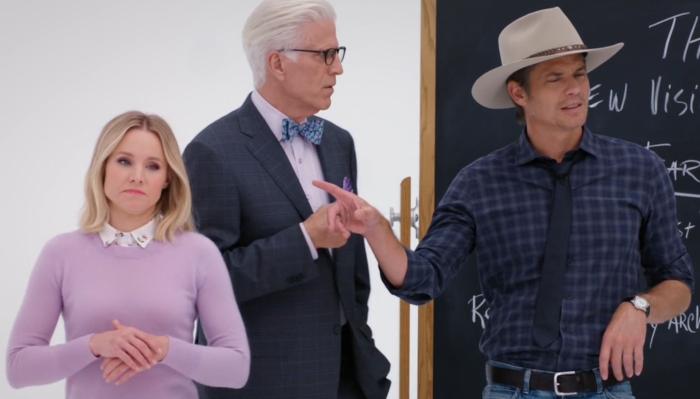 So that’s the question, isn’t it? At the end of the episode, the question left isn’t a big existential, will-they-save-the-universe one, because it seems like… well, they’ve accomplished that!

(Shawn’s emotional breakthrough, incidentally, was so lovely, thanks to Marc Evan Jackson, who really had a chance to shine tonight, going from snarky and evil to exasperated to bitchy to, finally, hurt, as he realized he was about to lose something he loved - fighting Michael.)

With three weeks left, and now the show shifting into a final quest of “how do we actually build a new system?” mode, it seems like there will be, hopefully, enough time and runway to answer all the REAL questions we have left, which are inevitably about who will get their happy ending (all of them, hopefully, given that this is Mike Schur) and more importantly, how (probably not without some kind of grand sacrifice or realization that they still won’t get everything they want, even now that they’ve won), all while making us laugh for a few more weeks.

I don’t know how they’re going to do any of it. But then again, don’t look at me, I’m just the idea guy.