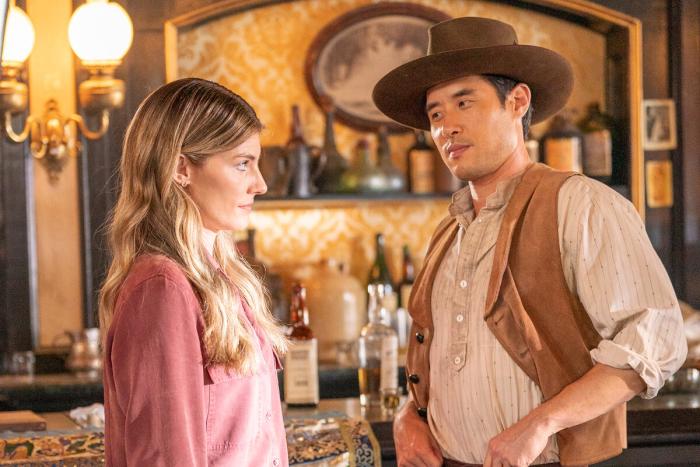 In last night’s episode of Quantum Leap, after Dr. Ben Song has righted a wrong in a town in the 1879 Old West, he asks if the town of Salvation will survive. The wrong has been righted, but the town still needs money to survive to avoid being taken over by the railroad. Thankfully, Ziggy — the supercomputer that runs the Quantum Leap project that a hologram can access with a handheld device from any time period — informs Ben that there’s a copper mine nearby. Ben informs the townspeople in 1879 of the copper mine, and within seconds, Ziggy can tell Ben that the town not only survives but flourishes.

Pretty cool trick, huh? But the thing about Ziggy is that — while it can leap a person through space and time and into the body of another person, and while it can provide immediate information to someone in the past who can use that information to instantaneously change the future — Ziggy never f***ing works when it’s needed the most. Need Ziggy to confirm that happy ending for you? The supercomputer is all over it! But if Ben Song (or Sam Beckett) needs to know if the drink they’re about to consume is full of poison, well, Ziggy is “on the fritz.” Ziggy can do “a trillion floating-point calculations at once,” but if there’s a little cloud cover in 1987, Ziggy is suddenly f**king useless.

Twenty-five years later, and they still haven’t fixed the damn bugs. Ziggy is the most powerful computer on the planet, unless the plot needs a contrivance to keep it going then watch out! Ziggy is being difficult! Every single episode, whenever Ziggy is needed most, it goes down because of some weird issue — fog, a power surge, someone spilled a bottle of Hennessy on it — that someone at some point should probably have fixed by now!

Otherwise, for the curious, Quantum Leap — the first new series of the year to get a full season order — has settled in quite nicely after an iffy pilot episode. It no longer spends too much time in the control room, and what time it does spend there is more interesting now. What they have discovered, so far, is that Ben had been working with Al’s daughter (who is MIA now) and that Ben had a plan when he unexpectedly jumped into the Quantum accelerator: He’s trying to leap into a certain place at a certain time, which will allow him to find Dr. Beckett. In theory.

In the meantime, Ben has regained a few memories, specifically he now knows that his hologram assistant, Addison, is his fiancée. He doesn’t remember why he jumped into the Quantum accelerator yet. Through Ernie Hudson’s character, Magic — a character on the first iteration of Quantum Leap — we also got a firsthand account of what it’s like to have your body leaped into. Basically, Magic felt a nudge, he “let” Sam in, he blacked out, and when he woke up, he was a hero with no memory of saving his entire platoon in Vietnam.

There are also apparently fewer time restrictions on the jumps. While Sam Beckett could only jump around in his own lifetime, Dr. Ben Song can jump beyond that — in fact, he made a leap to 1879 this week — but by doing so, he runs afoul of the government watchdogs overseeing the project. No matter: Magic told the watchdog Congresswoman that if she didn’t shut down the Quantum Leap project, he’d figure out how to send Ben song back 10 years to save her brother’s life (this was a lie).

That’s the series mythology we’ve gained, so far, but expect more soon. In this week’s episode, before Ben makes his next leap, he encounters someone in 1879 who knows him … as Ben Song. And he’s pissed about it. We may be looking at an Evil Leaper. Or maybe it’s a leaper who is looking out for Ben. Who knows?

What is interesting is that this episode doesn’t end with a glimpse at Ben’s next leap. That may be because the next episode — episode 6 — was actually shot as the show’s original pilot. However, when Martin Gero took over as the new showrunner, he wrote another pilot and moved the original premiere episode to number six, suggesting that the pilot episode wasn’t a flashy enough leap for a premiere. I guess he didn’t bother to film a preview for the end of episode five.

I’ll say this, though. Based on the preview, episode 6 sure seems like a flashier episode than the original’s heist.