When it comes to ratings, it’s rare that TV shows get an uptick in viewership. Killing Eve was the rare exception where every episode improved on the ratings of its predecessor. Recently, Nielsen, which measures television viewership — live, DVR, video on demand, etc. — released the ratings for Season 3 of Amazon’s The Marvelous Mrs. Maisel and the award-winning series increased by 60% since Season 2. Wow.

According to Nielsen, Season 3 saw an average minute audience (which is basically an average audience) of 3.2 million viewers tune into the show during its first week of release. The season’s first episode garnered around 2.1 million viewers, with 606,000 tuning into watch the episode on its release day of December 6.

Of course, it’s best to remember that Amazon, like Netflix, measures viewership differently than traditional broadcast networks. If it wasn’t for Nielsen, Amazon probably wouldn’t bother telling the public how many people are watching their original shows.

Was this Sterling K. Brown’s magic at work? Did his appearance in Season 3 boost viewership? As much as I’d like to think that his guest-starring role boosted ratings for The Marvelous Mrs. Maisel, there’s nothing to specifically pinpoint what it was about the show’s third season that drew people to watch it. Perhaps it was all the awards buzz the Amazon original has gotten and viewers thought to binge the first two seasons ahead of Season 3, boosting its numbers. But, in all seriousness, it’s tough to assess.

Check out Nielsen’s viewership breakdown of the season below (courtesy of TheWrap). 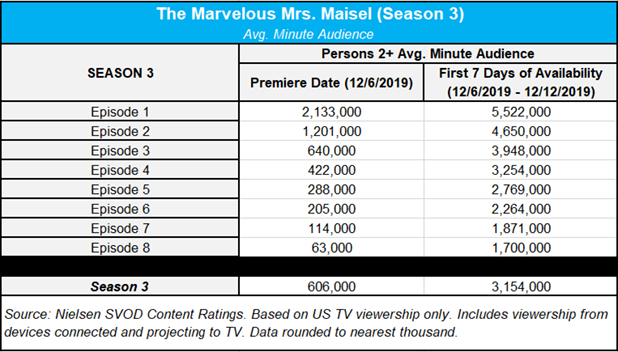 ← 'Doctor Who' 'Orphan 55' Recap: This Show Has Lost All Its Mojo | Priyanka Chopra Jonas and Richard Madden Will Lead Amazon's 'Citadel' and That's Unexpected →