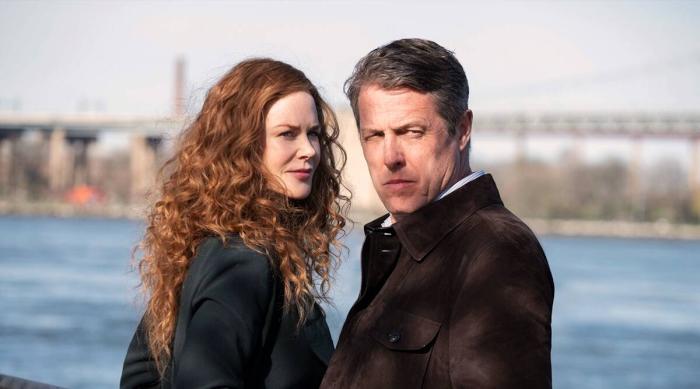 It’s week two, and here’s what we have learned from the second episode of HBO’s The Undoing:

— Jonathan Fraser (Hugh Grant) — missing for most of the episode — was fired three months prior over allegations leveled against him by the murder victim, Elena Alves. Jonathan knew Elena, it turns out, because her son was a patient of his. In fact, it was Jonathan who helped Elena get her kid, Miguel, into Reardon.

— Sylvia (Lily Rabe) knew about the disciplinary hearing against Jonathan because he’d hired her to represent him. She told Grace that there was plenty of evidence to get him fired, but that Jonathan had told her the case had gone away. That clearly wasn’t true. Sylvia never told Grace because of attorney-client confidentiality.

— Jonathan may or may not be the father to Elena’s newborn.

— Grace had no idea that Jonathan had been fired, nor that he was having an affair with Elena. Long after it was reasonable to believe so, she still thought Jonathan was at a medical conference.

— At the end of the episode, Grace and their son, Henry, go to the family beach house to hide from the media. They soon discover that is where Jonathan is also hiding. Before Grace calls 911 to have Jonathan arrested, he confesses to her that he did have a long affair with Elena and that he got her son into Reardon. He got lost in his affair with Elena, which cost him his job, although Jonathan claims that he was going to call it off because Elena also got obsessed with Grace and furthered that obsession by joining Grace’s gym and the auction committee at Reardon.

Jonathan claims that, after the auction, he went to confront Elena about her obsession with Grace, they got into a fight, and then they had sex. Ahem. He then left to clear his head, went to a bar, and returned to find Elena had been murdered. Jonathan, in turn, came home, had sex with his wife, then woke up at 5 a.m., and ran away, all perfectly in line behavior for an innocent man.

I have not read You Should Have Known by Jean Hanff Korelitz, so there are no intentional spoilers below. We’re just gonna speculate about who the murderer is each week.

Jonathan Fraser (Hugh Grant) — Jonathan is the most obvious suspect because he had motive (he might have been the father to her infant), opportunity (he slept with her soon before she was murdered), and he certainly had the means, which — at this point — makes him the least likely killer. Otherwise, what will the next four episodes be about, except a trial that ultimately convicts Jonathan, which feels like a very uninteresting series. (Odds: 10-1)

Fernando Alves (Ismael Cruz Córdova) — He’s Elena’s husband and, as Sylvia says, “It’s always the f**king husband.” And why not? The husband certainly has a motive, especially if he knew Elena was having an affair and that their baby was fathered by another man. Still, this is not an interesting enough outcome for which to greenlight an HBO series. (Odds: 8-1)

Henry Fraser (Noah Jupe) — Henry clearly knows more than he’s let on, but I don’t think he’s a skilled enough liar to act casually after murdering an adult woman. Also, he may have wanted to murder Elena because she was homewrecking his happy family, but that would have assumed that Henry was capable of leaving his house in the middle of the night, traveling to Elena’s studio, and murdering her violently. That seems unlikely for a young teenager. (Odd: 20-1)

Sylvia Steinetz (Lily Rabe) — I have no idea why Sylvia would kill Elena unless maybe she was also sleeping with Jonathan and she was jealous.

Sally Morrison (Janel Moloney) — Sally has no clear motive, either, which makes her the intriguing longshot. (Odds: 20-1)

Grace Fraser (Nicole Kidman) — What if Grace knew about the affair, and knew that her husband lost his job, and she felt so humiliated that she concocted some sort of Gone Girl-like frame-up job as revenge on her husband? This honestly makes the most sense to me at the moment. Plus, David E. Kelley is writing the series, and I think I’ve probably seen this episode of Boston Legal. (Odds: 2-1)

← F**k Kendall Jenner | 5 Shows After Dark: 'The Good Doctor' Season 4 Premiere, 'We Are Who We Are' First Season Finale →