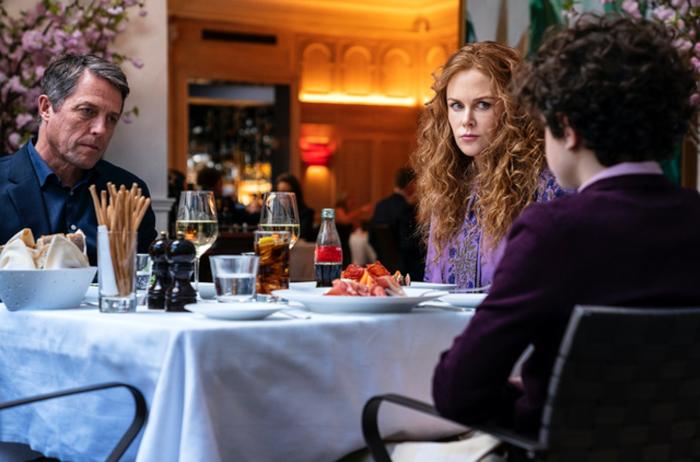 Henry Fraser — Henry began the season as maybe the most likely suspect — because why else cast one of the best child actors around in Noah Jupe? — but I admit that my focus turned elsewhere. However, last week, I moved him from 30-1 odds to 15-1 odds after the way he handled the “accidental” run-in with Miguel and manipulated his grandfather into threatening the headmaster of Reardon, both actions that evidenced a touch of the old sociopathy. Those odds are moving up considerably again this week, knowing now that Henry saw his father with Elena, that he’s aggressively invested in keeping the family together (as evidenced by his behavior at the dinner table), and, oh, Grace found the murder weapon — a sculpting hammer — under his bed.

What I’m wondering, at this point, is if the sculpting hammer under the bed transforms The Undoing from a mystery about who killed Elena Alves into a different story now, about a parent trying to protect her son? Would Grace throw Jonathan under the bus to save her son’s life? The preview for the finale doesn’t exactly hint at that, but I’m not going to dismiss it, either.

But here’s another intriguing (though unlikely) possibility: What if Henry conspired to kill Elena with Elena’s son, Miguel? What if the two knew their parents were cheating with each other, and they decided to punish them both? What if Henry is hiding the murder weapon for his secret friend Miguel? (Odds: 5-1)

Jonathan Fraser — By the end of the episode, after Grace learned that Jonathan’s four-year-old sister died under his care, and that — according to Jonathan’s mother — he expressed neither guilt nor regret, we all began to wonder if the reason he is so convincing at pretending to be innocent is that he is a sociopath himself. That felt very likely until Grace pulled the sculpting hammer out from under Henry’s bed, and now I just don’t know. Jonathan would never frame his own son, would he? Then again, if he’s enough of a sociopath to feel no remorse over the death of his sister, maybe he’d have no problem framing his own son for a murder he committed? Also, that story about his four-year-old sister running out into traffic gave me nightmares — it hit me exactly where my biggest anxieties lie. (Odds: 5-1)

Grace Fraser — I’m not saying that The Undoing has been a great TV show (it’s hasn’t been, but it has been a welcome distraction), but I will give it this much credit: Heading into the season finale, I’m equally convinced that either Henry, Jonathan, or Grace could have killed Elena. Grace has too many weird flashbacks of Elena to rule out a dissociative disorder, and we can’t rule out that Henry hid the sculpting hammer to protect his own mother, either. I mean, she was walking near the murder scene, she has motive, and opportunity, and means, and Henry is very protective of his parents. Hayley was 100 percent in her rights to ask Detective Joe why he never treated Grace as a suspect. She should be, and so should Fernando. (Odds: 5-1)

Fernando Alves — He has a temper. He has motive, means, and opportunity. Again, in a traditional investigation, Fernando is suspect number one. On a David E. Kelley TV show, he’s too obvious. (Odds: 10-1)

Franklin Reinhardt — The sculpting hammer being beneath Henry’s bed really does seem to rule out Franklin once and for all. He was a nice red herring, but he’d never frame his grandson. Thank you for playing. (Odds: 50-1)

Sylvia Steinetz — What is going on here? Did they really waste Lily Rabe by casting her as little more than a sounding board for other characters? Why does she appear in only a scene or two in each episode? Either she’s somehow involved, or the casting people have no idea what they’re doing. (Odds: 10-1)