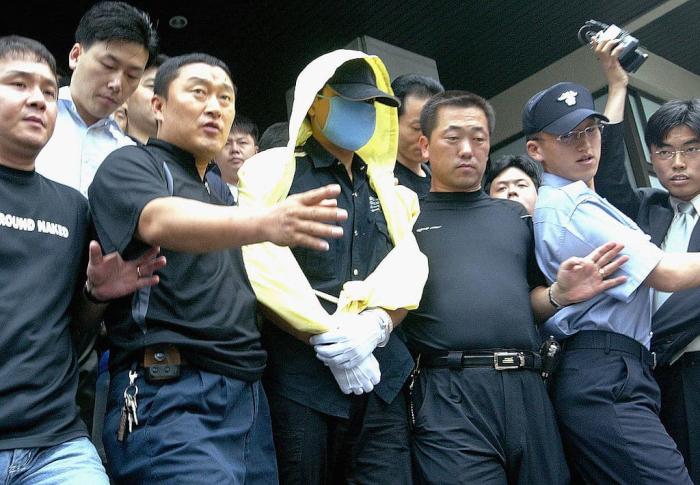 Netflix has released yet another true-crime documentary this month, this time pertaining to one of the most infamous serial killings in South Korean history. The Raincoat Killer: Chasing a Predator in Korea is a three-part series focused on the crimes of Yoo Young-chul, who was convicted of 20 murders committed between September 2003 and July 2004.

Over a two-month period between September and November 2003, several wealthy senior citizens were murdered in their homes in what looked like robberies gone wrong. However, no money or valuables were taken from the scene. Initially hesitant to connect the killings to one another, the Seoul authorities eventually found matching shoe prints at the scenes, and the specter of a serial murderer soon took over the nation. As the police and media attention increased, the murders took a different direction. Instead, young female sex workers were targeted and often not reported missing due to the taboo of their profession. After his arrest, Yoo confessed to bludgeoning his victims to death after having sex with them, then dismembering and mutilating their bodies. He later buried their remains in the mountains behind the Bongwon Temple.

Yoo Young-chul, a 44-year-old, confessed to at least 26 killings during initial interrogations, while rumors swirled that he may have been connected to other killings in the area. Later, Yoo further confessed to eating some of his victims’ flesh, although no evidence was given to substantiate his claims. While Yoo confessed at length to the murders, the police initially struggled to find physical evidence linking him to the victims. They eventually found DNA evidence on the hammer that he used to bludgeon his targets. When asked by the media what his motives were, he said, “Women shouldn’t be sluts, and the rich should know what they’ve done.”

On December 13, 2004, Yoo was sentenced to death for 20 counts of murder. Yoo reportedly thanked the prosecutors for choosing the death penalty. Yoo is currently detained at the Seoul Detention Center. His case inspired serious conversations throughout South Korea over the issue of capital punishment. There has been an unofficial moratorium on executions in the country since 1998, although several high-profile criminals remain on death row.

The Raincoat Killer follows a similar trajectory to many Netflix true-crime series. As we’ve discussed before, this genre has become increasingly treacherous, a narrative prone to giddy sleaze under the guise of journalistic seriousness. At this point in time, I feel like it may be more efficient if I made a Netflix True Crime Bingo Card for my reviews. Eerie music? Check. Crisp cinematography probably better suited to a perfume ad than an investigation into a serial killer? Check. Occasionally questionable focus on motivations that veer into ‘we live in a society’ territory? Double check. The Raincoat Killer, of course, has crime scene photos, as well as recreations of the investigation and moments of Yoo walking sinisterly, just in case you didn’t think he was monstrous enough. When you’re this wearily familiar with the bag of tropes consistently plundered by the genre, you’re forced to focus on the quieter moments for much-needed narrative differences, as well as an eager hunt for empathy. What can I say? My guard is always up with true crime these days (hello and f**k you, What Happened, Brittany Murphy?)

Much of the story of The Raincoat Killer — and its most compelling elements — focuses on the rampant police corruption and ineptitude on display. Bribery is rampant while many officers use pimps as informants with no consideration for the safety of the women under their control. At one point, Yoo escaped police custody and was on the run for around twelve hours. Several officers tried to cover up their mistake via a falsely written report claiming he had been released. The officer who signed that report makes a comment about how there’s a difference between active corruption and an ‘honest mistake’, a claim that rings laughably hollow given the number of deaths involved.

Less convincing are the moments in the first episode where parallels are poorly drawn between Yoo’s motivation of resentment of the rich and the growing societal discontent towards South Korea’s growing wealth gap. At this point in the series, Yoo’s misogyny and targeting of sex workers had not come up, so this strange framing of him as an almost Joker-esque figure - not supportive of his abuses but trying to position them as part of a wider nationwide emotional force - is premature and misguided. A lot of true crime stumbles when it tries to pathologize its criminals in ways that make them far more alluring than they ever were or deserved to be. The Raincoat Killer cannot help but give in to this urge now and then, especially as it leans in hard on its crime-thriller recreations that reek of wannabe David Fincher. Far more time is given to Yoo and the mixed personalities of the police than the victims, a fatal failing of the series as a whole.

If you plan to watch The Raincoat Killer, I recommend that you do so in the original Korean audio with subtitles. I understand the accessibility offered by an English-language dub and Netflix has done some solid ones for foreign-language programming lately, but this one feels so slapdash. Everyone sounds like they’re doing a cheap anime dub for an early ’90s kids’ series. One police officer is given a voice like a Dragonball Z villain in the midst of a hernia. The tone cannot help but be skewed into something more melodramatic and salacious as a result, which is a real shame. Compare this to House of Secrets, another true crime release from this month, which featured smartly chosen actors for the dub and proved far less distracting a viewing experience. It probably helped that that show kept the Indian accents in the English-language dub. Everyone in The Raincoat Killer is American and enunciating for the cheap seats.

While undoubtedly a fascinating case, The Raincoat Killer’s focus does not to the seriousness of the Yoo investigation justice, nor does it account for the sheer emotional depths of the pain caused by this murderer. True crime should feel like justice, a dissection of the full context, not a Wikipedia summary-style rehash of key events. It feels like a lot is missing here, from the wider cultural perspective to the extent of police corruption to the impact of whorephobia. If nobody involved wants to talk about the tough topics then we have to wonder what the point of it all is.

The Raincoat Killer: Chasing a Predator in Korea is available to watch now on Netflix.

← [Spoilers] 'You' Season Three on Netflix Got Its Ending All Wrong | Who Kills Simon in 'One Of Us is Lying'? Will There Be a Second Season? →