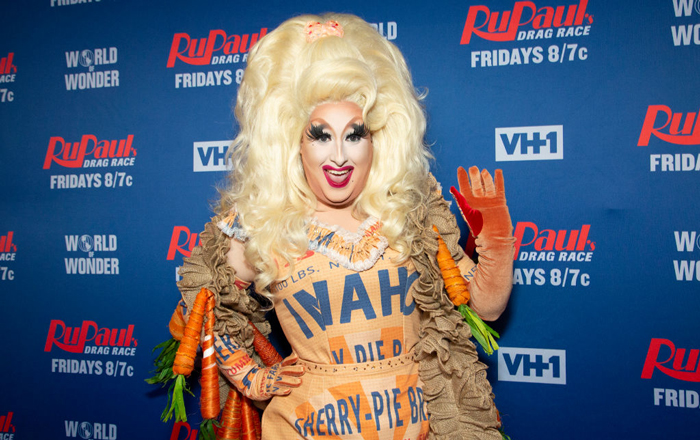 RuPaul’s Drag Race Season 12 is facing an ongoing PR nightmare thanks to Sherry Pie. With allegations of sexual misconduct against the contestant surfacing after the season premiere, the producers announced that Sherry was disqualified and would not appear in the yet-to-be shot grand finale. However, the season would be aired as planned “out of respect for the hard work of the other queens.” From there, fans wondered if unaired episodes would be recut to trim out the disgraced drag queen. Friday night’s “Snatch Game” showed just how severe these cuts have become.

In her premiere ep, Sherry Pie got a lot of screentime between reaction shots and confessional footage. A bombastic personality, she’s been getting good critiques from the judges, even scoring wins in episodes 3 and 5. She seemed sure to slay on the show’s always anticipated Snatch Game challenge, in which queens are asked to improvise as a celebrity of their choice in a Match Game scenario. However, the confessed catfisher was noticeably absent from the workroom sequences and only shown briefly during the game itself. Plus, none of her confessional footage was included. Yet, the most shocking chop came in the show’s final minutes.

Typically, every contestant is shown walking the runway to showcase their look, along with their charisma, nerve, uniqueness, and talent. So Drag Race fans were shocked when Sherry Pie’s walk for the “Frozen Eleganza” challenge was completely cut.

the #DragRace editor deleting sherry pie from the runway pic.twitter.com/ePrebAx1iT

Trying to find Sherry Pie in the runway #DragRace pic.twitter.com/lA9HRd11Zj

#DragRace producers did a damn good job editing out everything Sherry Pie. I couldn’t even find her ass in the background pic.twitter.com/W2jNmC1nPu

they got rid of every single sherry pie confessional lmao #DragRace pic.twitter.com/X0xlxFX8P3

They Showed Sherry Pie Face For One Second And The Camera Man Said …… #dragrace pic.twitter.com/YyoU34DIhw

Some felt the edit was still too generous to Sherry Pie.

The inconsistency with @RuPaulsDragRace ‘s editing out of #SherryPie is too much, to cut her 100% from the runway but keeping her in #SnatchGame and the episode benefiting from her performance just doesn’t seem right, surely it should be all or nothing!? #rupaul #DragRace12

While others pointed that cutting her runway wasn’t fair to the designer who put work into a gown with the expectation of seeing it on TV.

@RuPaulsDragRace I can't believe u would cut out a queer designer of a simply STUNNING look just because Sherry Pie was disqualified! Shame on you!

Ok here is my problem with #RupaulsDragRaceSeason12 not showing #sherrypie 's runway look.

There are fucking designers that worked hard on her looks. Punishing them for her faults is unfair. Even if she did the look herself, ruining the flow of the show is necessary.

fuck sherry pie but…. that runway look was probably my favorite of all time. that designer is amazing. #RupaulsDragRaceSeason12

I think it's horrible that @WorldOfWonder and @RuPaulsDragRace have cut out Sherry Pie's runway looks. We all know what happened. We read the disclaimer. We're all adults.

Don't rob talented designers (who did tons of work for v little pay) of *their* chance to shine. #DragRace

Category is: Frozen ELEGANZA! ⛄️ Whose icy lewk was your favorite? ❄️ #DragRace

Those who collaborated with Sherry Pie for her RuPaul’s Drag Race looks would have done so long before the allegations were made public. As such, fans of the show and fashion are defending these unknown designers and what should be their moment.

The designer of Sherry Pie’s “Frozen Eleganza” look was Florence D’Lee, who posted a sketch and some pics of the final product on Instagram.

Category is “Frozen Eleganza” on the runway! Custom Mrs.Freeze fantasy stoned to the gods from head to toe. Feeling chilly anyone?! ⚜️ DISCLAIMER! In NO WAY do I condone or support the actions of Sherry Pie. I am here to spotlight and show off my design work that I poured my heart and soul into this past summer. ⚜️ Photography by @thegingerb3ardmen Cane by @kandytrip ⚜️ #nyc #fashionable #gaynyc #gay #instagay #nycdrag #dragqueen #nycdragqueen #dragperfection #frozen #fashionblog #beauty #fashionblogger #queen #drag #instabeauty #instaglam #fashion #ice #instadrag #dragqueen #fashiondesigner #snow #fashiongram #fashionista #rupaulsdragrace #fashion #freeze #instagay

From the looks of this tweet the day after the Snatch Game episode aired, D’Lee was heartbroken by the omission.

← What is the Actual Science Behind Hydroxychloroquine? | 5 Shows After Dark: 'Manifest' Season Two Finale on NBC, 'Who Wants to be a Millionaire' on ABC →