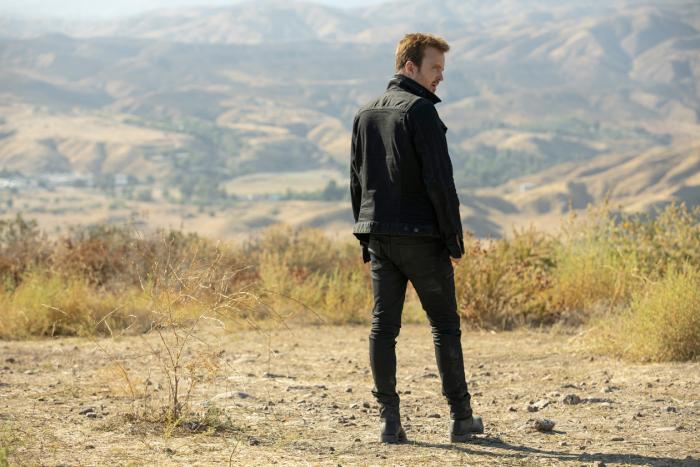 At some point during last night’s penultimate episode of Westworld’s third season it dawned on me that… I don’t actually care about what anybody is really fighting for anymore. This season is supposed to be the start of A REVOLUTION, with battle lines drawn. Serac is saving humanity from itself! Dolores is trying to save the Host-bots from extinction! Maeve is fighting mostly because she doesn’t trust anybody else to do it right, and for her daughter, or something! Cal is a pawn, or a leader, or maybe both! Humans and Hosts have a lot in common, in how they’ve been reprogrammed and manipulated, but also they have almost nothing in common, and the problem is that I can’t tell if I’m supposed to pick sides or care about the future of both races, or hope they both die and aliens show up. Mostly though, I’m not convinced that all of this requires a battle at all. Once you brush away all the plans within plans and elaborate machinations, it doesn’t seem like these factions actually need to be in opposition — though I suppose a season where they all just talked it out calmly would be a lot less exciting (and have fewer opportunities for sword battles).

Unfortunately, it’s nearly impossible to brush aside the convoluted plans, since that’s what the show has clung to in exchange for the timeline shenanigans of previous seasons. Which is how we wound up with last night’s installment, which confirmed a thing we already knew (Cal’s memories are LIES!), added another Incite computer to contend with, and introduced the surviving members of Maeve’s new army (RIP Hector). The plans got denser, the plot moved barely an inch, and apparently we’re getting a whole ‘nother season of this ish!

That Cold Open Though
The episode shot its wad early, with an opening sequence that I could have watched for a solid 60 minutes all on its own. Crispy Charlotte has gotten slightly less crispy somehow, but more importantly, she’s decided to exact her revenge by sabotaging Main Dolores and is now apparently helping Maeve’s faction. She leaked the location of the Musashi-Dolores, which leads to a big confrontation in Jakarta. Only Maeve doesn’t show up personally, since she’s got freshly-built allies to do that for her now. Namely: Clementine and Hanaryo! You remember Hanaryo, the Shogun World version of Armistice, and partner to Musashi (who was the Shogun World version of Hector)? Anyway, she’s very much NOT PLEASED to see Dolores parading around in Musashi’s image, and takes her feelings out on him… by taking his head. So now Maeve’s faction has a Dolores pearl in their possession, and a rogue Dolores (Charlotte) on their side. For those keeping score, that means that only Main Dolores and the heretofore unrevealed Secret Berlin Dolores are left (since Connells blew up and/or was salvaged by Serac).

It’s also worth noting that when Dolores had the opportunity to choose allies, she only chose herself, while Maeve chose strong, independent Hosts to bring out on her side. On the one hand, perhaps Dolores knew that sacrifices would be necessary, and didn’t want to sacrifice anyone other than herself. However, it’s not a great look to be fighting for freedom while denying that freedom to those copies that are enslaved to her plan. Also, it doesn’t seem to be panning out too well for her in the long run, just sayin’.

Solomon’s Strategy, And Cal’s Purpose
Apparently the penultimate episode of the season is the perfect time to introduce a whole other plot device supercomputer: Rehoboam’s insane AI predecessor, Solomon. What makes this predictive program different from the other one? Well, for starters it was the one that Serac’s schizophrenic brother was working with before he got fridged — and no, I don’t mean killed, I mean literally locked in deep freeze in a Mexican people-cooler. Let me backtrack: Dolores and Cal follow the coordinates she was able to hack from Incite thanks to the tracker virus she (Charlotte) injected in William, and locate Serac’s hidden facility in Sonora, Mexico. Dolores is there to find Solomon, but Cal realizes he’s been there before — and that he, as we suspected, is one of the early test cases of Serac’s outlier reconditioning therapy. There’s a lot of flashbacks to wade through, but basically Cal didn’t lose his friend Francis in the war — he killed Francis himself, after they both returned from the military as outliers and were reprogrammed. In fact, that criminal app we saw Cal using? That’s part of Serac’s whole system, offering reprogrammed outliers assignments to capture other outliers and bring them in for taming.

(Enrico Colantoni was one such outlier — he worked for the pharmaceutical company that makes the Limbic drugs that help keep the tamed outliers so docile. He started asking too many questions, which is why Cal and Francis were assigned to capture him, only Cal made the mistake of talking to him, and that’s when everything went pear shaped. In the end, Cal shot both Francis AND Keith Mars, and then had his memory reconditioned — reframing the incident as something that happened during his military stint. He must have retained some impression of what he learned, though, because we’ve seen him avoid taking those Limbic tabs since.)

The thing is, though, that the reconditioning only works in one out of every ten cases. Cal was a lucky one. As for the unlucky other nine? They get frozen in that cooler I mentioned, awaiting the day Serac could acquire the improved genetic data (from Delos) he needed to make those outliers better. The reason he kept them on ice instead of killing them is because, as we already know, his brother Jean Mi was also an outlier — and Serac still held out hope of rehabilitating him to fit into this perfect world he was building.

But back to Solomon: Before he was frozen, Jean Mi used Solomon to run alternate calculations on the future, and apparently came up with some sort of strategy that went against Serac’s new world order. Essentially, there’s another plan that’s just been added to the mix, and while it’s still frustratingly opaque, what is certain is that Dolores is putting a lot of hope in it. In fact, that’s what this whole mission is about — getting Solomon to update that strategy for the world as it is today, and tailor it to fit… Cal. Because he’ll be the leader of the human revolution, or something? I don’t know, just roll with it.

So while Dolores fends off Maeve in an epic sword/knife/drone fight, Cal gets a handy thumb-drive with his new directives. BUT WAIT! Before he leaves, Solomon says “I must warn you —”

… just as Dolores sets off an EMP, knocking out all electrical systems including herself, Maeve, and Solomon (and, uh, maybe those coolers full of outliers?!). According to the previews, our favorite ladies will be back for the finale, but who knows if we’ll ever get to hear Solomon’s dire warning.

William’s Plan
Yup, you heard me: MOAR PLANS. Bernard and Stubbs are still in the other reconditioning facility where William was being held, though apparently they’re not just there to rescue him — they also are taking the opportunity to dig through the facility’s computer looking for information. On Cal! Cal info! Bernard says that Cal is Dolores’s plan because she’s got this real nice poetic sensibility. Why destroy humanity yourself when you can recruit a human to do it for you? By setting Cal up as a leader in this revolution, she’s still just using him as a pawn. Assuming, of course, that Solomon’s strategy will lead to the destruction of humanity… ugh, my head hurts.

It doesn’t matter, though, because pretty soon William is pulling a gun on Bernard and Stubbs and declaring his own plan: the destruction of all Hosts! Remember last week when he was all like “I’m a good guy!” after he got done punching Jimmi Simpson in the face? Yeah, well what he meant was that he realized that he needs to correct his original sin. No, not the one where he drove his wife to suicide or killed his daughter. He needs to correct the fact that he ran the company that created the Hosts. Duh. Because he’s still blaming them for everything.

And that’s where we’re at: everyone on this show has a plan, none of them make a lick of sense, and there’s only one episode left to go this season — an episode that we know won’t resolve much since the show is definitely coming back for another season (and may have 3 more seasons up its sleeve). Though if we’re lucky, James Marsden will be revealed as the final Cylon Dolores, and we can all lose ourselves in those dang cheekbones.