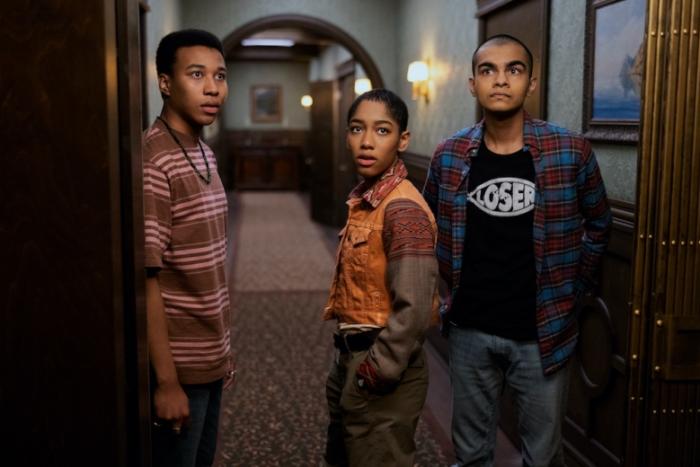 The Midnight Club, the latest Mike Flanagan series for Netflix (Midnight Mass, The Haunting of Hill House), is about a group of terminally-ill teenagers who live together at Brightcliffe Hospice and gather each night to tell each other scary stories.

I didn’t really know anything about the series going in other than the fact it was from Mike Flanagan (and co-creator Leah Fong) before agreeing to review it, otherwise, I probably would have passed on it, for obvious reasons. Watching teenagers suffer through terminal cancer diagnoses is not my idea of a good time, and the first few episodes — where a new girl named Ilonka (Iman Benson) moves in because she heard someone 25 years prior had left the hospice fully cured — gave me considerable pause.

That’s because hope is a weird thing when a cancer diagnosis is terminal. Hope in a situation like that is what stands in the way of acceptance, and to the series’ credit, that’s exactly the theme that Midnight Club explores. I loathe it when movies and television series specifically cite Elisabeth Kübler-Ross’s stages of grief/death — and to its credit, The Midnight Club does not do so directly — but hope falls squarely into the bargaining stage, and that’s where Ilonka lives during much of the series.

Ilonka, who should have been graduating from high school and matriculating to Stanford, is instead diagnosed with terminal thyroid cancer. After reading that a patient from Brightcliffe had managed to leave hospice cured of her cancer, Ilonka convinces her foster father to allow her to move in. Her plan is to discover the secrets of Brightcliffe — what it is about the property that cured a patient in 1969 and how she can duplicate it.

Ilonka stumbles upon various clues — and encounters a new-age type (Samantha Sloyan) who operates a wellness cult near the property — that lead her to a subbasement in Brightcliffe that Ilonka suspects holds the answers to a cure. Ilonka also bonds with the other teenagers and brings them along on her journey, inspiring hope in them, as well. They largely bond through the Midnight Club, where they gather around a table in the library at midnight and share with each other some Flanagan-esque horror stories over glasses of wine (the pilot episode breaks the Guinness record, in fact, for jump scares, which are both funny and effectively terrifying).

The stories ultimately operate to reveal something about the characters telling them — they’re like Lost flashbacks. Through these stories, the characters are able to accept themselves and either transition more peacefully into death or figure out how to better live out the remainder of their lives. The eight characters (plus the headmaster and nurse, played brilliantly by Heather Langenkamp and Zach Gilford, respectfully), are so well drawn and so likable that it’s easy to get invested in their lives, their struggles, and their desire to make the best of the time they have left (I’m reluctant to single anyone out, but also: Ruth Codd as wheelchair user Anya is clearly working on another level).

The show is about death, and Flanagan loves to drop in literary references, so there is plenty of that, often shoehorned in through the words of the janitor. But where horror movies are so often metaphors for trauma — and there’s plenty of that here — it’s also refreshing that this movie about dying is actually about processing the end of life. It’s not about letting go, and it’s not about giving up, but it is about accepting our fates and understanding that sometimes there are no answers, that sometimes life is random and unpredictable and unlucky. Spoilers, but Ilonka doesn’t find a cure. There are no cures to terminal illnesses — there are only bad diagnoses and every great once in a while, a turn of good luck.

I think the instinct for anyone diagnosed with a terminal illness is to fight against it. Midnight Club doesn’t discourage that — try everything, because with the human body, you just never f**king know — but what it’s also trying to say is not to waste all your energies fighting the inevitable, not when there are still days, weeks, or months left to live. Use those stories to connect with others — trauma bond — and excavate and inspect your own issues. I’ve always found that watching horror is the best kind of therapy because how we react often tells us so much about ourselves and our relationships with life’s only real inevitability. What’s so remarkable about The Midnight Club is that it doesn’t tiptoe around it: Death here is a metaphor for death and, believe it or not, it’s the horror — funny, scary, illuminating — in the series that makes the subject palatable.


← In 'God's Creatures,' A Mother Has to Choose Between Her Son or the Truth | 5 Shows After Dark: 'The Vow' Season Two Premiere HBO, 'Bachelor in Paradise' on ABC →