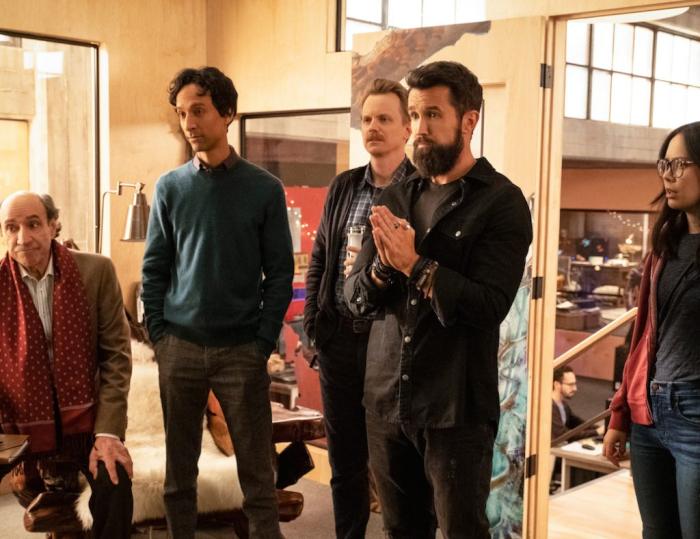 What is Going on with 'Mythic Quest'?

If you have not watched the second season finale of Mythic Quest, please do yourself a favor and vacate this post, because there are spoilers ahead.

After getting sidetracked with C.W. Longbottom’s storyline (the flashback episode was great; the follow-up with William Hurt felt more like COVID-filler, but apparently that’s just me), Mythic Quest returned to the season-long storyline in its last two episodes, specifically the fallout between Ian and Poppy. The two went through a nasty split this season, but had a heart-to-heart and reconciled after Ian’s not-heart attack. The two ultimately also conceded that they’d taken the game Mythic Quest as far as they could and that it was time for them to leave the company and start something new together, specifically a version of the Hera update Poppy had been working on for MQ.

Meanwhile, Brad realized that the only way he could gain respect as a ruthless leader was to take the fall for Jo and go to prison for insider trading. Rachel decided to pursue a writing degree at Berkley, meaning that she and her fellow-tester/girlfriend, Dana, will be in a long-distance relationship (MQ, meanwhile, decided to pay for Dana to study to become a game designer). All of that basically leaves David in charge of a company with a dead-end game, no creative directors, no head of monetization, and down one tester.

The episode very much had the feeling of a possible series finale, particularly with the two leads going elsewhere. The thing is, Apple TV+ hasn’t officially renewed the series for another season, so if it ended here, it’d be a … satisfying ending, although the viewers would be left feeling very unsatisfied that the series would be ending after only two seasons.

Worry not, however. While Rob McElhenney has shifted his focus to his other series, It’s Always Sunny in Philadelphia, he still has every intention of returning to Mythic Quest, although he’s not yet game-planned the third season. However, he did tell Collider that the “biggest risk that we could find there at the end, was to essentially end the show as we know it and see where it takes us,” the operative phrase being, “see where it takes us,” which is to say: They’re still going. They just don’t have a destination yet.

Charlotte Nicdao, who plays Poppy, also expressed excitement about season 3 in an interview with Forbes earlier this season. “I love the idea that there’s this openness to explore a whole different kind of dynamic between them. In Season 1, Ian’s the boss [and] Poppy is kind of his underling. And then [in] Season 2, they have this equal power. And then [in] Season 3, we’re going into this new space, hopefully, where Poppy has got a lot of power. It’s her idea. And I’m personally interested to see what she does with that and what it does the dynamic between the two of them.”

So, no: Mythic Quest, one of the bigger hits on the upstart Apple TV+, isn’t going anywhere. We just have to wait for the streamer to make it official. Related: Did anyone notice the series dropped Raven’s Banquet from its title in the second season? Smart move.

Also, if you haven’t read it yet, check out Joanna’s interview with McElhenney over on Vanity Fair. It’s good.


← 'The Amber Ruffin Show' Is Finally Getting A Live Audience | 'The Mysterious Benedict Society' Ep. 1 & 2 Review: Fish Are Unnerving →