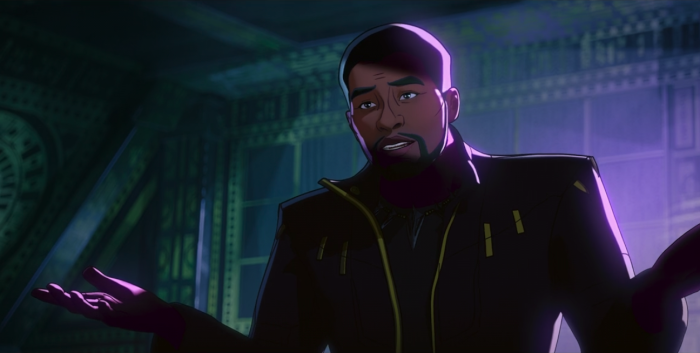 'What If...?' Proves Chadwick Boseman Is The Better Star-Lord

From the moment I found out that Chadwick Boseman’s final performance was in What If…?, I knew it was gonna make me cry. How could it not? If nothing else, Marvel would probably milk it for all it’s worth, right? So let me start off by saying that I didn’t tear up once … until the end credits kicked off with a card dedicating the episode to “Our Friend, Our Inspiration, And Our Hero Chadwick Boseman.” Yeah, that broke me. But the rest of the episode was an absolutely joyous occasion — a celebration of T’Challa that explored what impact he could have had on the universe if he’d been set loose in it. What if Black Panther became an intergalactic Robin Hood instead? All he needed to do was get kidnapped from Earth and become Star-Lord instead of Peter Quill.

With two episodes under its belt, the What If…? formula so far is “What If [Character] Became [Hero] Instead?” It’s a stupidly basic thought experiment, and in the case of last week’s premiere, it didn’t lead to any drastic upheavals. Peggy Carter made a wonderful Super Soldier, and so did Steve Rogers, so while the details may have changed, the overall journey that Captain Carter went on didn’t look so very different from Captain America’s. That’s what happens when you select two intelligent, capable characters to swap. The twist in THIS week’s episode is that … well, T’Challa is intelligent and capable, and Peter Quill is Peter Quill. It’s not a swap of like for like, and the result is a VERY different storyline. As the Watcher explains it, the one tiny divergence in the world from what we know is that when Ego hired Yondu to kidnap Peter, Yondu chose to delegate the responsibility — and his lackeys went down and grabbed any ol’ human with two eyeholes and a mouthhole. Enter T’Challa, who was young and, in a fit of frustration over how isolated Wakanda is, happened to pass through the barrier one night and right into the path of the Ravagers.

This T’Challa is a natural-born explorer who also maintains the capacity for leadership we’re familiar with, so when Yondu takes him under his wing he excels. T’Challa transforms the Ravagers into a roving band of do-gooders, stealing from the rich and giving to the poor. He resolves intergalactic conflicts, and in his greatest caper he … single-handedly defeated Thanos using LOGIC and then recruited the Mad Titan to his team. “Sometimes the best weapon in your arsenal is just a good argument,” T’Challa explains. And look: On the one hand, this is fun because it’s something you’d imagine only T’Challa could accomplish, AND it’s still Chadwick, and all of it feels good and right and beautiful. Under T’Challa, the name “Star-Lord” is celebrated throughout the galaxy! But on the other hand, it is also 100% a demonstration of how lacking Peter Quill is by comparison, and I’m sorry but the petty part of me found that to be good and right and beautiful as well. Like ANYBODY would be a better Star-Lord than Quill is — and that’s always sorta been the point, sure, but it’s still funny to see it played out. Whatever, I’m basic.

So yeah, the Guardians of the Galaxy never formed because T’Challa wasn’t stupid enough to get sent to prison, and that means we don’t see Rocket or Groot or Gamora (Drax pops up briefly as a bartender, and as basically the only character NOT voiced by their live-action counterpart). Instead, Nebula, sporting some fabulous blonde hair, proposes a high-stakes heist that involves stealing some magic seeds from The Collector’s collection. There’s a triple cross, and T’Challa discovers a Wakandan spacecraft and learns his father has been looking for him all these years, and in the end, he brings his Ravager family home to meet his Royal family and they just hang out. It’s sweet, and it’s also a huge departure from the MCU canon we’re familiar with so there’s more novelty on display here. I’m curious if that will be the case each week, that the episodes will take bigger and bigger swings with the continuity we’re used to.

Aside from Chadwick Boseman’s mere presence, there were a lot of bright spots in the episode. Djimon Hounsou gets to cut loose as a version of Korath who is a total Star-Lord fanboy desperate to join the Ravagers, and both Howard the Duck (Seth Green) and Cosmo the Spacedog make appearances. Until the end credits rolled, I was CONVINCED that Benicio Del Toro hadn’t returned to voice The Collector, but he did, so either he’s forgotten what The Collector is supposed to sound like or I have. It was very weird. Still, nothing is better than hearing Boseman’s T’Challa once more, and I’m thankful the episode proved to be such an upbeat celebration of the character. It may not have been the send-off anybody wanted, or the circumstances anybody expected, but we got an extra half hour to enjoy T’Challa in an episode entirely about why he’s the best, and I ain’t mad at it.

The fact that the episode also proves Peter Quill is the worst is just the icing on the cake, I swear.