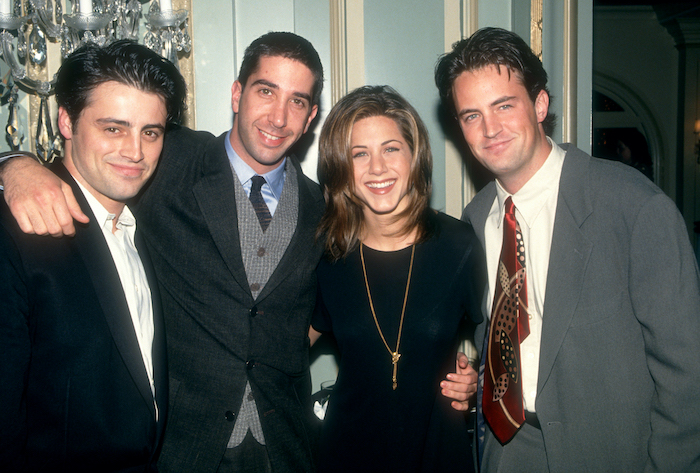 What ‘Friends’ and ‘Outbreak’ Have in Common

It’s sometimes easy to forget that not everyone was as into Friends in the ’90s as I was—yes, that’s right, while I admit that the show left a lot to be desired in a lot of areas, I absolutely loved that show during its original run. In fact, it was the first “grown-up” show I got into, as I was 10 years old during the first season, and it felt very sophisticated to watch a show on Thursday night instead of Saturday morning. I digress.

I give you my bona fides because I have a confession—I forget that not everyone lived through the ’90s with me, consuming all Friends trivia, magazines, Entertainment Tonight episodes, and internet gossip (which was most definitely in its infancy then.) Which is to say that some of you might find the Friends/Outbreak connection I’m about to share interesting because you may not have followed it in real-time, like I did, back in the day.

For whatever reason, when the show first launched, they thought they needed to have more of a hook than a bunch of pretty, white, 20-somethings hanging out and talking—so they gave one of the leads a pet monkey. Now, something about me: the one thing that brings my family together, despite not really liking each other or getting along, is that we all want pet monkeys. We also all understand that the pet monkey industry is horrific (just watch Tiger King to get a taste of how horrible the exotic animal trade is) and those amazing creatures do not belong as pets… but in a perfect world, where I designed the universe, monkeys would have been domesticated like dogs and cats, and we’d all be able to live harmoniously with our monkey friends. Alas and alack, ours is not a perfect world, but I digress.

Yes, Ross (who is the funniest character on the show) had a pet monkey named Marcel, and friends? They got into shenanigans and went on adventures, you know, typical monkey sidekick stuff. Until the end of the first season when Marcel was written off the show, because the cast apparently hated working with the monkey. Per Entertainment Weekly, from a 1995 article:

“I hate the monkey,” David Schwimmer says, sitting in his spartan dressing room backstage at NBC’s first-year smash Friends. “I wish it were dead.”

Side note: I will see you in hell, David Schwimmer.

Marcel (whose real name is Katie) was a damned star, and it wasn’t just Friends that wanted her talents. In 1995, she was the monkey in Outbreak, which is pretty impressive because Capuchin monkeys (her species) don’t even come from Africa where the outbreak in Outbreak originates. They’re found in Central and South America, which means that her talent won out over accuracy. Yes, that’s right—she was the monkey host in which the virus mutated, who was released into the woods by Patrick Dempsey, and then befriended a little girl and was clearly living her best life and going on adventures.

In fact, if you remember, Marcel’s final send-off in Friends (he was initially written off the show in season 1 by being sent to a zoo, but then he was monkeynapped, and somehow became a movie star by season 2) referenced monkey-Katie’s biggest hit to date, when Ross visited Marcel on the set of Outbreak 2: The Virus Takes Manhattan. (Side note: I would definitely watch that movie.)

So the next time Friends and Outbreak come up in the same conversation, you have something to talk about. No more sitting on the sidelines trying to remember if Rene Russo ever guested as a co-star to Joey (she did not) or if Dustin Hoffman played one of Rachel’s bosses (he did not.) It’s your time to shine, friend.