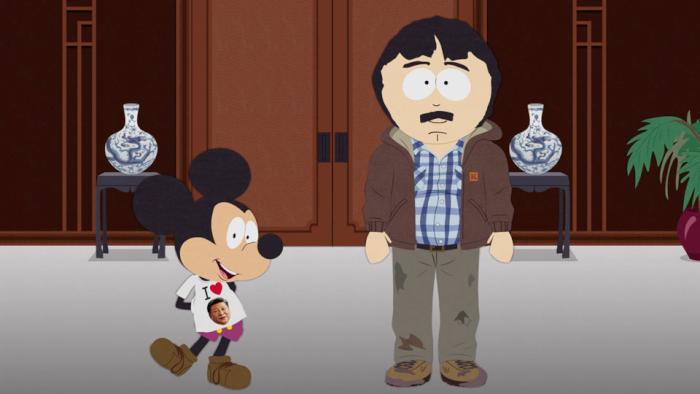 Trey Parker and Matt Stone are 23 seasons in with their iconic animated comedy South Park. A mainstay of Comedy Central and one of the truly defining shows of the late ’90s, the series has had many ups and downs. A lot of latter-era episodes seem to lack the petulant nerve that made them so funny and cutting in the first place, with many moments dipping precariously close to ‘old man yells at cloud’ territory. It’s to be expected for such a long-running show but still a disappointment for a show that prided itself on its take-no-prisoners approach to Gen X nihilism. However, as this week’s episode proved, they can still piss off the right people when they want to.

Band in China, the second episode of the season, sees Parker and Stone take aim at media censorship in China and the ways that the American entertainment industry bends over backward to adhere to these government restrictions. Stan Marsh, still annoyed that his father moved the family out of town so he could start his own marijuana farm, has turned to death metal to vocalize his rage. Alongside Kenny, Butters, and Jimmy, he forms Crimson Dawn and catches the attention of a music producer who wants to make a biopic of the band. Since the old means of making money in music are no longer profitable, he sees this as a way to appeal to a growing market, especially in China. Of course, there are various elements of Crimson Dawn’s life that will need to be edited to appeal to that government.

Meanwhile, Randy, never short of a bad idea, has also flown to China to expand his weed business. He ends up in a prison camp alongside Winnie the Pooh, who is banned in China due to memes comparing him to Chinese President Xi Jinping. The foul-mouthed Jonas Brothers abusing Mickey Mouse returns to try and smooth over matters, but the bear remains a problem that must be taken care of. Yeah, that ends pretty much exactly as you imagine it does.

South Park has been funnier and more insightful but there was something undeniably scathing about this episode that felt necessary in a way the show often hasn’t for many years. This was real punching up and at a target that should have been the topic of mockery for a long time now. It’s genuinely ghoulish how the most beloved entertainment complex on the planet has practically grovelled at the feet of a government accused of the most abhorrent acts, all in the name of profit. The episode takes aim at Chinese officials for their hands-on approach to censoring entertainment as how desires to placate them has led Hollywood to overlook and implicitly condone things like homophobia. If you make a biopic about a major queer icon in music then willingly cut out all those scenes for a Chinese release, what does that say about your priorities and your morals?

Clearly, the episode cut deep in the country because South Park now seems to have been entirely banned in China. As noted by The Hollywood Reporter, it’s far-reaching:

A cursory perusal through China’s highly regulated internet landscape shows the show conspicuously absent everywhere it recently had a presence. A search of the Twitter-like social media service Weibo turns up not a single mention of South Park among the billions of past posts. On the streaming service Youku, owned by internet giant Alibaba, all links to clips, episodes and even full seasons of the show are now dead. And on Baidu’s Tieba, China’s largest online discussions platform, the threads and sub-threads related to South Park are non-functional. If users manually type in the URL for what was formerly the South Park thread, a message appears saying that, “According to the relevant law and regulation, this section is temporarily not open.”

The Hollywood Reporter also notes how timely the episode is given the controversy surrounding the NBA for similar appeasement of China. Houston Rockets general manager Daryl Morey sent out a tweet expressing support for the pro-democracy protestors in Hong Kong. Almost immediately, Chinese broadcasters announced they would stop airing Rockets games, and local sponsors pulled their funds from the team, which forced Morey to issue a series of apology tweets. It’s basically exactly what Mickey Mouse does in the South Park episode, only with less weed.

1/ I did not intend my tweet to cause any offense to Rockets fans and friends of mine in China. I was merely voicing one thought, based on one interpretation, of one complicated event. I have had a lot of opportunity since that tweet to hear and consider other perspectives.

2/ I have always appreciated the significant support our Chinese fans and sponsors have provided and I would hope that those who are upset will know that offending or misunderstanding them was not my intention. My tweets are my own and in no way represent the Rockets or the NBA.

What made this episode so refreshing, on top of a long-overdue target deserving of mockery, was how single-mindedly focused it was on showing appeasement of a dangerous censorship-heavy government is categorical bullsh*t. South Park have a nasty habit of delving into smarmy ‘both sides suck’ narratives that weaken any points they may have wanted to make and push any form of earnestness as stupid. Sometimes, that ‘no-holds-barred’ approach just leads to a strengthening of the status quo. Parker and Stone seem more aware of this than ever. They even did an apology episode of sorts for Al Gore and his manbearpig. Here, there is a clear problem and Parker and Stone have no interest in balancing out the scales to show the pros and cons of corporate censorship for profit.

I’m not sure if Parker and Stone can keep up this well-placed comedic fury all season (and frankly I’m not sure I’ll continue to tune in since I’ve found a lot of latter-era South Park kind of tedious). Still, it’s nice to know that, when they choose the right targets, they can still piss off the right people.

← Why Is Ellen Degeneres Hanging Out with George W. Bush? | Donald Trump Has Finally Angered Lindsay Graham and Fox & Friends →