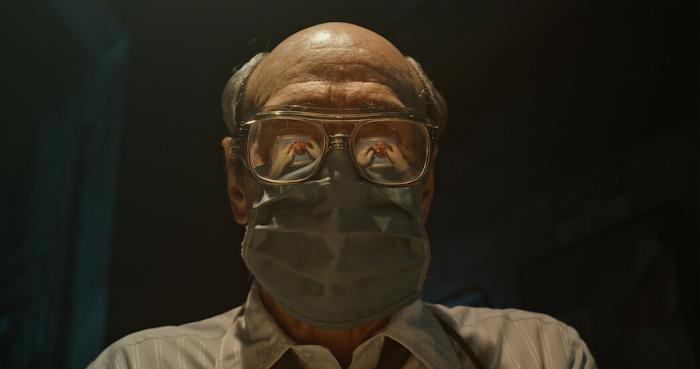 What Awaits Us All In The Darkness of Netflix's 'Cabinet Of Curiosities'?

Guillermo del Toro’s Cabinet Of Curiosities on Netflix is a chimera. Its genetic makeup encompasses the work of so many who came before him, you can feel the distinct influences in each episode. Even in the cold open, which throws it back to Alfred Hitchcock Presents, del Toro introduces every story and its director with this simple nod to the master of suspense.

Cabinet of Curiosities is an anthology series, each episode a drawer within the cabinet. All of them are well-structured, bite-sized stories that clock in at under an hour. Some of them drag. When the storytellers are immersing us in the metaphysical, it’s thrilling and grotesque, but never gory. The episodes where there is more concern for the minutiae of the mundane are where they are slow. The procedural “The Autopsy,” directed by David Prior (The Empty Man), is a sinister, moody, alien invasion story that is more talk than action.

Ana Lily Amirpour’s “The Outside,” stars Kate Micucci (Raising Hope, Garfunkel and Oates) as the ugly duckling presented with a horrifying way to transform herself into a socially acceptable swan. It turns social anxiety into horror, asking what you’d be willing to do to be considered “beautiful.” It’s a slog watching Micucci’s character live her boring life, but there are elements of both Ira Levin’s The Stepford Wives and 1959’s “Eye Of The Beholder” Twilight Zone episode in this one. Bonus points for giving Dan Stevens another vehicle to be creepy and weird.

Two of the episodes are based on H.P. Lovecraft stories. “Pickman’s Model” is set in Miskatonic University’s fine art department and plays out how you’d expect from that scenario. As soon as Crispin Glover’s character, Richard Pickman, is introduced, you know the devil is in the details of the artwork. This time the devil is Yog-Sothoth. Director Keith Thomas’ (2022’s Firestarter) choice of visual effects gives a dizzying and hypnotic sense of motion to the demonic artwork created by Pickman. Those who view his paintings are driven to madness as the art lifts the veil between worlds. Ben Barnes does a good job with his Boston accent and his brooding. I’m not sure what accent Glover was going for. Maybe Popeye?

The other Lovecraft adaptation is less malignant. Catherine Hardwicke (Twilight) directs Rupert Grint in “Dreams In The Witch House.” It’s an almost quaint fable about a dutiful brother who seeks a way to save the soul of his twin sister, who died when they were young. There are no “simple” Lovecraft stories though. So, what starts out feeling like a fairy tale and ends almost optimistically has a lot of complicated story in the middle.

In contrast to those two episodes, “The Viewing” from Mandy writer Panos Cosmatos is a jarring synth-pop-saturated foray into 1979. It’s forty minutes of mood with ten minutes of sheer terror as an excellent payoff. I’d listen to Peter Weller read the phone book, so I didn’t mind. It was a really good vehicle for Charlene Yi and Eric André, who are both a little much, but they fit well into the aesthetic of this story. The production design leans all the way into 1970s Futurism while borrowing visual effects from some early ’80s horror/adventure movies that we all know and love (or are grossed out by, your mileage may vary.)

The less said about Vincenzo Natali’s “Graveyard Rats” the better. This story is three phobias stacked on top of each other in a trench coat. It is very effective if you can watch the whole thing.

The best of the Cabinet’s stories are the bookends. They couldn’t be more different from each other but both manage to tell relatable, human stories wrapped tightly in the preternatural. “Lot 36” is del Toro’s own opening of the series and features Tim Blake Nelson doing what he does best — just being miserable. He’s racist, sexist, greedy, and gets exactly what he deserves at the end. Directed by del Toro collaborator, Guillermo Navarro, this is a fast-paced story that can trace its roots directly to Lovecraft’s eldritch horrors. Just like with Crispin Glover’s appearance in “Pickman’s Model,” as soon as Sebastian Roché appears, you know everything is about to go horribly wrong. You’ve done wrong in your life when you meet this thing in a dark hallway. 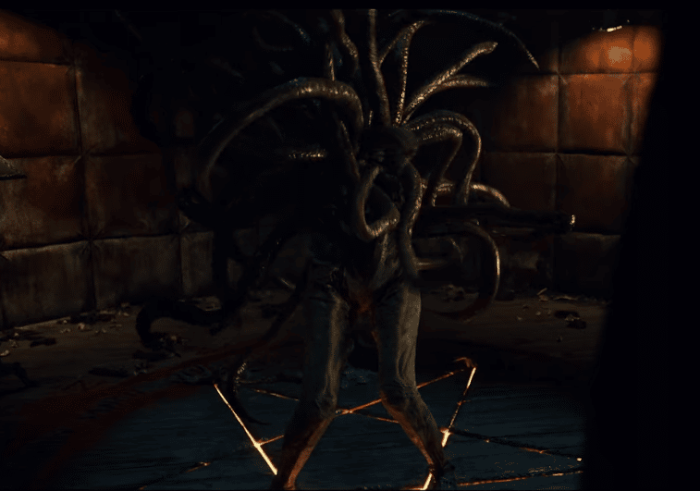 The Cabinet’s final tale, “The Murmuring,” pairs director Jennifer Kent and Essie Davis again in another story about the horrors of motherhood. These two previously worked together on The Babadook but this is a different type of parental horror. It’s one of loss and grief framed in a simple haunted house story. It’s a story as delicate as the little birds our protagonists have set themselves up to document in a secluded coastal home in 1951. This episode is beautifully acted by Davis and Andrew Lincoln — who is almost unrecognizable as her mild-mannered ornithologist husband. There are so many beautiful shots (computer generated or otherwise) of the flock movements of the Dunlins that it feels like it wants to lull you to sleep at the end of a long journey through the Cabinet’s other, darker terrors.

As we close out Spooky Season 2022, there’s something in Cabinet Of Curiosities for everyone to either enjoy or be horrified by. If del Toro wanted to release a new series of stories every October I’d watch them.

All episodes of Guillermo del Toro’s Cabinet of Curiosities are now streaming on Netflix.


← The Pajiba October 2022 Book Recommendations Superpost! | 'Atlanta' Recap: How Disney Made The Blackest Movie Of All Time →