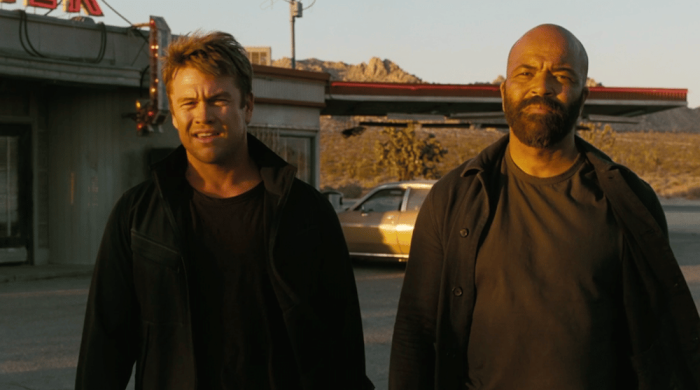 Bernard’s back, baby! Three episodes in and we’ve finally circled back to that one end credit scene from the season three finale, which saw Bernard coming out of the Sublime all covered in dust. What was he up to in there? Oh, just getting a little Host Heaven tutorial from a VERY FINE Akecheta (Zahn McClarnon, making his first return to the show since season two). Turns out the cool thing about the Sublime is that it’s… basically Rehoboam? As in, Bernard can use it to run countless simulations of the real world and pin down the precise path that will allow him to save humanity?

In other words: He’s Doctor Strange in Infinity War. And let’s just pretend that makes Stubbs his Tony Stark!

Speaking of Stubbs: Yes, we found out he was a Host last season, despite what I said in my recap last week. I don’t have an excuse, other than I like flapping my hands around and asking if people are robots — it’s my professional approach! On that note, this week’s episode seemingly confirmed that Caleb is not a robot, because the theme park guns didn’t hit him (they only hurt hosts) and also because of the FLIES. Which are now in his FACE. But more on that in a bit!

So far, this season seems to have a few distinct storylines. There’s Christina, who is (air quotes) not Dolores, and she’s writing loops for video game characters and/or real humans in NYC. Maeve and Cal are running from Man In Black-bot and Crispy Charlotte, only to run directly into them in the theme park — but that doesn’t mean every scene with William and Charlotte is concurrent with Maeve and Cal or vice versa. And now we’ve got Bernard and Stubbs, heading into the desert to help some resistance fighters find a weapon, because this is the path Bernard has foreseen. We know for sure that some part of Maeve and Cal’s story is seven years after the events of season three, but I’m increasingly wary of assuming that’s true for the other plot lines. Bernard could have been in the Sublime for a lot longer than seven years — long enough for Charlotte’s plans to come to fruition, and for an underground resistance to organize. Long enough for, oh I dunno, Cal’s daughter Frankie to grow up into new cast-member Aurora Perrineau even! Just spitballing here! The point is, season four seems to be taking Westworld back to its roots in a lot of ways, and having the story unfold at multiple points in time simultaneously is peak Westworld.

You know what else is peak Westworld? LOOPS! There’s Bernard running countless simulations to predict the future and find the best one — not unlike the way Dolores ran countless versions of Bernard’s programming to make him as close as possible to Arnold. There’s the familiar Gangster World loops, where Kirkland-brand knock-offs of Dolores, Maeve, Hector, and Armistice perform the exact same sequence of actions we last saw in Mesa (Maeve telling Cal not to pick up the can was *chef’s kiss*). Gangster World even has a secret storyline for intrepid guests to discover, only instead of trekking out to whatever the 1920s mobster version of Pariah would be, the park has turned Dolores’s host insurrection INTO its own loop. Fact becomes fiction as Maeve has to guide Cal out of the host war recreation in the fake version of the Delos labs and into the real control center, where they uncover the secret of the flies. Which are being used to infect humans with a parasite, I guess? And that parasite allows Delos to control people via radio waves that are probably being beamed from A TOWER and/or A LIGHTHOUSE?

Even though Christina doesn’t make an appearance this week, it’s pretty easy to see how she could fit into Delos’s scheme. She’s writing the loops that the fly-infested humans are experiencing, perhaps at a point in time when Charlotte has succeeded in turning the whole world into a theme park for hosts! Or something!

So far the season makes a whole lot more sense than I expected, but I still have some questions.

— Why does Charlotte still want to get ahold of Cal so bad, if he already has wiped the Incite computers? What is Cal’s value this season, and why would he have already gone to the lighthouse with Maeve in that flashback (where he nearly died) if he’s just now discovered the secret of the flies in Gangster World? Again, as a professional I have to ask while flapping my hands: IS CAL GOING TO BE A ROBOT, EVEN IF HE ISN’T RIGHT NOW?

— What’s the weapon in the desert that Bernard is leading maybe-Frankie and Daniel Wu to? What does saving humanity mean, at this point? Is he looking for something to wipe the hosts (since he mentions he doesn’t see a future where he himself doesn’t die)? Or perhaps could he be seeking The Forge and its repository of human data, to free people from Charlotte’s control? Is the end game of Westworld some sort of evolution where humans have been digitized, and hosts have sentience, and the lines are so blurred there’s no difference between them anymore?

— What do I need to do to get Anthony Hopkins and Ben Barnes back for this victory lap? I’m sure the show could make it work!

— Are we FINALLY gonna get some James Marsden next week or what? Is he in the real world, or is Christina in the Sublime?