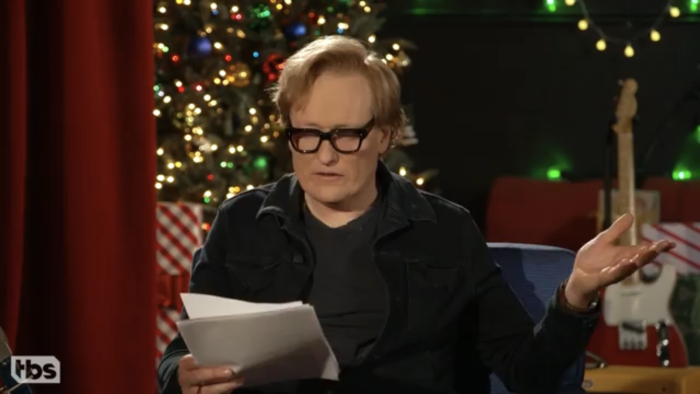 It finally happened! Someone mentioned Andy Richter in a rap song! In the latest song by Starboi3 and Doja Cat (two people I’m totally familiar with because I’m young and hip), Doja Cat laid down the line “She actin’ like an addict, uh. Thicker than Andy Richter.” This was something I first became aware of last week when Andy tweeted the following:

Just texting with my son pic.twitter.com/kOp0kuKVe3

I thought it was just a tweet. A fun interaction he had with his son that I’d never hear about again. Well, I was wrong. Conan decided to make Andy’s new hip hop fame the focus of a whole segment and it was complete with reciting the lyric in question, along with several others.

Conan performed the lyrics without any particular emphasis or rhythm. He would even stop on occasion to explain what certain words or lines meant. Sometimes incorrectly. It was as if he was reading a shopping list, and you know what? It was glorious. I haven’t laughed that hard in a while. Seriously. And like the best kind of laughter, it got my brain going over hundreds of possibilities.

Imagine, if you will, a record scratch, the bass kicks in and just when you think you’re about to hear Digital Underground perform their hit song The Humpty Dance, it’s Conan instead! Just a very dry rendition of “Alright stop what you’re doing, cause I’m about to ruin, the image and the style that you’re used to.” I love that song, but doesn’t Conan saying it make it all sound better?

What I love the most about this whole bit is that I’m not even certain he was doing what he was doing for a laugh. He and Andy actually get into a (somewhat) serious discussion about what Doja Cat is comparing Andy to. It’s all played with such seriousness that the comedy shines through even brighter.

Oh! Also. Andy says “choad” in this segment, after both men have a lengthy discussion about penis girth. Soooooooo… trigger warning? But for laughter? My inner thirteen-year-old was certainly pleased.