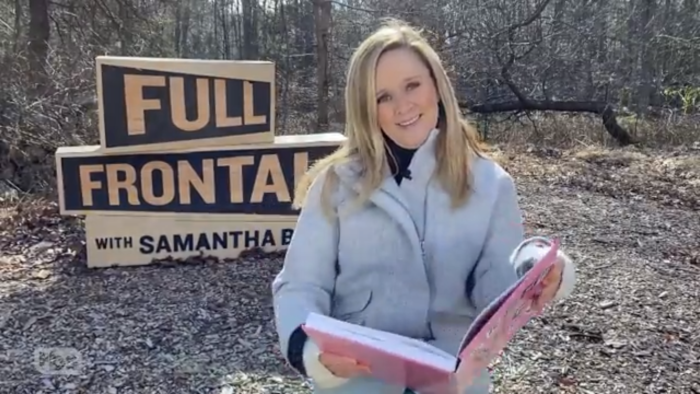 Be honest, you’ve called Trump names during his presidency. At least once or twice, privately or publicly, you’ve called him a crybaby or the Cheeto in Chief or a serial sexual assailant with tiny hands. It’s become an American pastime. At least it has for most Americans because, ya know, the popular vote. However, sling as much truth as you want, but few are as talented at taking down Donald “Insert Insult About His Failed Presidency Here” Trump as Samantha Bee and she has receipts to prove it.

As we sit here, in the last week of the Trump presidency, which feels like years, it’s important to reflect on what was accomplished. That’s what Samantha Bee did in the latest episode of Full Frontal. She presented a Burn Book filled with all the insults she’s levied at Trump over the years. Any time she’s (justly) taken jabs at Donny Dipshit, written down in a handy little scrapbook. Y’all, there are some real doozies in there.

The best part about the book is that to top off the sketch, she burns the motherf***er. Throws it in a pit and sets it on fire. What I love about this aspect of the bit is not only that the book is not easily burned, but that it really illustrates that we will need to (eventually) move on. We can never forget what Trump did to this country, lest we repeat it. However, we can attempt to go about our lives without him living in our heads rent-free. It’ll take some work, but it will be worth it.

← Chris Evans Reportedly Set to Return to the MCU | Ray Fisher Speaks Out Against DC Films President Walter Hamada, Removed From 'The Flash' →