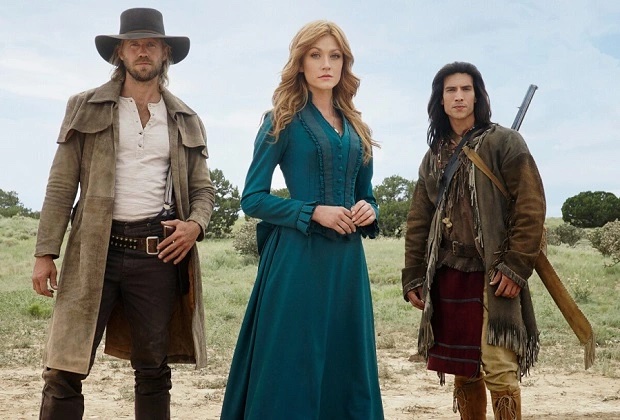 'Walker: Independence' Starts Strong, But Doesn't Have the Legs

I’ve never watched an episode of the original Chuck Norris Walker: Texas Ranger, and I’ve never seen an episode Jared Padalecki’s Walker reboot, either, but I decided to check out Walker: Independence anyway because I heard from someone who is definitely not in the CIA that it had a great pilot. It does have a great pilot, especially for a CW series. Beyond that, I remain skeptical.

Anne Frick’s (Being Human, MTV’s Privileged) series is set in the late 1800s, where Abby Walker and her husband are en route from Boston to Independence, Texas, where Abby’s husband is set to be the sheriff. Not too long before they arrive, however, a masked man robs their stagecoach and kills the husband.

With the help of a Native, Calian (Justin Johnson Cortez), Abby stumbles into Independence only to find that the man she suspects murdered her husband, Tom Davidson (Greg Hovanessian), has also taken his position as sheriff. She also meets the charismatic outlaw Hoyt Rawlins (Matt Barr), who she witnesses rob a bank. Abby surmises that Hoyt is exactly the kind of guy she wants to help her take out the imposter sheriff.

That’s the setup, and it’s not exactly what I imagined it would be from a CW series, namely that Abby and Hoyt take out the sheriff and install Hoyt as the new one before the pilot is over. The scheme to remove the sheriff is actually the arc of the entire first season, or at least the first several episodes. Everyone, it turns out, is not as they seem, and Abby and Hoyt may not have it as figured out as they once believed.

The second episode, unfortunately, isn’t as strong as the first, and while it does contain a wildly compelling twist, it also suggests that the premise may be rife with bloat. Like a good Netflix binge, I suspect that Walker: Independence has a number of twisty signposts but what lies between them may be a lot of frustrating filler. Unfortunately, the characters — attractive Old-West CW types — aren’t yet compelling enough to sustain the space in between. They’re all very hot — and among them include a deputy sheriff played by Philemon Chambers and Katie Findlay is a brothel owner — but they give the series the look of Deadwood as though translated through an Abercrombie catalog. The CW glow overwhelms the dust and tumbleweeds.

It feels like a light version of the Yellowstone prequel, 1883 — a very light version — and as compelling as the plotting might be, it too often feels like kids playing dress up. It certainly suits the CW brand, but given the network’s struggles — and its new owner — I’m not sure that’s a positive. I would love to see a film version of this with some grizzled veteran actors, but I’m not inclined to watch 13 episodes of twists and cliffhangers before the network pulls the plug or, worse, it settles into an 1800s case-of-the-week version of Walker.