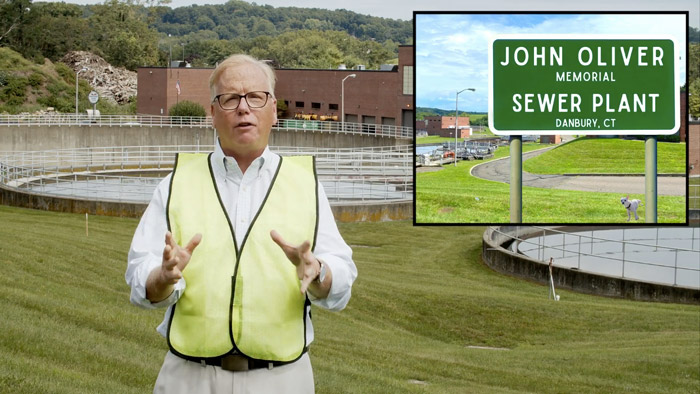 Video: Why A Connecticut Mayor Renamed A Sewage Treatment Plant After John Oliver

Danbury, Connecticut, is furious at John Oliver, and they’re showing this by renaming their sewage treatment plant after the host of Last Week Tonight with John Oliver.

Danbury Mayor Mark Boughton announced the dubious honor in a video posted to Facebook, saying, “We are going to rename it the John Oliver Memorial Sewer Plant. Why? Because it’s full of crap just like you, John.”

Why is Danbury and its mayor going after Oliver? It’s over a history of mocking the Connecticut city.

In the August 15 episode of Last Week Tonight with John Oliver, the English comedian explored how people of color are excluded from the jury pool throughout America. Oliver explained that in Connecticut, two computer errors cut the residents of Hartford and New Britain from jury duty rolls. This mistake cut out 63% of the African-American population and 68% of the Hispanic population in that district from the potential jury pool for years.

“Which is horrible,” Oliver said, “Because if you’re going to forget a town in Connecticut—and this is true—f*ck Danbury! From its charming railway museum to its historic half-stone castle, Danbury, Connecticut, can eat my whole *ss.”

Oliver continued, “I know exactly three things about Danbury: USA Today ranked it the 2nd Best City to Live In in 2015. It was once the center of the American hat industry. And if you’re from there, you’ve got a standing invite to get a thrashing from John Oliver, children included. F*ck you.”

You can watch this section at the 6:16 mark below:

Oliver’s tangent on Danbury was hilariously random, having nothing to do with the subject at hand. But the people of Danbury aren’t laughing, because it’s not the first time Oliver has come for the city.

In 2017, Oliver was discussing economic development incentives. The segment focused on the embarrassing ends to which American cities went to convince Amazon to build a headquarters there. Mayor Boughton pops up, making the same tired joke in his plea video as a string of other mayors.

This is why Boughton mentions in his Facebook video, “And, oh by the way, thanks for showing that Amazon video. We did get Amazon here in Danbury.” However, THR notes Danbury got an Amazon distribution center, not the second Amazon headquarters for which they bid.

When discussing the DNC, he mocked Rhode Island’s delegate for presenting “a calamari ninja” to share the fun fact that fried calamari is the official state appetizer. “It might the first thing I’ve learned about that state that I actually like,” Oliver said, adding, “Aside from—of course—that it doesn’t include the city of Danbury, Connecticut. Because I’ve said it before, I’ll say it again: F*ck Danbury. Babies. Elderly. Pets. Buildings. All of you can go f*ck yourselves.”

Boughton posted his video on Saturday, so was this Sunday night outburst intended as a response? Or was the joke already locked and loaded without knowledge of the sewage treatment plant rename? Why has Danbury earned Oliver’s ire and become a running joke on Last Week Tonight? And lastly, are the people of Danbury genuinely angry? Or do they get this is all in fun, and so are responding with some of their own?

Oliver has not yet made an official response to the Boughton’s announcement. However, considering how stoked he was to have a koala chlamydia center named after him, we suspect he’ll be pleased.

← Kellyanne Conway Resigns After Her Teen Daughter, Claudia, Alleges Abuse | Donald Trump is Considering Pulling a Putin on the Vaccine →